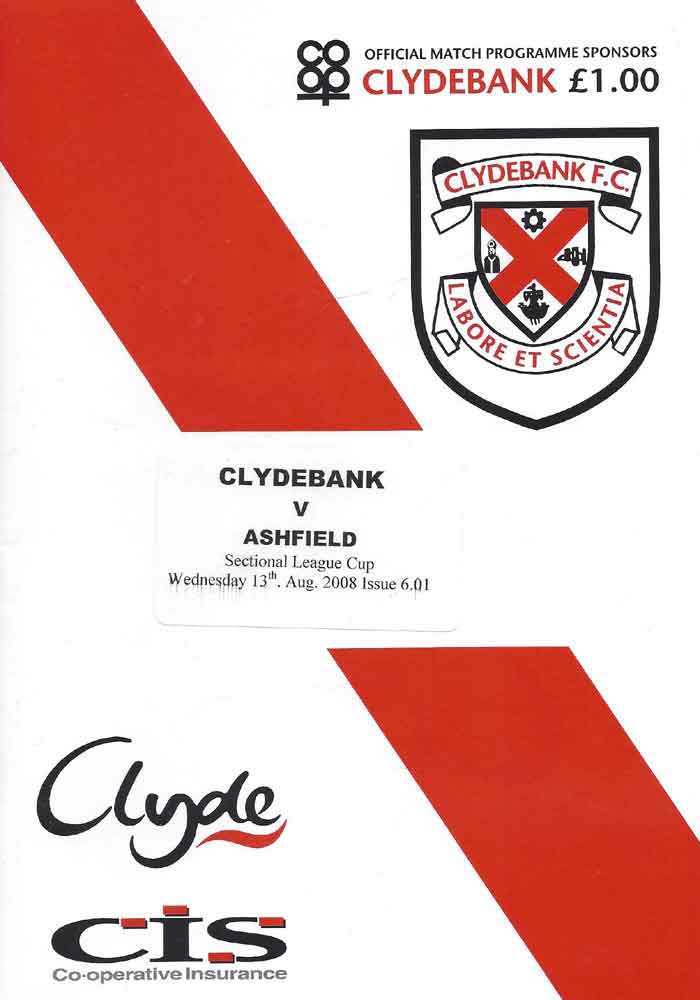 Clydebank made it two wins out of two in the Sectional League Cup by edging out Ashfield by a single goal at Holm park. Not only is the 100% record maintained, but this victory also served to dispel any theories that Holm Park is a ground that the Bankies are unable to win at.

With the Bankies failing to win at Holm Park since returning to the Junior set up in 2003, It was easy to see where these jinx theories sprang up from. However, to get this early win under the belt, means that there is no added pressure, and the players can start to feel at home.

It was an odd performance from the home side, as they set about their task at a blistering pace. Allum and Selkirk both could have scored in the first minute, before the opening, and ultimately only goal of the match was scored in the third minute.

A patient build up by the Bankies, saw Ryan Scobie flick the ball wide to Paul Allum. The wide man charged to the bye-line and waited for the right moment, before sliding the ball back to Scobie who bundled the ball over the line from close range.

And that was it! After that, Ashfield dominated possession for the rest of the match. Maybe, it was the huge changes in personnel from the Maryhill match or perhaps it was because Ashfield, despite their lower league status, are now a progressive side and are capable of beating anyone on their day.

Whatever it was, Ashfield will feel they should have taken at least a point back to Saracen Park. Craig smith and Tony Chalmers were both culpable for passing up goalscoring chances.

It was Stefan Gonet in the Bankies goal who takes most credit for Clydebank's victory producing two vital stops. On the half hour he made a stunning diving save to steer a Smith volley wide of the post, and in the second half he upstaged the previous save by touching a header onto the post when it looked goalbound.

Despite the Bankies not producing their best performance, they did have chances to score a second goal. Most notably, Ryan Scobie crashing a header off the bar, and a John Cunningham attempt that was was desperately cleared off the line.

In the end, the Bankies held out for a vital win, and Budgie McGhie will pleased with this, especially as this is far from his strongest line up. Only five of the starters from this fixture began the Maryhill match, and with guys like Alan Jack and Mark Hailstones not even getting near the pitch, the depth of the squad appears stronger for the season ahead.