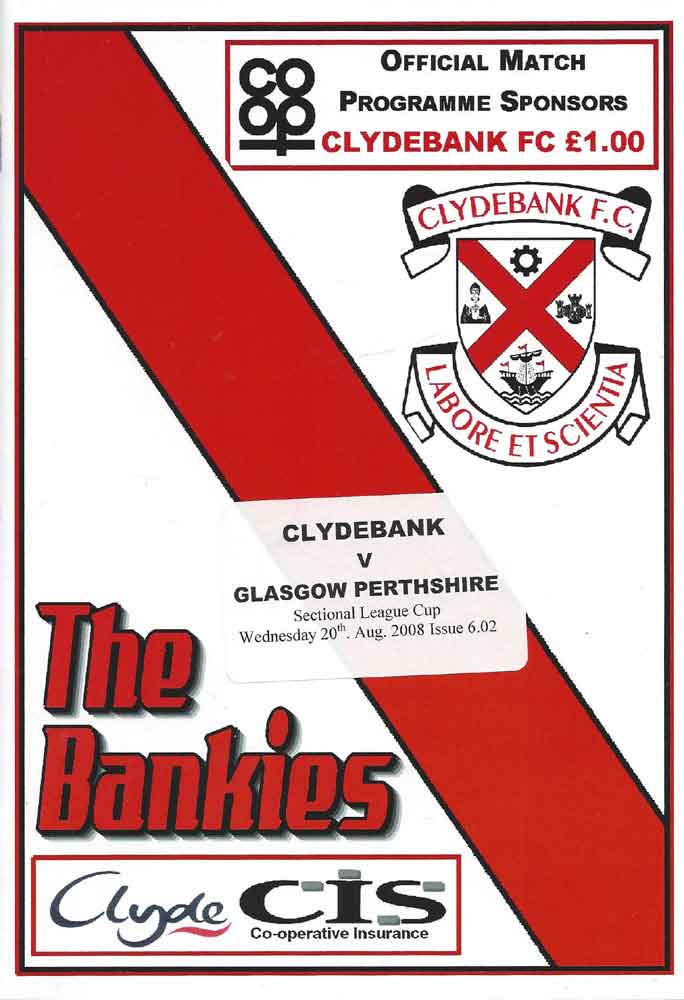 Clydebank made heavy weather of disposing of lowly Glasgow Perthshire at Holm Park by a single goal. The margin of victory was not enough as results elsewhere made sure that the Bankies exit the sectional league at the group stage.

A mixture of poor finishing and fine goalkeeping meant that substitute Gavin Rushford took the plaudits as his debut strike was enough to sink the visitors despite a plucky showing.

The opening twenty minutes of this match were as poor as you are likely to see with mis-placed passes the order of the day. Clydebank certainly didn't look to be two divisions above their opponents.

However, Perthshire's defence looked susceptible to the long ball over the top, and that is the route the Bankies started to find some joy with. Hailstones, in particular, was able to exploit this and twice he should have scored, but the keeper was equal to the task by stopping with his legs. One rasping shot ricocheted back and smacked Hailstones square in the face, and agonisingly slipped past the post

Clydebank began to find their rhythm towards the end of the half, and McInnes missed a sitter after the Perthshire keeper fumbled a Gary Lynn free kick. However, It could have been Perthshire who went into the break ahead as Stefan Gonet was forced into a tipping a header one handed over the bar

It took only two minutes after the interval for the Bankies to threaten the away goal, when Gary Lynn's angled free kick was unfortunate to come off the bar. This set the precedent as the home side continued to carve out many opportunities, but the ruthlessness to put them away was absent.

Selkirk, then Fisher both had attempts at goal that should have been better, before the Shire had their best chance of the match when the No 6 cut inside and let fly a shot that saw Gonet make his second outstanding stop of the night

Mark Maxwell came on with half an hour to go, and twice in the space of a minute he had chances to score. Firstly, he was just wide with an ambitious effort, then the goalkeeper read the angle well as he dived to his right to push away Maxwell's goalbound shot.

As the game seemed to be heading towards a goalless draw, Clydebank finally made the breakthrough. Gavin Rushford made the most of his first appearance in Bankies colours by side footing home from the edge of the box after Selkirk had worked the opening.

Perthshire tried to up the pace in the remaining ten minutes, but din't look to have the firepower to trouble the Bankies rearguard, and the home side were content to take the scoreline as it stood.

Clydebank recorded their third consecutive one nil home victory of the season, and while it is always pleasing to be tight at the back, Budgie McGhie will be concerned over the amount of goalscoring opportunities being passed up. The upside is that chances are being created in numbers, and hopefully the strikers will start to take advantage of this.