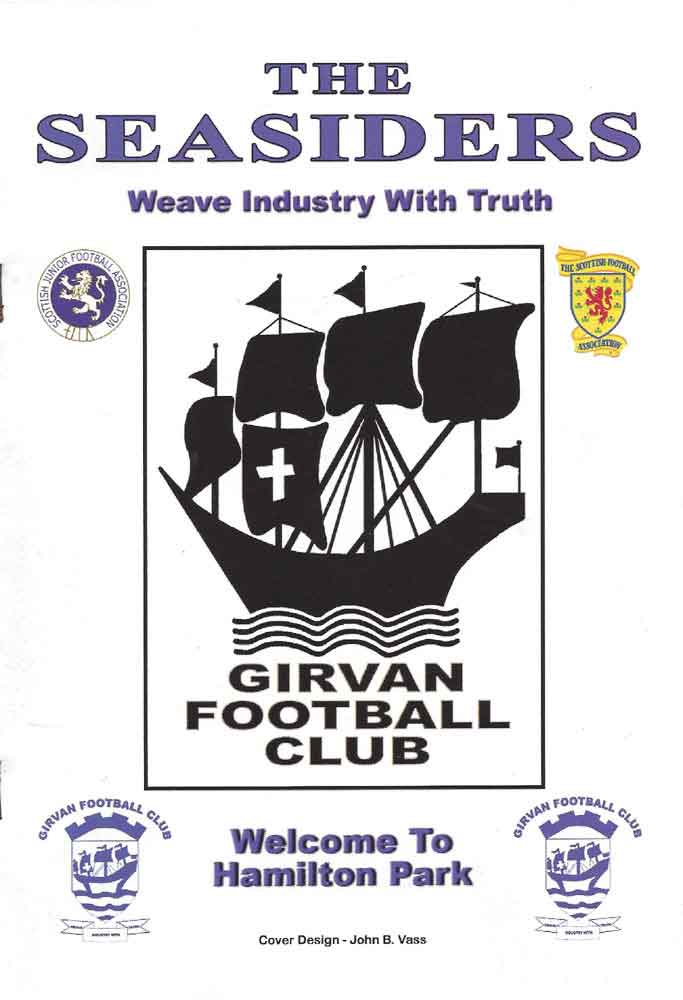 Andy Selkirk scored the decisive goal for the second league match in a row, as Clydebank maintained their 100% start to the league season against Girvan at Hamilton Park.

Having only been newly promoted to the Super League this season, Girvan have shown already that they will be no mugs. Coming into this match they had six consecutive victories under their belt scoring a hatful of goals along the way.

Brimming with confidence, Girvan took the game to the Bankies in the early stages, and ought to have scored when the number 11 spun superbly on the ball, leaving the away defence standing like statues. Fortunately, with only Gonet to beat he hit his shot into the side netting.

The Bankies were struggling to make an impact, but in a magic moment from Alan Jack the Bankies took the lead. From a throw in near the left goal line, Jack did well to hold off a defender, before delivering a cross that Paul Allum bravely diverted high into the net.

With the game, turned on it's head, the Bankies suddenly looked the part, and Paul Allum almost added a second goal minutes later as his back post header went narrowly wide.

After 18 minutes, Andy Selkirk had a glorious opportunity to put the visitors on easy street. Under pressure, the Girvan keeper made a hash of his kick out, and the ball went straight to Selkirk. With a clear run in on goal, The striker's first touch was horrendous and the ball ran too far in front of himself, and the relieved keeper was able to recover. Fortunately for Selkirk, he was to redeem himself later in the match.

As the Bankies closed ranks, Girvan were only able to muster a couple of long range effort, and it was Clydebank who should have scored again before the break. John Jack got himself on the end of a deep cross from Allum, but the midfielder, saw his close range shot turned away for a corner. From the flag kick, Jack again was on the end of it, but this time he headed over

Girvan came out fighting in the second period, and were back on terms after 53 minutes. It was a bit of a disaster for the Bankies defence, as Murphy was able to leave three Bankies in his wake unchallenged before prodding the ball beyond Gonet in off the post.

Parity lasted only two minutes as the Bankies regained the lead. Paul Allum sent in a fine cross, that was controlled superbly on the chest by Andy Selkirk. And the sinner turned to saint as he spectacularly volleyed the ball high into the net.

The quick reply knocked the stuffing out of the Girvan, and the home side didn't really trouble the Bankies goal for the rest of the match. The one chance they did have was due to an uncharacteristic error from Gary Lynn. A free kick to the back post was left by Lynn, however a striker had made a run on his blind side and almost drew the sides level but Stefan Gonet saved well to keep the lead intact.

Kevin Proctor replaced Mark Maxwell, and the striker had a miss he will want to forget. John Jack miscued a shot from the edge of the box that ran into the path of Proctor. He did well initially to get a shot away, due to the attention of the Goalkeeper and a defender. The ball spun back kindly to him, and with practically the whole goal to aim at and his opponents on the ground, Proctor tried to flick the ball over the scattered bodies, but his direction was poor and the ball squirmed past the post.

Newly promoted sides are always an awkward proposition, especially one that has carried the good form from the previous season to the current one. Girvan will take points off many fancied teams at Hamilton Park, so to take three points from this fixture was hugely satisfying. Bankies manager, Budgie McGhie, will be keen to build on this positive start against Renfrew next week, who have yet to get off the mark.