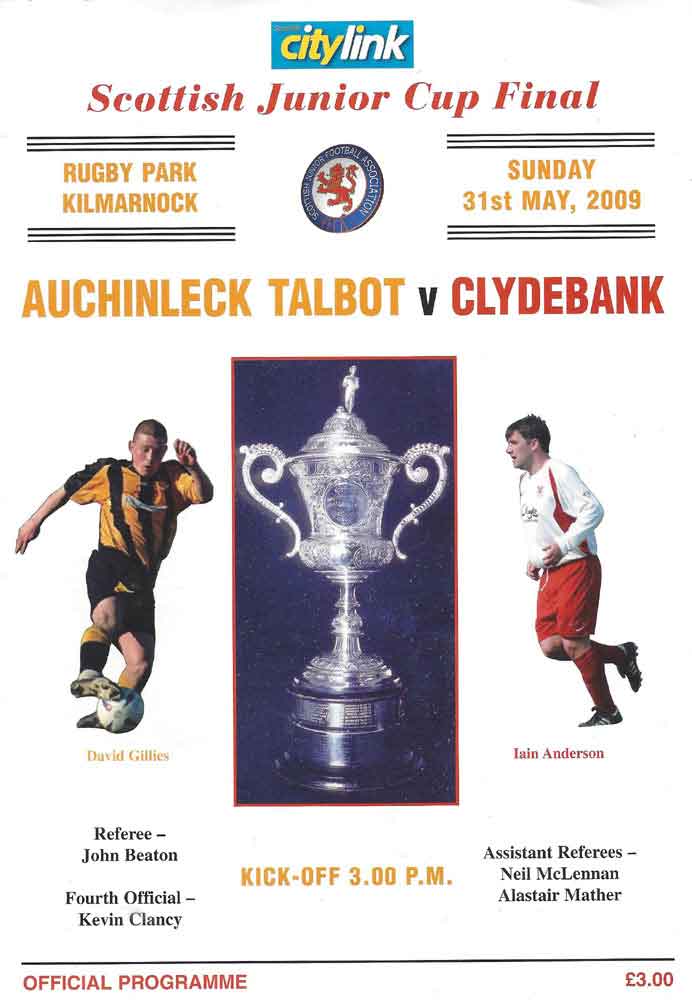 JOB done. That was the word from Auchinleck as Talbot, the Scottish Junior Cup specialists, delivered what everyone in the village and the exiles around the world demanded – the Juniors' Holy Grail back in its special case in the club's trophy room in its centenary year.

Auchinleck's eighth cup win wasn't the easiest, for which full tribute has to go to Clydebank. Roared on by over 3,700 fans, the reborn Bankies gave Talbot a fierce battle in a Citylink Scottish Junior Cup final which more than lived up to the perfect weather.

The Bankies made the better start, forcing three corners in the first six minutes. However, in that opening spell of dominance they passed up a glorious chance in just the second minute. As Brian Smith drove forward a retreating Auchinleck defence dared him to shoot but, with the goal gaping, he opted to pass and the best chance of the first half was lost.

Talbot gradually put the squeeze on their lower division opponents, but, at the end of a goalless opening period, of chances at both ends, it was fair to say the Bankies had missed the better ones. In particular, there was John Jack's failure to find the target with a free header at the back post and a low Chris MacKie cross that narrowly eluded Charlie Hobbs .

Parity lasted until the hour mark, when Talbot won a corner on the left. Bryan Young's set-piece reached the far side of the box, where defender Craig Pettigrew collected, set himself and delivered a superb left-foot cross which Sean McIlroy headed home.

However, Clydebank refused to cave in and within seven minutes had pulled level. The goal was a classic, Hobbs making a blistering sprint down the right flank and crossing for big Mackie to throw himself forward and fire a bullet header past the helpless Adam Strain.

At that point, it was very much a case of game on. But Talbot have been here before and were not going to be denied. The killer goal came 13 minutes from time, with man of the match Stuart Davidson collecting a throw-in on the right, advancing into the Clydebank box then firing a low cross-cum-shot. Stefan Gonet, the Clydebank goalkeeper, saw the ball just too late through a crowd of players and it worked its way into the net just inside his far post.

Ahead with ten minutes left in the Junior Cup final: Talbot don't lose from there and so it proved, in spite of a spirited finale from Clydebank, who never gave up. Indeed Mark Hailstones almost forced extra time when, in the fourth minute of time added on, fired over from eight yards when it seemed easier to score.

By such narrow margins are cups won and lost, so the magnificent trophy is back in Auchinleck, but how well Clydebank played and what a loss this club was to senior football when it fell foul of financial difficulties back in 2002.

There have been worse matches, and crowds, at Rugby Park this season and the entertainment was a marvellous advertisement for the junior code.

Davidson's match-winning performance was all but equalled by team-mates Liam McVey, Pettigrew and the tireless Bryan Young. For Clydebank, Gonet, Stevie Blair and the front pairing of Hobbs and MacKie least deserved to finish on the losing side.

Talbot manager Tommy Sloan, enjoying his second cup triumph as boss, was fulsome in his praise for the Bankies, but added that he was particularly looking forward to a tilt at Senior clubs in the Scottish Cup next season. "That's the biggest thing for me, I think we can beat a team or two in it," he said. "And as a former player with both clubs, I wouldn't mind facing Ayr United or Kilmarnock if we get that far. "Clydebank made it very hard for us, but I expected that and I feel we passed well at times and our effort in that heat was first class. "I was delighted for Sean McIlroy, getting the opener – he's got a lot to learn, but he knows where the goal is."

For Clydebank manager Billy 'Budgie' McGhie, there was only disappointment. "Gutted," he said. "But I felt my players were a credit to the club and themselves. The result could have gone either way and maybe we had the better chances, even if Talbot had the territorial advantage. "In the end they took their chances, we didn't but we gave our all, our supporters were fantastic and I'm sure it's not the last Junior Cup final we'll be in. "Now we have to pick ourselves up for our final league games, since we've still got a real chance of making the promotion play-offs, so we'll need to get our heads up for that."

Match referee John Beaton also deserves praise for allowing the match to flow and keeping his cards firmly in his pocket.

Match report written by The Scotsman