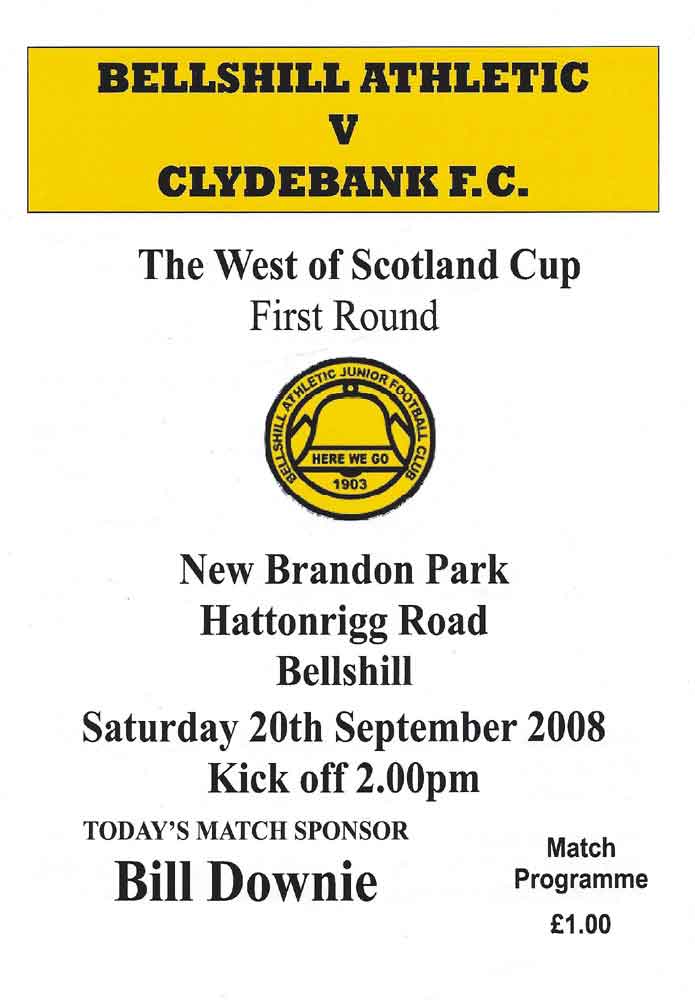 Clydebank progressed to the second round of the West of Scotland Cup after a strong second half showing against Super Premier League Side Bellshill. John Jack rubber stamped the victory after a Mark Hailstones tap in had given the Bankies an early lead.

Ballshill have made a decent start to their league season, so Budgie McGhie would have been expecting his side to be in for a testing time. However, it was the Bankies who were to make a dream start after a calamity in the Hill defence gifted the visitors the lead.

A tame goalward header by John Jack was dropped by McNab after he collided with a team mate. the ball dropped at the feet of Mark Hailstones who had the simplest of tasks to tap the ball into the empty net.

It was probably just as well the Bankies had scored the early goal, as they spent the next half hour under severe pressure. A combination of slack passing and defending too deep, allowed the home side to create several opportunities.

Five decent chances were passed up, two of which should have been converted, as a header struck the post and a close range effort was blasted straight at Gonet.

The Bankies did finish the half marginally stronger, but it was clear that a change in approach would have to be adopted in the second period, if Clydebank were to hold on to their lead.

Budgie McGhie made the vital change during the break with Fisher replacing Jordan, and a quite different Clydebank emerged for the second half.

From the first to the final whistle, the Bankies dictated play and didn't give their higher league opponents a look in. With Fisher adding an extra dimension to the Bankies attacking options, The signs were good as McIntyre headed over from close range just minutes into the half.

Then, Allum missed with a side footed volley when the ball surprisingly carried to the far post. It was only a matter of time before the Bankies extended their lead and it duly arrived on the hour. A sweeping Gary Lynn free kick was bulleted in to the net by the head of John Jack

Bellshill attempted to up the tempo as the game slipped away from them, but their best chance summed up their day, as Boyle crashed a goalbound shot of his own team mate, and allowed the Bankies to clear.

The Bankies could have added to their lead late on with Jack and Selkirk bringing out fine stops from McNab, but the game ended in a satisfying two nil victory.

It's hard to say how this match may have panned out if Bellshill had got on level terms, but Budgie McGhie reorganised the side at he right time, and the players responded superbly. Mark Hailstones worked tirelessly, and has been in great form this season, and new boys Lynn, Jack (J), McIntyre and Rushford can all be pleased with their contributions.