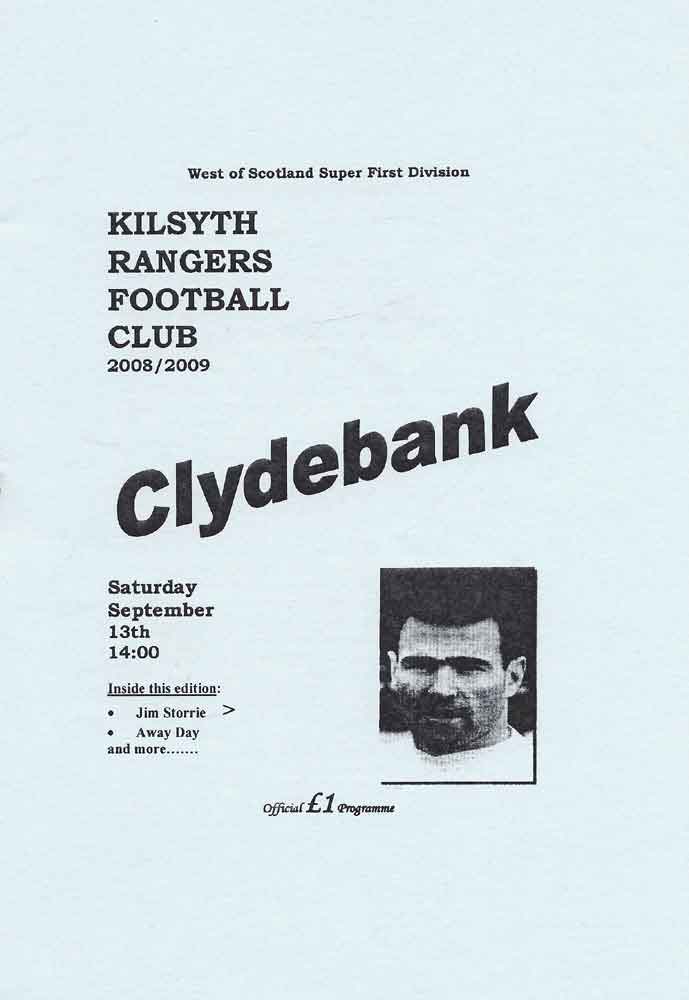 For the second week in a row, Clydebank could only manage a draw after taking the lead. The Bankies were left to rue an Alan Jack penalty miss, as Kilsyth snatched a point in injury time, only minutes after Martin McIntyre had put the visitors in front.

Budgie McGhie opted for one up front with Andy Selkirk the lone striker in this tricky encounter. Hailstones and Maxwell, were encouraged to make it three on top whenever possible.

Neither side created many goalscoring opportunities throughout the 90 minutes, but Thomson for Kilsyth had two great chances early on. He rattled the crossbar with a header, and then drilled a shot just wide from the left hand channel.

It looked like it could be a long afternoon for the Bankies fans, but as the rain started to come down the away side became more involved. Gary Lynn tested the goalkeeper with a low effort, after Hailstones has showed great tenacity to win the ball.

As the half hour approached, the Bankies were awarded a penalty. Selkirk was clearly brought down from behind as he attempted to take advantage of a mis-control by Alan Jack. Jack was to take the spot kick, but his two step run up was read by the Kilsyth keeper, and he saved easily on his right hand side.

In the run up to the break, the Bankies enjoyed a better spell despite the disappointment of the penalty miss, but were unable to make any clear cut chances

For the most part, Clydebank were the better side in the second period, but did not pose much of a threat in front of goal. Kilsyth's early threat had also petered away and the game looked like it may trundle aimlessly towards a goalless draw.

Perhaps, Budgie McGhie could have altered his tactics in order to go for the winning goal, but it looked like he got it right when the Bankies took the lead with only five minutes remaining

Clydebank hadn't had many free kicks around the penalty box. However, On one of the few occasions that the Bankies were able to send in a cross from a set piece, it bore fruit. Under pressure from Selkirk and Hailstones, the Kilsyth Keeper punched his clearance into the ground. As the ball bounced up, substitute McIntyre nodded the ball towards the empty goal, and it hit the net beyond the despairing Kilsyth defence.

It looked as though McIntyre's counter would be enough to hand the Bankies all three points, but Packham conceded a silly free kick on the edge of the box in injury time. This was the chance Kilsyth they were looking for. Thomson's strike was well save by Gonet, but could do nothing as substitute, Baird rammed in the equaliser

A draw was probably about the right result, but Budgie McGhie will be disappointed to have dropped points again, especially after his side had got their nose in front at such a late stage in the match. However, on the positive side, the club have now seen the first four league games go by undefeated. It is now important to turn these draws into wins.