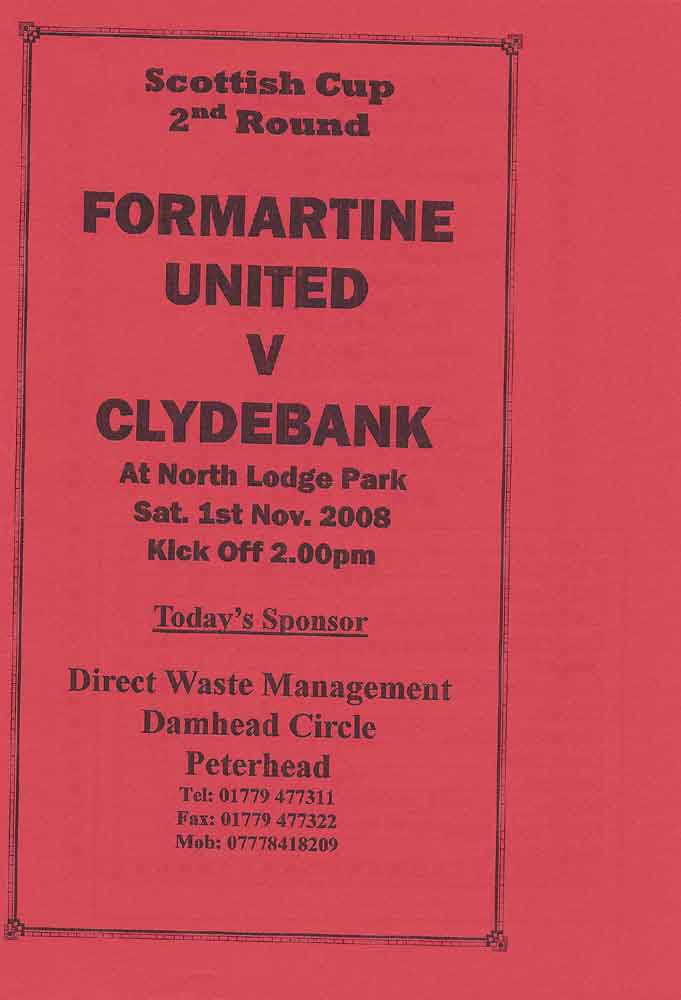 Around a hundred or so fans made the long trip to the village of Pitmedden to see John Jack's headed goal secure the Bankies passage into the third round of the Scottish Junior Cup against a spirited Formartine United side.

The Bankies recent form suggested this would be anything but easy, and the home side set about their task at a high tempo. However, the Bankies rearguard hasn't given too much away this season and weren't unduly troubled.

As the half wore on, and Formartine failed to make the early breakthrough, the Bankies began to assert themselves. After 19 minutes, the visitors should have taken the lead when a United corner was cleared into the path of Alan Jack. With only Ryan Scobie ahead of him, he played a tremendous 40 yard pass to put the striker clean through on goal. Unfortunately,Scobie never looked to have the ball completely under his control, and his shot was saved by the advancing Horne in the Formartine goal.

From the following corner. the Bankies were presented with another opportunity to open the scoring. Alan Jack's 20 yard effort was intercepted by Hailstones, but he dragged his shot wide of the goal.

The Bankies were enjoying their best spell of pressure, and another chance fell to debutant Brian Smith, when the ball broke kindly to him. instead of putting his boot through the ball, he elected to side foot his shot, and it was deflected for a corner. This was the decisive moment of the match as the Bankies finally took the lead. The back post corner was met by the impressive John Jack whose downward header entered the goal beyond the despairing dive of Horne

Ryan Scobie could have doubled the advantage shortly afterwards, when he got too much of his head onto Alan Jack's corner kick, and the ball spun over the bar. For all their endeavour, the home side had not had an attempt of note in the first period, and Budgie McGhie entered the pavillion happy with his side's efforts.

The second period was a much more lacklustre affair from the Bankies point of view, with very little happening in the Formartine penalty box. Mark Bowie, who had replaced Scobie came closest when he diverted a Gary Lynn free kick wide of the post.

Midway thorugh the second half Formartine showed that a single goal lead is a precarious position to be in when Bob Maitland made a penetrating run from midfield and forced Gonet into his first real save of the match. Had the winger taken the few extra yards he had in front of himself before shooting, it may well have been a different game.

Two minutes later, and you would have been forgiven for thinking it was all over when Shinnie was shown a second and harsh yellow card in a game that was never dirty. If anything, the home side were galvanised by the situation and for the remaining twenty minutes it was difficult to see who had the ten men.

If you plug away, you will always get a chance and Formartine got their opportunity after 73 minutes. A corner from the right skidded off a couple of heads and sat up nicely for Young. With his back to goal, he hit a perfect overhead kick, and but for a top drawer reaction save from Gonet the scores would have been level.

Despite pushing the Bankies all the way, the equaliser remained elusive and the visitors held on to go into the hat for the next round.

Budgie McGhie will be pleased to have come away with a positive result, however the lack of goals is still a concern as this game could have been over by half time. With a visit to high-flying Lanark United in the league next up it is a game the Bankies can ill-afford to lose. Still, confidence will have been boosted with this timely victory.