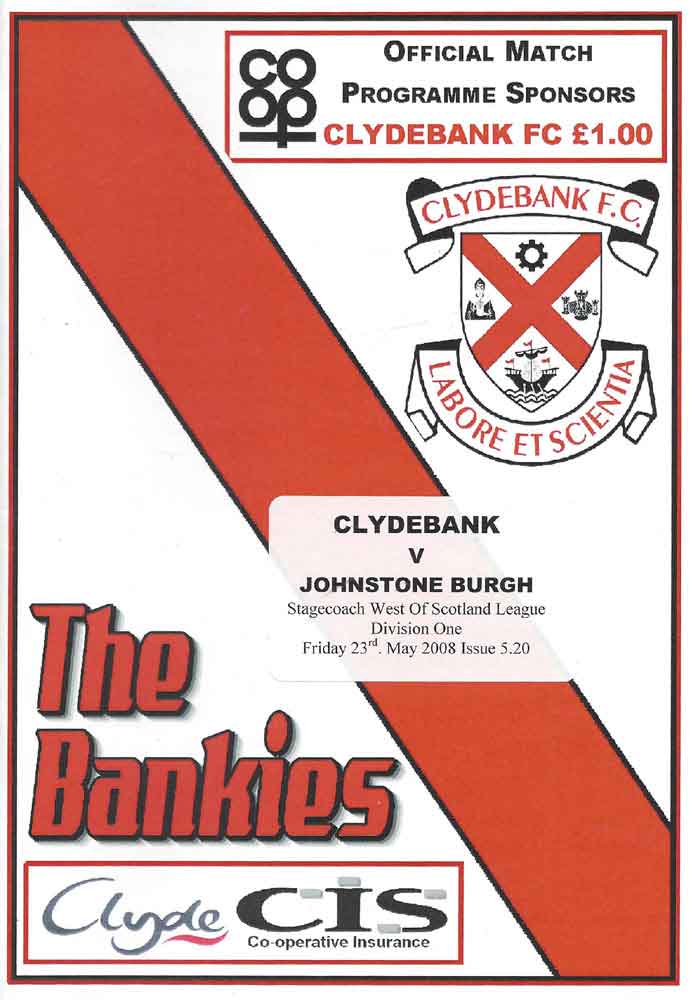 From the sublime to the ridiculous is how the saying goes. And that is the story of the past week. four superb victories in a row were wiped away as the Bankies went down to a humiliating home defeat against Johnstone Burgh who had failed to win in any of their previous 24 matches or score more than one goal in any of these games.

Two goal hero for the Burgh was Ross Perry, who for those with long memories will remember his handful of appearances for the Bankies in our first season back in the juniors.

It may have been a different game if Brian Miller had converted his 16th minute penalty kick, but his woeful attempt didn't even come close to hitting the target.

Five minutes later, and Clydebank's night to forget truly begun as Corr failed to hold a cross ball. Perry said thank you very much as he hammered the loose ball into the net.

After 32 minutes the pressure was off the scale as the burgh went two up. Armour curled a free kick high into the net as Corr and his poorly positioned wall stood like statues.

The Bankies were making chances, but didn't have the fluidity of recent matches. However, a lifeline was grasped on the stroke of half time, as Proctor latched onto a cross ball and slid it past McMahon to cut the deficit to one.

Clydebank moved up a gear at the start of the second period as they went in search of an equaliser. Hailstones twice and Proctor had attempts on goal, but didn't force a decent save out of McMahon.

At the other end, Corr in the Bankies goal almost gifted Burgh a third as he made a real hash of collecting the ball. He recovered to grab the ball, much to the anger of the nearby Burgh players who thought the ball clearly crossed the line.

After 62 minutes ex-Bankie Ross Perry gave away the second spot kick of the evening after stupidly punching the ball away from a dangerous cross ball. Captain, Gordon Lappin stepped up and slotted the ball into the net.

At this point, most supporters were thinking of completing the comeback, however burgh had other ideas. Packham gave the ball away deep in his own half and in a move belying their lowly position, Perry finished off a great piece of play involving Ferris and Marr.

Even with twenty minutes still to go, the Bankies were unable to make any head way against a side cobbled together with young amateurs and suffering from a streak of ten straight defeats. The final whistle was a great moment for the small posse of Burgh fans, but a dismal night to be a Bankie.

Despite the Bankies hectic fixture schedule, Budgie McGhie will find it difficult to forgive his players for such a shocking display. Thankfully, the Bankies still have four games to secure their position in this division, and put this one down to a bad, bad day at the office.