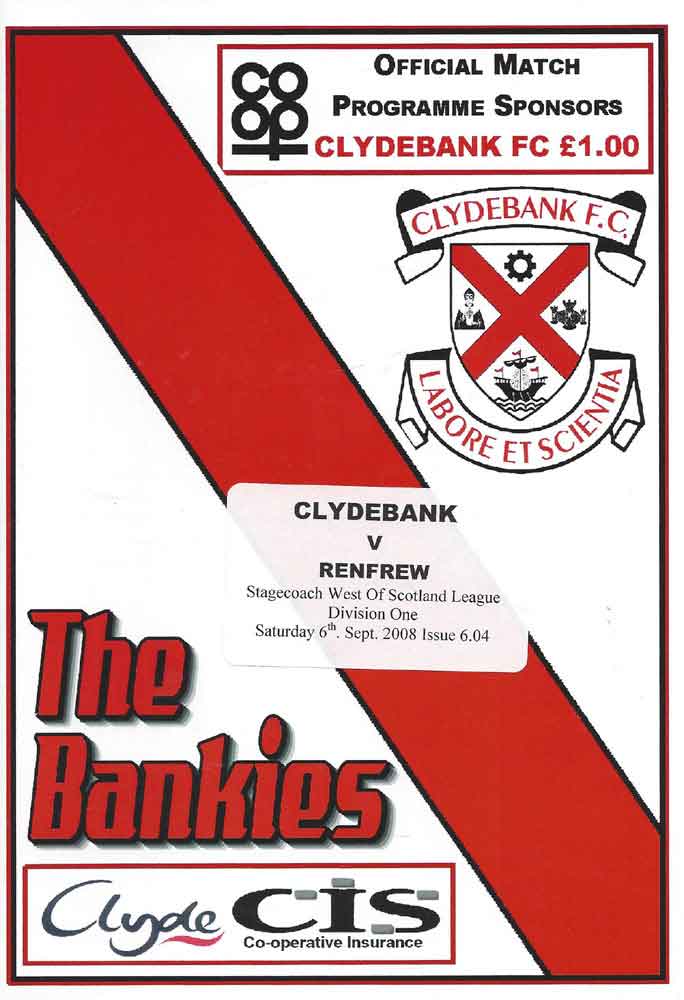 Clydebank had to settle for a point against bottom side Renfrew as they threw away the lead twice in a match that they dominated for long spells.

From the very beginning of the match, the Bankies looked like they would build on their 100% start to the season. within the opening ten minutes Jack and Fisher both had goalscoring opportunities, but neither player made a good enough contact with the ball

The ever alert Hailstones almost grabbed the lead when he took advantage of a defensive mix up. He intercepted a headed back pass, but his acrobatic lob didn't have enough power and was cleared off the line.

Midway through the half, Alan Jack shot over the bar, before Renfrew had their first real opportunity when Mort fizzed a diagonal shot past he post after an impressive build up.

The Bankies continued to press for the opener, and it nearly came on the half hour when Jack's blistering drive came off the chest of Marshall. Selkirk was in close attendance to pick up the rebound but the linesman flagged for offside

THe hard work and endeavour were to pay off, however. Great credit goes to Paul Allum, whose determination to keep possession of the ball was matched only by the quality of his cross into the box. Hailstones controlled the ball superbly on his chest, and with some work still to be done he made space on his right hand side and hammered the ball into the net.

with all the momentum behind the home side, it looked like a second goal before the break would give Renfrew a mountain to climb. A fantastic breakaway involving Lynn, Hailstones and Alan Jack almost brought that goal. The culmination of this break saw Alan Jack nutmeg a defender, and with wonderful vision he lobbed the goalkeeper only for the crossbar to come to his rescue.

The Bankies were made to work for their goalscoring chances, and it was quite galling to hand Renfrew the equaliser with a defensive lapse. A hopeful punt up the park was horribly misjudged by Soutar, and Reid who had all the time in the world drove the ball low into the corner past Gonet

Well, it was back to square one at the start of the second period, and the Bankies, once again, set about the task of wearing down the Renfrew defence.

It took a while for the chances to come, but come they did. Fisher was first to get sight of goal, but Selkirk's attempted overhead kick did enough to put him off and the ball squirmed wide.

Alan Jack took advantage of a nice dummy from Soutar, but his goalbound shot was blocked by Gordon on the line with goalkeeper Marshall beaten.

Peter Jordan had a trio of chances. He was put clean through on goal by Alan Jack, and his first shot was charged down by Marshall. Alert to the rebound, jordan beat the goalkeeper to the ball, but this time a defender was on hand to clear off the line.

It was to be third time lucky for Jordan, though. In another quick break, Selkirk crossed the ball perfectly to the midfielder, and this time he calmly slotted the ball into the net to restore the Bankies lead

The Bankies continued to carve out opportunities as they sought to finish the game off. Hailstones, showed how dangerous he can be as he stole in between the goalkeeper and defender to intercept the ball. Unfortunately, he dragged the ball too wide and despite a credible effort the angle was too much.

There was a distinct aroma of deja vu about what was to come next. Despite contributing nothing to the second half, Renfrew did exactly as they did in the first half and equalised. Renfrew were awarded a bit of a nothing free kick which was flighted to the back post. The Bankies marking was completely absent as Carson headed impressively into the net from a tight angle.

Renfrew could actually have stolen it when Gordon's low drive to gonet's right hand post missed by a whisker. It would have been a travesty, had it gone in, and despite one last ditch attempt by Bowie the scores remained level.

This result is quite a hard one to take. To not take three points from this match, after the chances created, is disappointing. However, there is no need to be too downbeat as results elsewhere saw the Bankies climb up to second place in what looks likely to be a very tight league. Clydebank visit Kilsyth Rangers on Saturday who could provide the Bankies with their toughest test yet.