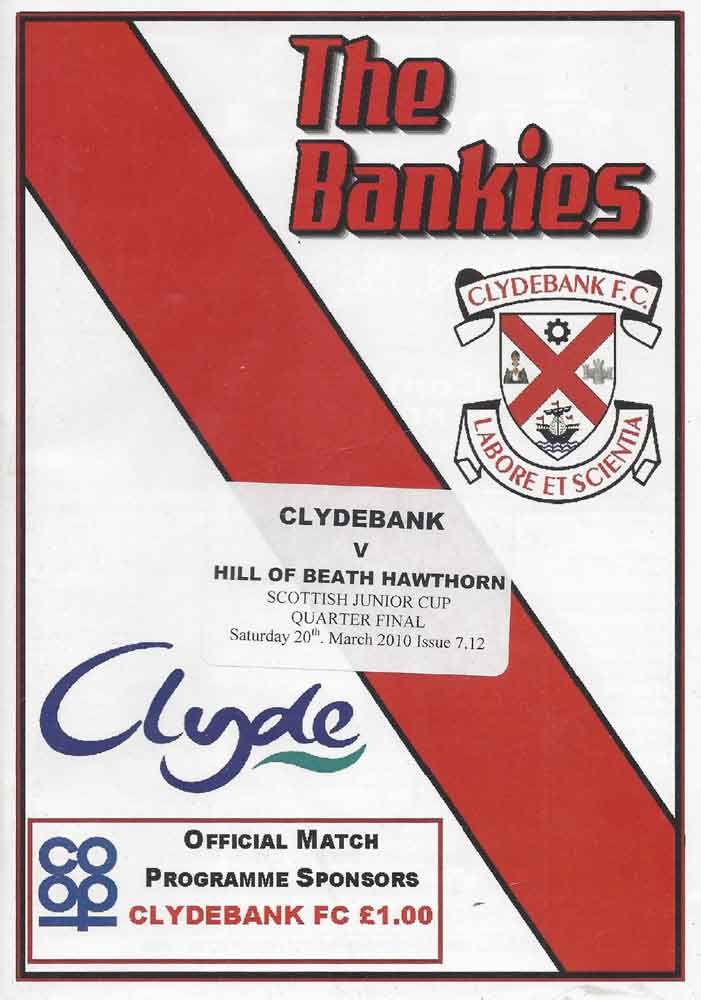 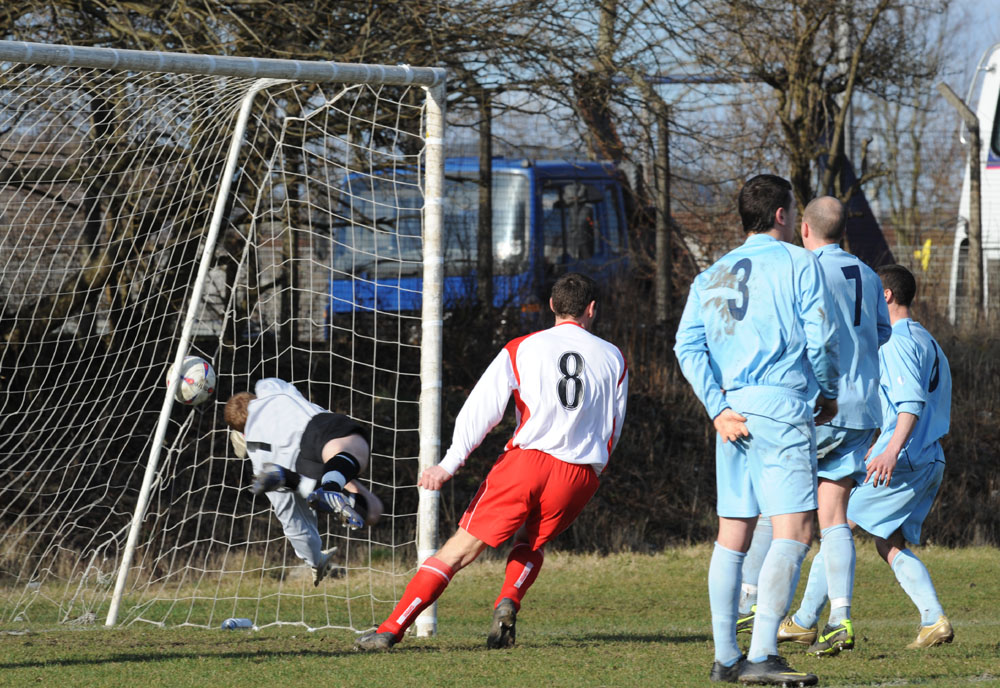 Jubilant Bankies progressed to the semi final of the Scottish Cup for the second year in a row, despite going behind to an early goal against Hill of Beath Hawthorn this afternoon.

A healthy crowd witnessed a tense affair at a sun drenched Holm Park, which began in disastrous circumstances for the Bankies. The Haws have been in sparkling form in the East Region this year losing only once in 18 matches, and they confirmed their credentials by taking lead in only the second minute when Stewart cut inside from the right wing to drill the ball low past Gonet to give the visitors the lead.

Hill of Beath's were knocking the ball about with great confidence in the early stages, as you would expect from a side on a 10 match-winning streak. Stewart's pace was causing problems, and he set up Smith who had broken free, but he ballooned his shot over the bar.

he Bankies gradually eased themselves into the match and two quick fire long attempts from Mackie and Harvey after the quarter hour mark, finally signalled Clydebank's arrival to the game.

As the half wore on, the Bankies began to exert more pressure without particularly threatening the Haws goal. In fact, the visitors tactics of hitting on the break nearly paid dividends when a Stewart cross was met at the back post by Smith, who with the whole goal to aim at, contrived to miss by a mile

The first period ended in with the Bankies receiving 4 further bookings to Dallas' early yellow card, as tempers began to flare with a number of decisions going against the home side.

The Bankies needed the interval to calm down, regroup, and channel their anger into something positive, and they did this in fine style

With only 6 minutes on the clock, Gary Lynn flighted in a free kick from the right hand side. Ross Campbell timed his run to perfection, as the big defender hardly broke stride as he nodded the ball high into the net to claim his third goal of the season

Suddenly, it was a different game as the Haws received a couple of yellow cards, and before the hour mark the comeback was complete.

A rash foul on Smith was rewarded with a free kick and a yellow card for McCulloch. Practically on the throw-in line around 20 yards out, John Harvey swung in a vicious free kick, that was deflected into the net by a Haws defender to give the Bankies the lead.

With roles now reversed, the Bankies were happy for Hill of Beath to come on to them, and hit on the break when the chances arose. Inevitably, with half an hour still to go there would be a few narrow squeaks, none more so after the Haws were awarded a penalty after 71 minutes after Gemmel was felled by Harvey.
Bathgate stepped up and hit the spot kick to Stefan Gonet's right hand side, but the Bankies keeper dived magnificently to push the ball away, to the joy of the Bankies support

Hill of Beath were visibly shaken by this miss, and although they continued to press they never looked like getting back on level terms. If anything the Bankies could have increased their lead.

A superb passing move involving Mackie and Hailstones led to the former laying the ball off to the latter whose side footed effort was well stopped by Hall. Then great work by Allum on the right wing led to his cross being spilled by Hall. In the Melee that followed, Brian Smith was unlucky to see his shot deflected for a corner. From the resultant corner, John Jack rushed at the ball, and unluckily for the Bankies midfielder had the ball gone anywhere other than straight at the keeper it would have been a goal

The ref added on almost a full 5 minutes of injury time but the Bankies held on to the lead comfortably, and passage to the semi final was once more ensured.

This is a terrific achievement for the Bankies to reach this stage in the national competition for the second year in a row. Considering that the club are still competing in the second tier in league terms it reinforces the Bankies growing standing in the junior game.