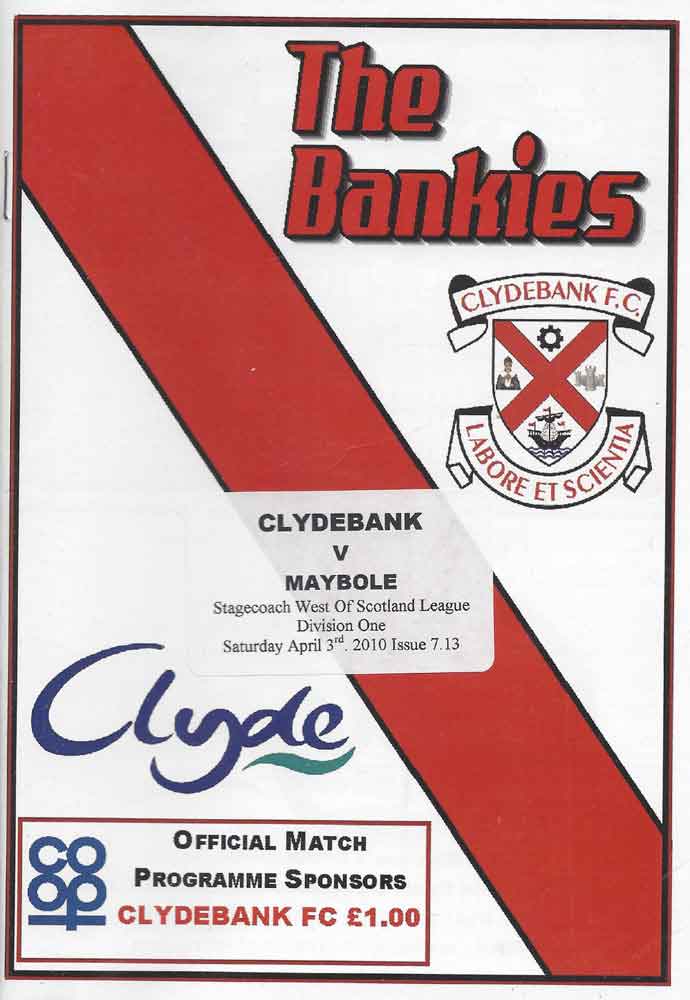 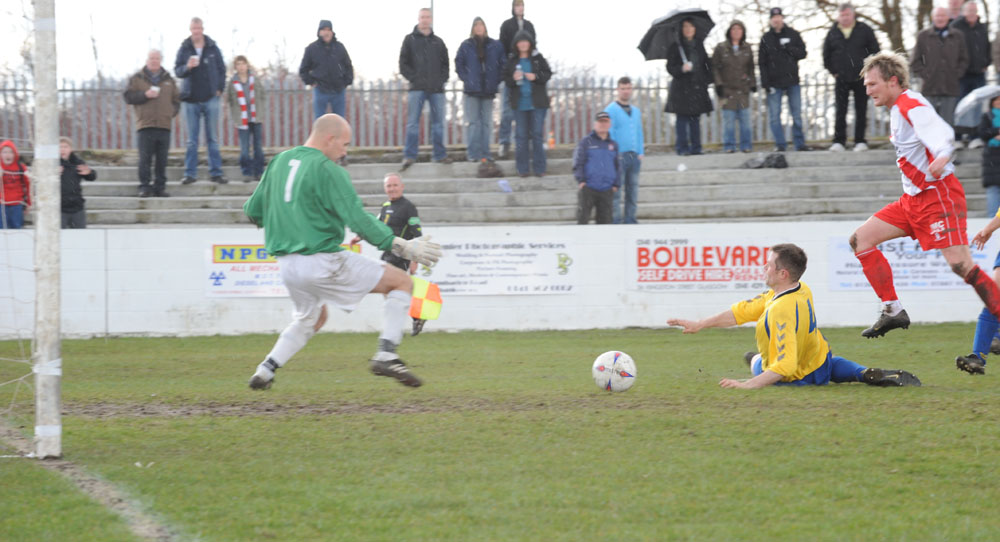 Clydebank prepared for their Scottish Junior Cup Semi Final next week with a 2-1 victory over Maybole in the league. The Bankies came into this game knowing anything less than 3 points would damage their promotion hopes, especially, with Cumnock, Rutherglen and Renfrew starting to break away at the top

The home side began the match in positive fashion with Dallas earning a free kick just outside the box. Lynn slipped the ball to Mackie, but the striker's shot sailed well over the bar. The Bankies were making all the running in the early stages, and Hailstones was unlucky when his first time drive was tipped over the bar by McAulay

Pressure continued to build on the visitors and on the quarter hour mark, Mackie played a fantastic one-two with Dallas and he was unlucky to see his prodded shot just go the wrong side of the post. Minutes later, and the Maybole goal escaped again when a vicious Harvey cross skidded off the top of Reilly's head, but McAulay touched the ball around the post brilliantly to keep the scores blank.

It couldn't go much longer like this, and it didn't. An old fashioned lump up the park was helped on goalward by a Maybole defender. Stevie Dallas read the situation perfectly, as he ran onto the ball and slammed it high into the net beyond McAulay.

After this initial flurry of pressure, the rest of the first half became bogged down in the middle of the park. Maybole had a couple of long range efforts that didn't worry Bankies keeper, Stefan Gonet too much. It actually took until the stroke of half time before another decent opportunity arose, as Dymock was the beneficiary of a lucky break. However, the Bankies front man couldn't dig the ball out properly from under his feet and his left footed shot went disappointingly wide.

Clydebank have dropped points in their last two league games, when they should have taken the maximum, and they looked to be ruing their first half misses when Maybole got back on level terms within five minutes of the restart. Crawford went on a mazy run leaving a trail of Bankies defenders before drilling the ball past Gonet. A fine goal from Maybole's point of view, but a poor goal to lose from the Bankies side of the fence.

Maybole were buoyed by the goal and began to exert some pressure of their own, and McDonald sent a snap shot wide of the post. The Bankies got their act together just before the hour as they regained the lead with one of the best goals of the season. Stefan Gonet threw the ball to Paul Allum who broke forward quickly. He pinpointed his pass to Stevie Dallas who flicked the ball and turned his marker wonderfully. He raced down the right wing and fired in a superb low cross, which Stevie Dymock controlled perfectly and slotted home with his second touch. All in all, from goalkeeper to goal in around ten seconds with the minimum of touches.

This nipped Maybole's resurgence in the bud, as they seemed to be knocked off their stride by falling behind. The introduction of Smith and Jones from the bench added extra energy to the side, as the Bankies created a burst of chances. McInnes, Dymock and Smith all saw chances go a begging to put the game to bed.

The last five minutes of the match saw the Bankies become more edgy as they tried to protect their single goal lead. Although, Maybole never created any real dangerous moments the Bankies allowed themselves to be pushed back deeper and deeper as thoughts of recent dropped points came back. however, this time the Bankies held on to their lead and claimed a valuable three point in their promotion quest.

Not the prettiest of games, but a win is a win and it keeps the club in touch with league leaders, and also keeps confidence levels high going into the Scottish Cup next week