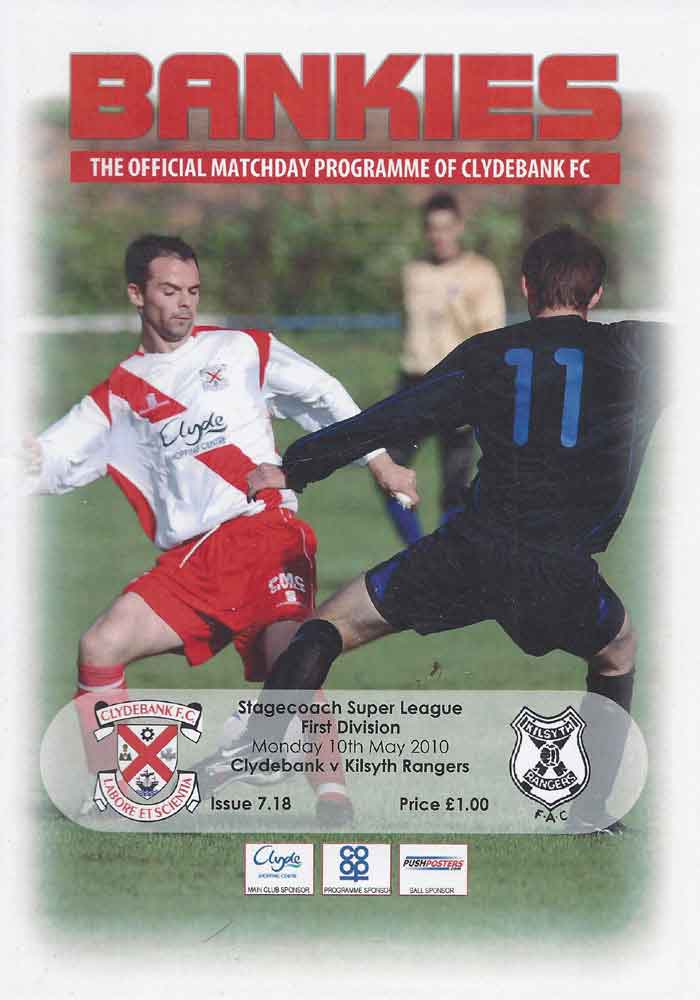 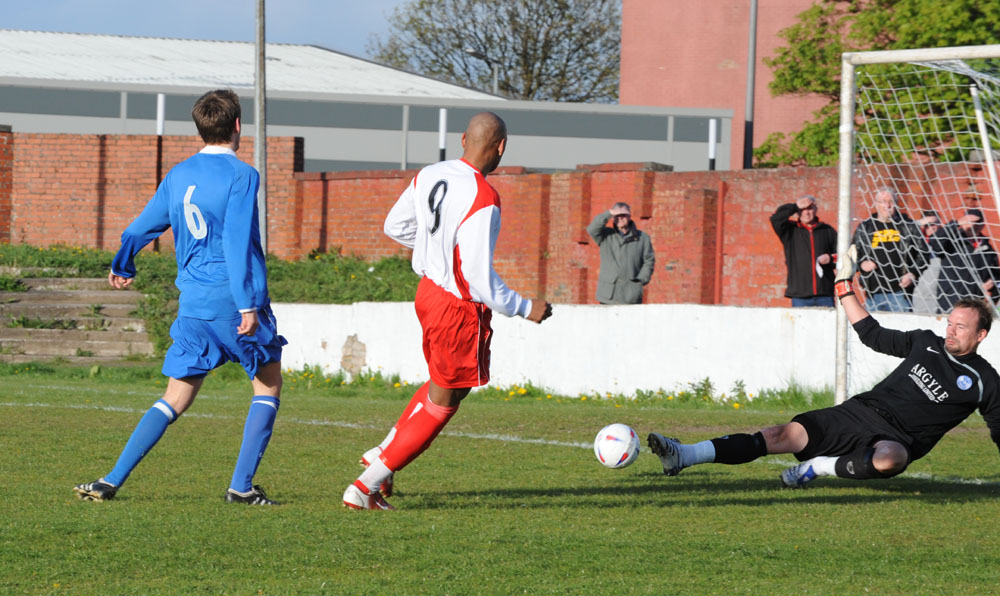 Clydebank snatched a last minute equaliser against Kilsyth Rangers tonight, and consigned their opponents to relegation to the Central District League. It was a hugely disappointing result in a match that looked like it could have been a cricket score in the early stages, but a failure to take the chances created almost saw the Bankies lose to a side who had only mustered one win and three points from their eleven away league games prior to this one.

The Bankies line up was changed significantly from Saturday’s match at Cumnock With injured Billy Jones out, and the trio of Gonet, Jack and Molloy relegated to the bench. In came Liam Campbell, Sinky Soutar, John Harvey and Paul Allum. Brian Smith also found himself switched to the left wing. Also on the bench was Mark Kilpatrick who made a huge impression in his short stint at the club in 2003-04.

With only 9 points required to more or less guarantee the Bankies third place, and the play off spot, the home side blitzed Kilsyth in the opening quarter of an hour. Mackie gave the Bankies the lead after only seven minutes when he dispossessed Murray, and charged fully 40 yards towards the Kilsyth goal before calmly putting the ball away. The Bankies should have wrapped the points up early on as two more glaring opportunities were missed. Stevie Dymock saw a header come back off the post, and then a lovely Hailstones through ball sent Smith away. He tried to poke the ball past the keeper, but being on the wrong wing cost him and the goalkeeper was able to save the ball.

The Bankies failed to capitalise on these early chances and Kilsyth dragged themselves back into the match. Martin blasted a free kick over the bar after Liam Campbell inadvisably came off his line, and fouled McAteer on the edge of the box. The keeper received a yellow card for his troubles. With ten minutes to the break the visitors did draw level. The Bankies defence stood like statues as Hodge was allowed to waltz straight into the box, and drilled the ball home. It could have been 2-1 to Kilsyth just prior to the break when McJimpsey’s deflected shot looped towards the goal, but Campbell did well to stretch back and scoop the ball clear.

Despite not being at their best, Clydebank still had great opportunities to score. With 20 minutes remaining, Stevie Dymock powered forward and sent in a rasping shot that Dukes could only parry to the side. Allum picked up the rebound and crossed into the six yard box. He picked out Mackie who bulleted a header that unfortunately was straight at Dukes. Anywhere else and it would have been a goal.

With time starting to ebb away Mackie created another chance for himself. He cut inside a defender and hit a fierce shot that seemed to take three or four deflections. Dukes was sprawled on his goal line, and the ball luckily deflected straight into his arms.

With only two minutes remaining disaster struck. Once again, the Bankies defence backed off from McJimpsey, The midfielder had all the time in the world to line up his shot, and he drove the ball into the corner of the net to give Kilsyth a relegation lifeline.

It would have been an awful outcome to go down to a side languishing at the bottom of the league with such a poor away record, and fortunately super sub Mark Kilpatrick came to the rescue. Mark had shown some neat touches after his introduction with 15 minutes remaining, and he found himself in the right place at the right time as the ball ricocheted about in the Kilsyth six yard box. He placed a header perfectly in the top corner beyond Dukes to save a point for the Bankies.

One point from six against a relegated side is not the kind of form the Bankies need to get out of this division. The players and fans alike will have to go the extra mile to secure third place. The sooner this can be achieved, the less pressure there will be.