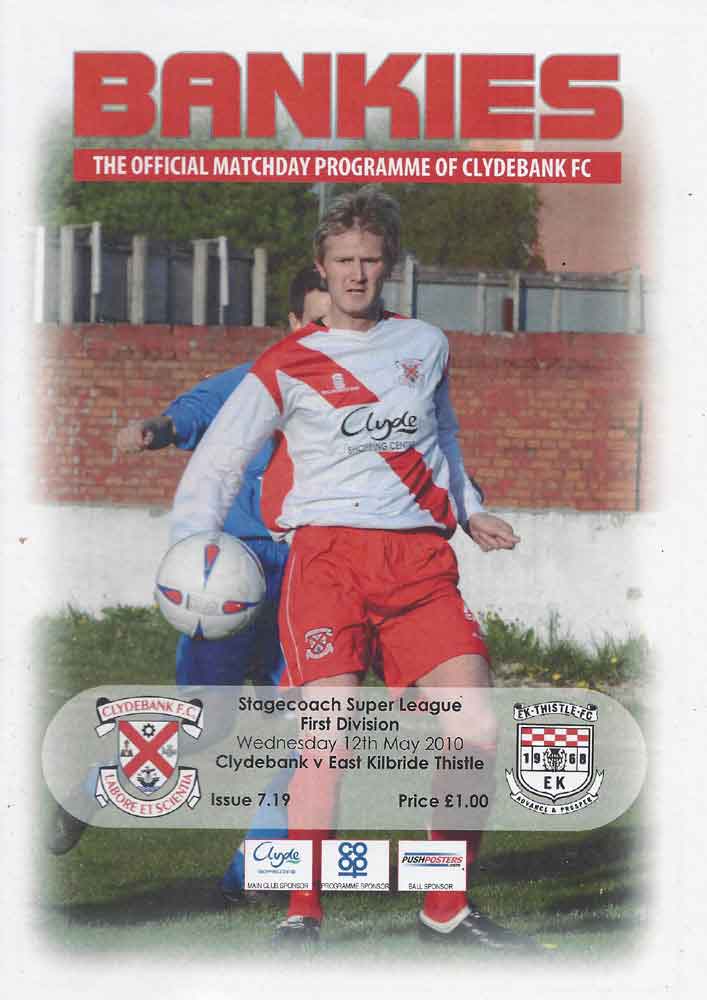 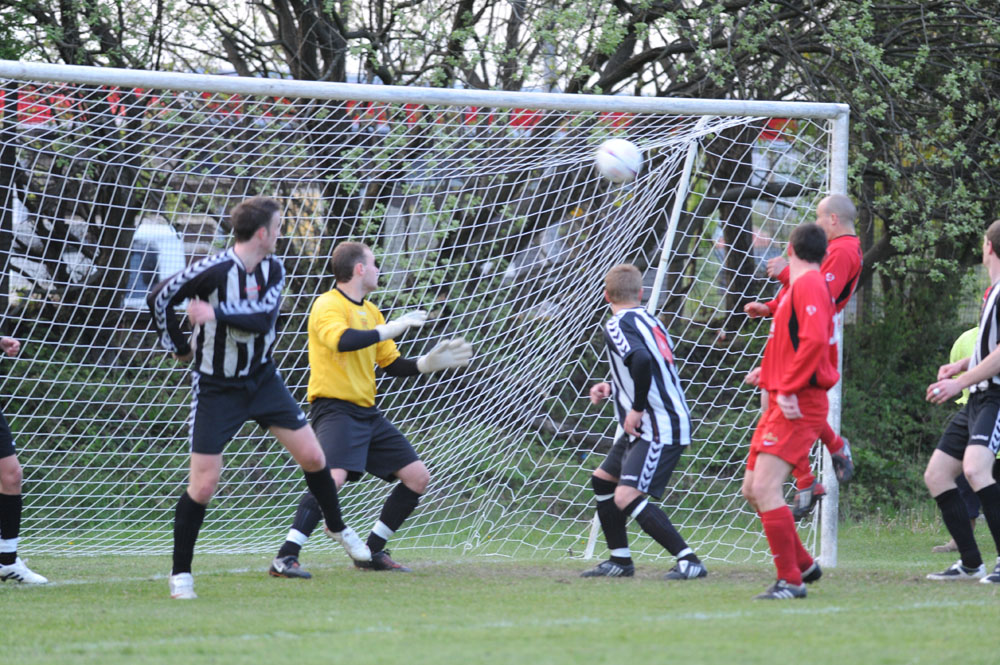 Clydebank moved another step closer to the play off position tonight with a slender 1-0 victory over a stuffy East Kilbride Thistle outfit. The Bankies left it late with Mark Kilpatrick heading home with only five minutes remaining to take the club to within a point of third placed Renfrew.

This was the Bankies tenth match in only 22 days, so Budgie McGhie made changes to the side again, in order to keep the legs in the squad as fresh as possible. Vezza, Molloy, Jack and Jones were added to the starting eleven, and super sub from the Kilsyth match, Mark Kilpatrick was on the bench again.

The first half was a dreary affair with very little to write home about. Billy Jones had the Bankies only shot on target in the first period when he skipped inside a defender, and sent in a 25 yard drive that Murdoch dealt with competently by diving to his right hand side and clutching the ball at the second attempt. Mark Hailstone tried an overhead kick after 16 minutes, but it was overly ambitious and the ball trailed wide of the goal.

East Kilbride were equally inept in the goal scoring stakes and Chaplain almost threatened with a deflected header that Gonet held without any problems. Just after half an hour Gary Lynn found himself in unfamiliar territory by racing towards the penalty box from the right wing. He let fly with a 20-yard effort, but it sailed over the bar.

The visitors created the best chance of the half just after this when a cross from the left wing found the head of Chaplain, who had stole inside Shaun Molloy, but the ball came off the “corner” of his head and went miles wide.

Brian Smith, who appeared to be struggling just before the break, was replaced by John Harvey for the start of the second period. It was the substitute who had the first effort on goal of half. After 52 minutes the ball found it’s way to the defender at the edge of the box and his weakly hit shot was pushed away by the Jags keeper who appeared to go down in instalments.

The Bankies were an improved side in the second half, and soon afterwards Ross Campbell directed a header on target that was mopped up by Murdoch. John Jack then tried one from long range that did not worry the keeper.

After 58 minutes, Billy Jones was involved in possibly the best move of the match when he worked a one-two with Mark Hailstones. The midfielder hit the return pass first time and was only inches wide of the post. Ten minutes later and Ross Campbell managed to get another header on target, but he was too far out from goal to get the power required and the keeper saved comfortably.

With time starting to run out and a goal not looking very likely McGhie introduced Dymock to the game. He almost scored immediately when John Harvey back heeled the ball to Chris Mackie. He sent in a fantastic inswinging cross that just needed a touch to put the Bankies in front. Unfortunately, Dymock either missed the ball completely or only got the slightest of touches, and the ball did not deviate from it’s flight path and just went past the upright.

The Bankies could not afford to drop points tonight, as the pressure would be starting to build, so Mark Kilpatrick was brought on as the Bankies made a last push to get the winning goal. Within a minute of coming on, Kilpatrick looked dangerous as he sent a shot just over the top. With five minutes remaining the breakthrough came. Billy Jones whipped in a near post corner, that was helped on by Shaun Molloy. The predatory Kilpatrick was in the right place as he headed the ball high into the net from only a few feet out. The striker wasn’t finished yet as he received the ball to feet in the box from Harvey. He made himself a little bit of space, and only a block from a defender prevented a possible second goal.

East Kilbride had hardly threatened at all, the whole match, and the Bankies successfully played out time. The Bankies are now unbeaten in six games, and that run includes three 1-0 wins, and the eighth time in total that victory has been achieved by that scoreline. Two tricky away ties at Girvan and Rutherglen now await, so with Whitletts continuing to threaten from behind every effort will need to be made to collect some points from these fixtures.