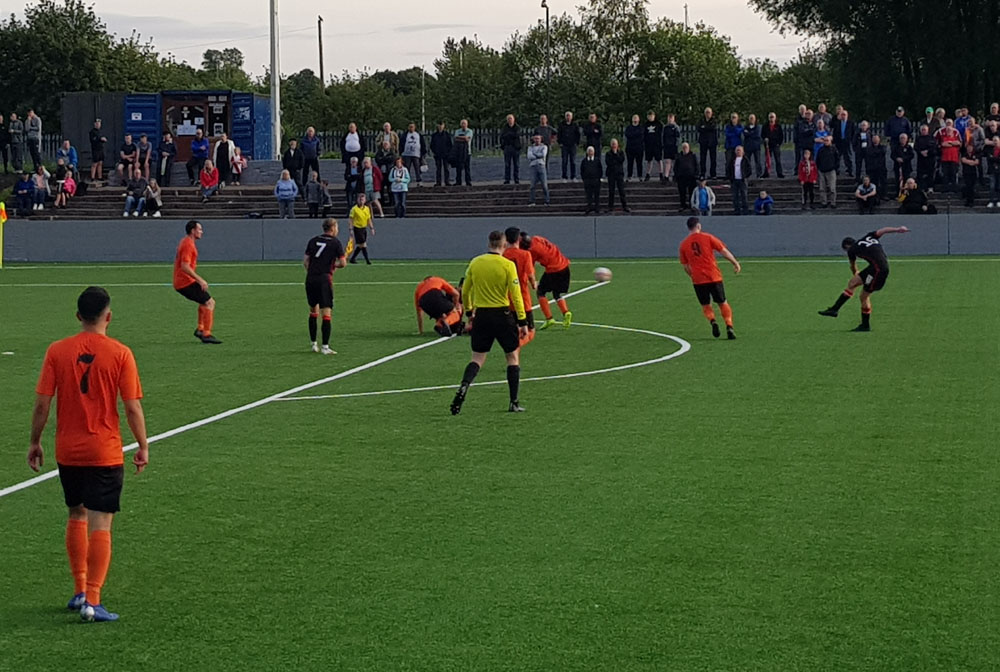 As expected, there was to be no repeat of the 8-1 thrashing the Bankies handed out to Yoker just two weeks ago in the friendly to open the new facility at Holm Park. In truth, Clydebank never reached the same heights and never looked likely to, and Yoker were a much improved outfit. In the end, the Bankies won handily scoring four times but it was a tad harsh on the Whe-ho who worked tirelessly and only had a Gregor Cree strike to show for their efforts.

The Bankies were still missing a few players due to holidays, and had two trialists in their line up whilst hat-trick hero Aaron Millar had to be content with a place on the bench. Yoker's starting eleven saw five changes from the defeat of two weeks ago.

If Clydebank had brought their shooting boots with them this game would have been over in the first twenty minutes. Before the Bankies scored after six minutes the home side could have been two up. Nicky Little was put clear on goal and oddly attempted to cross when he was in a great position to score, then Munro had McLaren scrambling across his goal to turn the winger’s shot round his left hand post.

It was Munro who opened the scoring with a cheeky as you like free kick from the right flank. With everyone expecting a cross, the 17 year old curled the ball low into the bottom corner at the near post, making goalkeeper McLaren look just a little silly as he realised too late what was happening.

The Clydebank fans in the healthy attendance were expecting the floodgates to open, and maybe had the Bankies scored the second goal then they might have done. However, some great chances were passed up. A superb cross from the right by Little was headed wide by Shelvey after 21 minutes. Just five minutes later Munro delivered a pin point corner kick onto the head of Nicky Little but he contrived to put the ball over the top when he should really have scored.

The worst miss fell to Jordan Shelvey just after half an hour when the ball was crossed to him just six yards from goal. He attempted to flick the ball first time into the net with his heel, but ended up getting the ball tangled up in his feet. He got another bite at the cherry but by this time McLaren had pounced on the danger,

Yoker took heart from not falling further behind and started to work their way into the match. Ex-Bankie Gregor Cree came closest just before the interval when he met a near post corner first time, but hooked his shot high and wide.

The Whe-ho buoyed by their finish to the half, came out with a new purpose after the break and got their reward after 55 minutes. A fast break down the wing saw Cowie left for dead, and the accurate cross to the back post was met by Gregor Cree who steered the ball home from close range.

This woke Clydebank from their slumber and they were back in front just two minutes later. Alexander who had just replaced Rowan started the move, and as the ball found Rae in the box, he cut in from the left, and curled the ball superbly beyond the keeper at the far post.

This was the start of a nightmare period for Yoker, as Baird was sent off for a second bookable offence, and before they could recover they lost a third goal. This was a fine strike by Chris black who belted the ball into the net from 25 yards after a neat lay off by Shelvey.

This really ended the match as a contest as Yoker were never going to come back with ten men and Clydebank never really stretched themselves to extend their lead. The Bankies did manage to add a little extra sheen with virtually the last kick of the ball when Barr played a crazy pass across his own penalty box that was intercepted by the alert Cammy McClair who was able to pick his spot giving McLaren no chance.

The Bankies performance was a bit of a mixed bag. Had they scored a second goal when they were well on top, then they may well have been able to coast to victory, however they were made to work for their win. When Yoker equalised things looked a little bit ropey, but fortunately The Bankies managed to get their noses in front almost immediately and never looked back after that. Clydebank face Vale of Clyde on Wednesday in a winner takes all confrontation in the league cup group after the Tin Pail took nine off of Vale of Leven. A draw will be good enough for the Bankies.