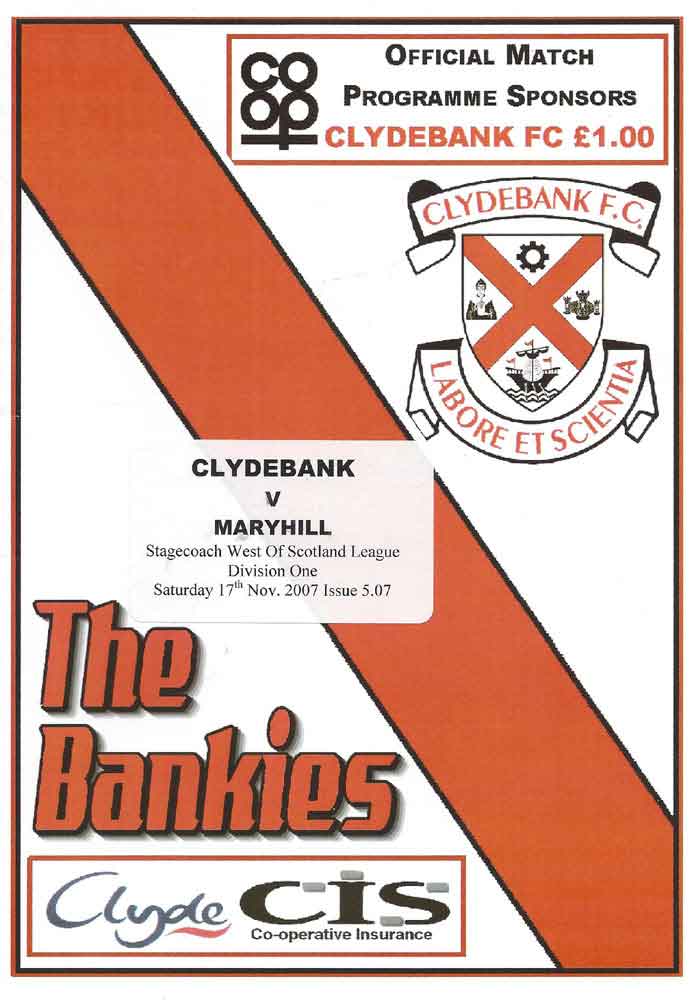 Clydebank got themselves back on the promotion trail after hitting five past Maryhill at Lochburn Park today. With Glenhead Park unavailable due to a fixture clash, and a neutral venue not being able to be found, it was an impressive result given that home advantage was conceded to Maryhill.

As has become the story of the season a number of players were unavailable including Stefan Gonet who will now have an enforced lay off after playing with an injury for the last few weeks. New signing, Barry John Corr took his place, whilst Davie Carr could only find a place on the bench after returning from suspension.

Corr, who has played senior football throughout his career was in for a baptism of fire as he was called into action straight away with a fine block from a Gordon header.

In a direct contrast to the Troon match the previous week, chances were being created freely by both sides. Lennox cursed himself as he sent a close range header over the bar from a corner kick, then Maryhill had another great chance when a volley, which was mishit, brought out a great stop from Corr

After 10 minutes Clydebank took the lead through Andy Kenna. Hailstones laid the ball off to Sichi, who threaded a superb ball though the Maryhill defence. Kenna raced forward and smartly lifted the ball over Montgomery to put the Bankies in front

Sichi tested the keeper soon afterwards, however it was Maryhill who got themselves back into the game. a corner from the right hand side was misjudged by Corr, and it found Smith who was in acres of space to head into the net.

The Bankies continued to look dangerous, and Sichi enforced this point with a dazzling run down the left wing beating three men in the process only to lose control at the last moment.

Just before the half hour, Clydebank regained the lead. James Lennox started and finished the move, passing to Paul Allum whose cross found the midfielder again, and his volley crashed off the underside of the bar and into the net.

Clydebank's defence was looking vulnerable and it was no surprise when Maryhill drew level again with a quite stunning strike, only minutes later. There appeared to be no immediate danger as Connelly picked up the ball 25 yards out, however his diagonal shot was unstoppable and left Corr rooted to the spot as the ball crashed into the top corner.

It was end to end stuff and both defences were at sixes and sevens as chances continued to flow. Sichi missed with a header from only a few yards out, then Docherty was caught ball watching as Smith snuck in behind him to chest down the ball and fire a goalbound shot. however, Corr made up for his earlier error with a great save.

It should have been 3-2 to the Bankies just on half time as Mark Hailstones passed up a great chance. The ball bounced upwards to him only a few yards, but he could only direct his header over the bar when it looked easier to score.

Budgie McGhie evidently not happy with the slackness in the first period made two half time changes with Carr and Soutar replacing Hailstones and Docherty.

However, it was Maryhill who made the early running with Slack coming close with a curling effort, then the ball came off the bar from a corner kick.

The turning point came in the 58th minute when the Bankies were reduced to ten men after Lennox was given a straight red card. Whilst jostling in the box he was adjudged to have used an elbow. This decision came as a surprise to everyone, not least to the Bankies midfielder who was incensed as he left the field.

The sending off only seemed to galvanise the Clydebank players and they assumed control of the match with a revitalised determination.

A penalty claim was turned down after a challenge on Andy Kenna in the box, then Allum sent in a dangerous cross but there were no takers. McInnes sliced a shot over before the Bankies finally went ahead for the third time.

A poor clearance in the Maryhill defence was charged down by Bowie. The tiring forward didn't have the legs to get beyond the Hill backline, but cleverly played the ball to the side where Davie Carr was on hand to slide the ball under Montgomery and into the net.

Ged Hoey replaced Mark Bowie and he was to make his leave his mark on the game only minutes later. A winding run that seemed to be going nowhere, turned into a great pass to Sichi who cut inside and fired in a shot that deflected off a defender. Hoey continued his run, picked up the loose ball, calmly sidestepped the keeper and rolled the ball over the line to make it 4-2.

Any chance of Maryhill making a fight of it disappeared after Elliot was given a second yellow for protesting too vehemently for offside.

IT was too easy for the Bankies now as they made repeated attacks on the Hill goal. Cunningham came close with a sliding effort from a Lappin corner, then Montgomery saved smartly at the feet of Sichi after great wing play from Carr. Kenna followed this up with a shot that flew wildly over the Barr.

A fifth goal did come before the end in controversial circumstances. A Maryhill player hurt himself trying to make a challenge, however the ref did not seem too perturbed, so Lappin played on regardless. The move of the game followed as Lappin played the ball inside to Hoey who sent Allum free on the right wing. His low cross was met at the near post by Davie Carr who rammed the ball home to complete the scoring.

This was a great victory in the end after last week's disappointment at Troon. It was important to bounce back straight away and the players showed great character after going down to ten men, especially with home advantage conceded to Maryhill. Next week, the Bankies travel to struggling Renfrew who sit in one of the relegation positions at the moment. Form has not been great against the bottom markers in the division, so it is vital that there is no complacency, and we stay in touch with the leading pack.