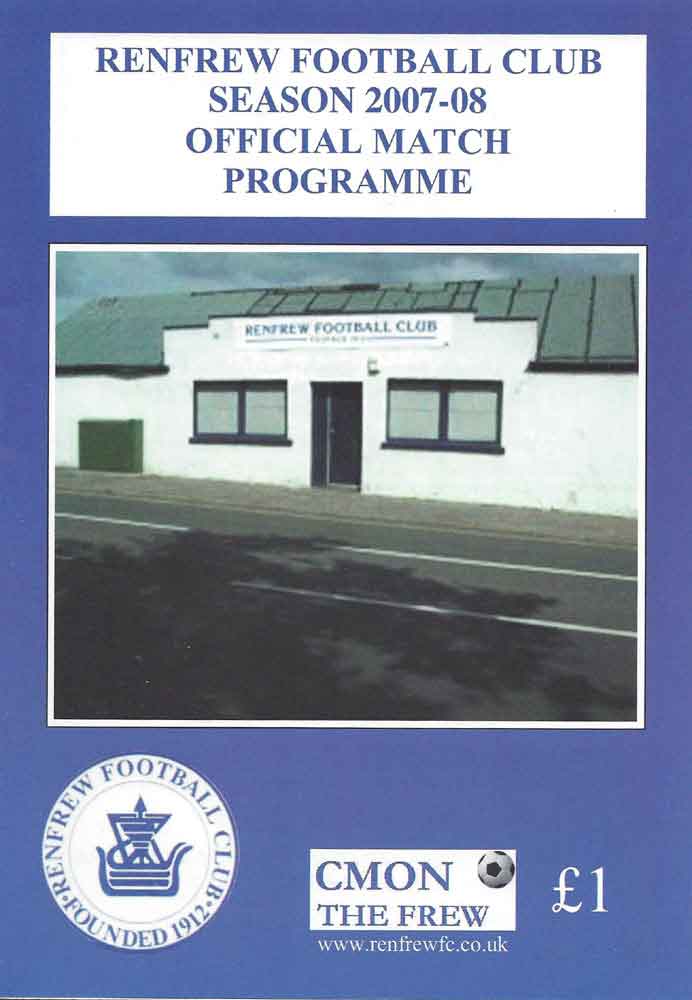 Clydebank fans expecting three points at struggling Renfrew today were to be sorely disappointed as the players turned in a truly woeful performance resulting in the Bankies worst scoreline since returning to the Juniors.

Budgie McGhie had major selection worries coming into this tie, with a number of players missing through a combination of injury, suspension and work commitments. However, a relatively strong eleven were able to take to the field to start the match.

In a day reminiscent to Troon a few weeks ago, the elements dictated the style of play required, and the opening spell of the match was also similar with little in the way of opportunities created by either side.

Faulds had the first chance of the match with a snapshot that Corr held with ease. Down at the other end, Sichi was making some menacing runs down the left flank, however there was no end product to his play.

It took until 22 minutes until the Bankies forced Marshall in the Renfrew goal into a save. It came from a free kick that Davie Carr curled around the wall, however the keeper read it all the way and saved.

On the half hour, Renfrew had a decent chance, when a Gordon free kick to the back post was powered over the top by Rankin.

Renfrew, with the strong wind at their backs, had been the better side, however the Bankies took the lead against the run of play after 31 minutes. Ged Hoey won a free kick on the right hand side, which Gordon Lappin flighted over. Martin McInnes, who was unmarked, rose majestically to fire an unstoppable header into the net to put the Bankies in front.

Any hopes that the Bankies would settle after taking the lead were soon dashed as Renfrew scored two goals in quick succession. Poor marking allowed Crowhurst acres of space on the right wing. He had all the time in the world to pick out Faulds who side footed the ball beyond Corr.

Two minutes later, and lessons weren't learned when a ball over the top caught out the Bankies rearguard. Miller, again with plenty of time and space rifled the ball past the exposed Corr.

Clydebank had lost the midfield battle in the first period, and as the match restarted it was evident that Budgie McGhie had asked the side to up the tempo with Renfrew put under immediate pressure.

Within a minute, a Lappin free kick led to Ged Hoey firing a shot over the top. Hoey, again, found himself in a shooting position, but his shot was charged down.

After 51 minutes, the Bankies put together a fine flowing move ending with Ged Hoey taking a pop at goal from an acute angle. however, his shot was weak and Marshall smothered the ball.

As Clydebank were enjoying their best spell of pressure of the match, Renfrew broke away to score a third. Arguably, this was the turning point of the match as Crowhurst appeared to be several yards offside. He bore down on goal and laid the ball off to Faulds, who slid the ball into the goal to give Renfrew a two goal cushion.

Almost from kick off, Kenna had a long range effort held by Marshall, however any remaining spirit left in the side seemed to evapaorate. On the Hour Hoey and Hailstones were replaced by Friel and Sutherland to try and add some fight in the middle of the park.

Briefly, Clydebank did raise their game when Lappin headed wide from an Allum cross, then Davie Carr had a great turn and shot saved well by the Renfrew keeper.

However, things went from bad to worse as the centre of the Bankies defence was breached again. Sutherland, who was playing right back tried to get back, but only succeeded in downing the goalbound Renfrew striker on the edge of the box.

Sutherland was sent off for his troubles and worse was to follow, as Miller crashed in the fourth goal, after Corr saved the initial free kick from Cochrane

With twenty minutes still remaining a real pasting looked on the cards,and was duly delivered as two more goals were added before the end. Crowhurst added number five after a mishit shot fell kindly to him, and in injury time substitute, McKenzie grabbed number six with the bankies defence posted missing.

An utterly forgettable match, with no positives to be taken at all. The defence have been struggling recently, however no one could have envisaged an outcome like today. Next week's cup match is a much needed diversion from the league with hopefully missing players like Jack, Fisher, Lennox, Bowie and Craig back in the fold soon.