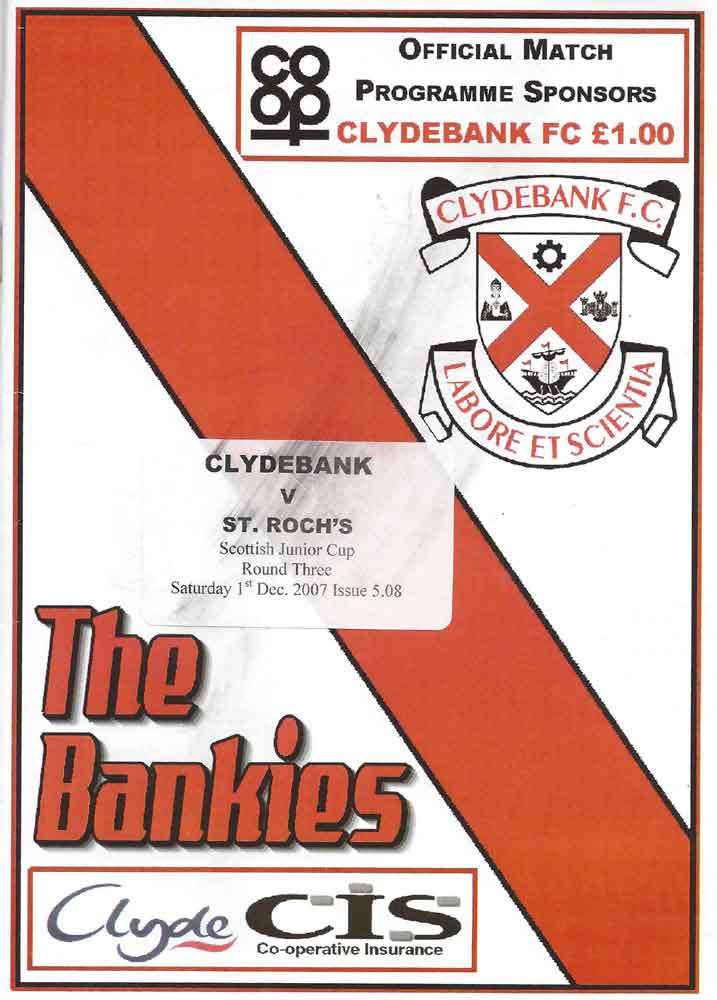 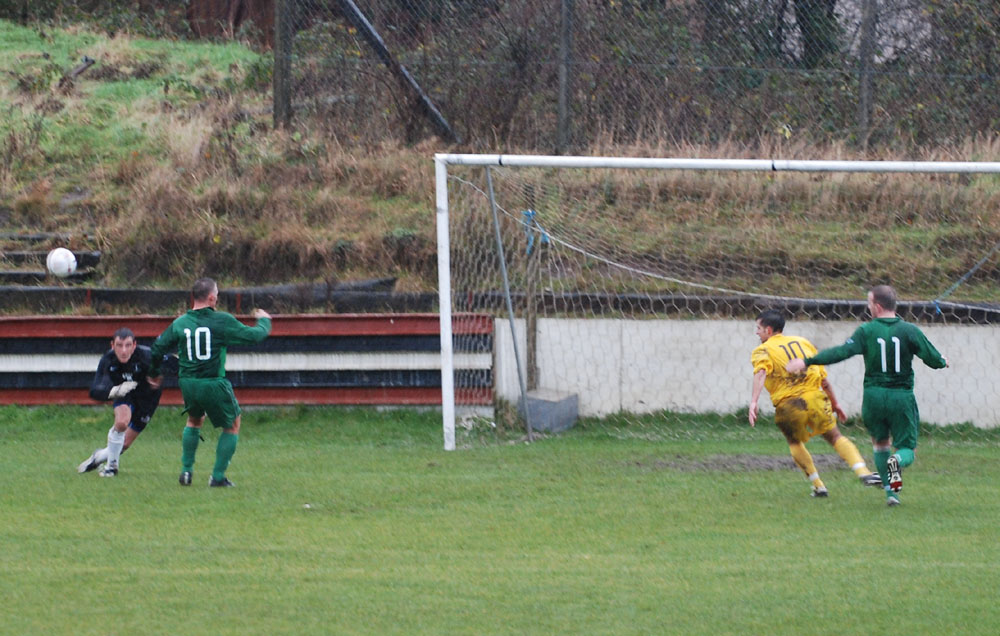 The Bankies took another step towards Scottish Cup glory with a convincing scoreline against a battling St Rochs side from the District League, in a truly horrendous day for football.

The players of both sides deserve great credit for turning in an entertaining match against driving sleet and Arctic style temperatures. Two new signings in the shape of Jerry Packham and Brian Miller took their bow in front of the few hundred or so hardy souls under the Glenhead cover.

Kicking against the horizontal rain, Clydebank made a dream start by scoring after only three minutes.Andy Kenna burst through from midfield, and the ball found it's way to Mark Bowie. The striker's turn seem to deceive the whole of the St Rochs defence, and he had time to steady himself before despatching the ball into the net.

Only a minute later, Bowie turned provider for Davie Carr, who smacked the ball high into the side netting after side stepping his marker.

The pressure continued as Hailstones cross was glanced wide by Cunningham. St Rochs, who had a player injured in the warm up, seemed to wake up when substitute Roger sent in a cross that went dangerously wide.

The match began to settle down, however the Bankies were creating all the chances. Jack and Kenna combined to set up Carr, but his shot was hit straight at Johnston in the St Rochs goal. After quarter of an hour Paul Allum had time and space to send in a shot, but he unfortunately dragged the ball wide.

A second goal was inevitable, and it came courtesy of fantastic play from the impressive debutant Miller. The midfielder weaved his way past three defenders, before sliding the ball across the six yard box to Hailstones who slotted home.

Miller, again, won the ball through sheer perserverance to set up Carr, but his shot from the edge of the box just slid past the keeper's right hand post.

The game could have been done and dusted within the first half hour, but the Candy Rock started to battle their way back into the match as the killer third goal was elusive. Docherty blew a half chance for the visitors, before a long range shot flew over Corr's bar.


At the other end Bowie had a shot deflected over the top. The resulting corner from Jack was met by John Cunningham, but his header was cleared off the line.

Just before the break, St Rochs were rewarded for their tenacious play. A long Diagonal cross, similar to an earlier opportunity, was met perfectly by Quinn who fired the ball high into the goal giving Corr no chance.

The opening period of the second half saw St Rochs give the Bankies a hard time of it and dominating possession, but funnily enough it was the Bankies who were the more threatening side.

Determined play from Kenna paved the way for Carr to have a shot at goal, but his shot was straight at Johnston. Bowie then sprung the offside trap, but his angled drive went wide.

St Rochs had a long range speculative drive go over the top, and down at the other end Carr created an opportunity for himself two minutes later skipping inside from the left wing and shooting over.

This was Carr's last involvement in the match as he was substituted after 54 minutes. Joining him was Miller who failed to recover from a reckless challenge in the first half. Lappin and Sutherland entered the fray as gaffer, McGhie tried to give the side a shake.

It took a while for the subsitutions to take effect, but slowly the Bankies began to regain the initative. After 64 minutes, a fantastic run and cross down the left wing was met by Andy Kenna whose shot brought out a fine finger tip save from Johnston.

After 72 minutes, the match was sealed when a corner played in low from the right was helped on to the back post where Hailstones poked the ball home from close range for his fifth goal of the season.

Hailstones, who was now enjoying himself in the rain set up number four for Bowie by delivering the perfect cross to the back stick for the striker to dive in and power the ball past the helpless Johnston.

Corr had one last save to make in the final minutes of the match, before the ref ended the match bang on time to let everyone get home before hypothermia set in.

A vast improvement on the previous match, albeit against lower league opposition. However, the match was still to be won in treacherous conditions. The new signings deserve special mention, as both look to be exciting additions to the squad, and with another decent run in the cup to look forward to in the coming weeks, it is now time to turn the attention to getting the league campaign back on the rails.