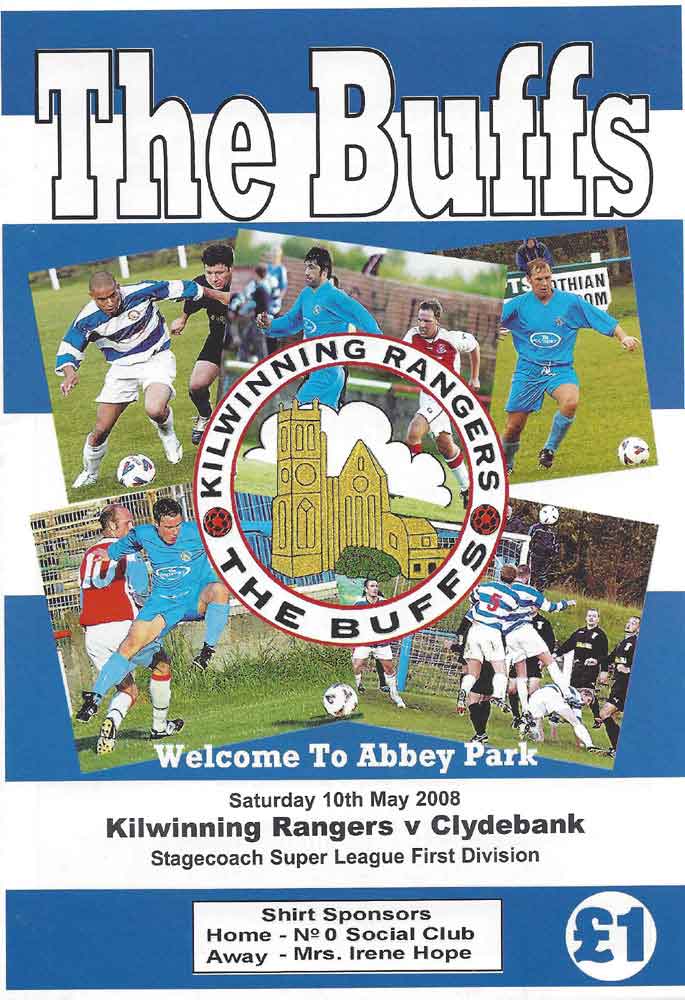 Clydebank finally broke their cursed run without a victory at sun-drenched Abbey Park. With Kilwinning Rangers needing three points to ensure promotion, the Bankies defied the odds to hammer four goals past the Buffs and raise hopes that Super League football will be played at Glenhead Park next season.

Mark Hailstones turned in a great performance bagging a brace, but Alan Jack stole the show with a hand in all four goals. It could have been very different, however, as Kilwinning dominated the first twenty minutes of the match.

The Buffs attacked the Bankies goal from the off, and a stinging McCulloch volley was turned onto the post by Corr after only nine minutes. In the opening twenty minutes Smith, Moore and Mason all had attempts on the Bankies goal.

With Allum playing in a more advanced role, the Bankies began to turn the tide and could have been given a penalty after half an hour. Allum played a great pass into the box that resulted in a four man pile up, but the ref judged that the ball was played first, and awarded a corner

From the corner McInnes had a free header at the back post, but headed the ball into the ground and the ball spun over the bar

With the Bankies starting to gain the upper hand, disaster struck. Tyler got on the end of a back post cross and headed against the upright. He neatly collected the rebound, and his cross ball was diverted by McInnes into the net, wrong footing Corr in the process.

This stunned the Bankies, and it could have been two, only minutes later as McCulloch crashed a free kick off the outside of the post to make it a hat-trick of shots hitting the goal frame.

As the half drew to a close, Clydebank regained their composure with Paul Allum cracking a shot over the bar.

Although not troubling the Buffs goal greatly in the first period, the Bankies looked more cohesive going forward than they had in many a week, and it finally clicked into place in the second period.

The warning signs were there for the Buffs when Jack played a great ball into Miller's feet within 15 seconds of the restart, but unfortunately he miscontrolled the ball and the chance was gone.

However, within 3 minutes it was all square. Alan Jack delivered a fantastic near post free kick, that Hailstones buried with his head via the upright.

As Miller made way for Kenna on 57 minutes, the Bankies took the game by the scruff of the neck, as Alan Jack fizzed a shot just past Ross' left hand post.

A minute later and the Bankies were in the lead. That man Jack again, struck the post with a trademark free kick, and Mark Hailstones was there to pick up the rebound and slam it home from close range.

Almost immediately, Kilwinning thought they had equalised when Moore headed high into the net from a corner, however their joy was short lived as the ref saw a push on Corr.

Spurred on from this piece of fortune, the Bankies started making chance after chance. Hailstones curled a shot to the far post, that forced Mullin to clear. Martin McInnes picked up the loose ball and rifled a shot over the bar. With 64 minutes on the clock Hailstones crashed a header off the cross bar denying him a hat trick.

It was no surprise when the visitors added a third. Alan Jack spun superbly on the ball and raced into the buffs half.Andy Kenna took over and despite the attention of two Kilwinning defenders, he calmly placed the ball wide of Ross and into the net.

With the Bankies heading for their first victory since February, Paul Allum added a fourth. Alan Jack - who else - supplied the pass, and Allum raced clear off the Kilwinning defence to fire high into the net beyond the desparing dive of Ross

In the dying minutes Kilwinning could have pulled a goal back as the Bankies tired in the heat. However Tyler and Reid were not able to make the most of their chances.

This was not only a great result for the Bankies, but a great performance. The whole team played their part in a game they probably weren't expected to win. The crunch games are now next on the agenda, and the players know the level expected of them if they are to gather the necessary points to ensure survival.