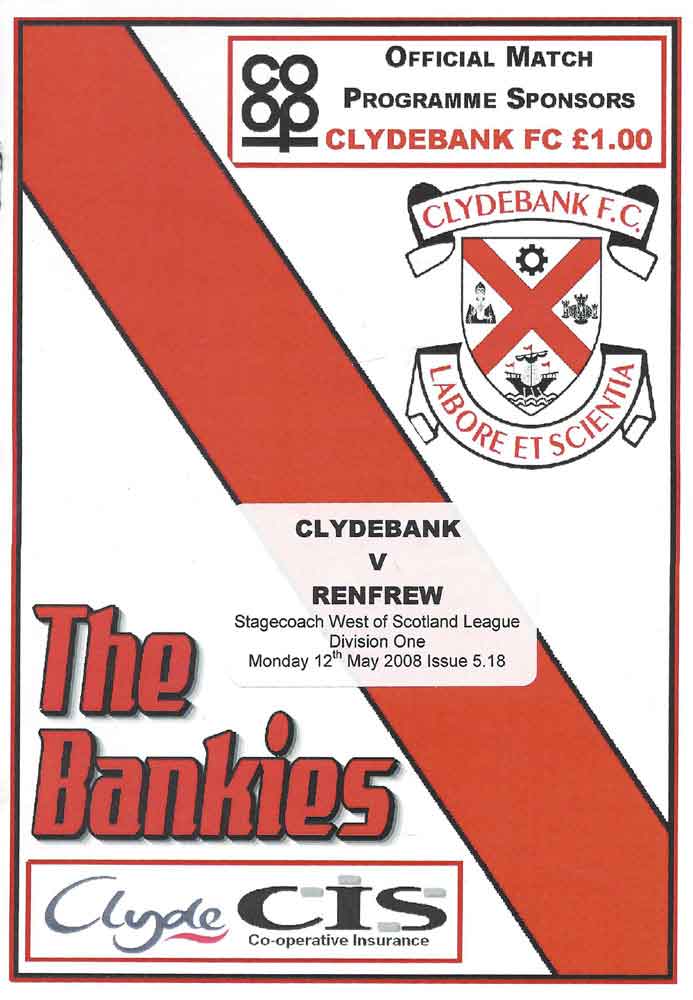 Clydebank defeated Renfrew at Glenhead Park to make it two wins in a row; earned a first league clean sheet of the season, and climbed out of the relegation zone to boot. Budgie McGhie could not have asked for a better response from his players as he battles to ensure Super League football next season.

A subtle change in formation, by drawing an extra man into midfield has given the Bankies real width again. Hailstones and Allum have both been given a new lease of life, as both caused Renfrew problems all night.

Right from the off, when Hailstones delivered a fantastic cross that Proctor was unlucky to have cleared off the line, it looked like the Bankies were in the mood to take all three points.

Renfrew are just about safe from relegation after a great second half to the season. The turning point in their season arguably, was the 6-1 defeat they inflicted on the Bankies in November.

Clydebank keen to avenge this defeat, came close as a smart corner kick was rolled to the edge of the box where Alan Jack's shot was blocked by a ruck of players in the six yard box.

Alan Jack and Peter Jordan both had long range efforts go wide, as did Miller for the visitors, before the Bankies took the lead on the half hour.

A deep cross into the box sailed beyond everyone, however Paul Allum chased the ball out to the touch line, where he turned and zipped an early cross to the near post.Brian Miller got ahead of the Frew defence and he glanced the ball into the net beyond Marshall.

Renfrew tried to hit back straight away. McAlpine tested Corr with a free kick, which the Bankies stopper did well to hold after an awkward bounce on the firey pitch.

The Bankies maintained their lead going into the break, but not without a couple of heartstopping moments. Most notably, when Corr flapped at a cross, which needed Cunningham to thump the ball away as it rolled across the face of goal

Renfrew began the second half strongly with Gallagher curling a right foot shot wide of the post, however the Bankies should have killed the match after 52 minutes

Clydebank began to take control of the game again, and alan Jack chased a lost cause into the corner. He managed to cross the ball to the back post where Proctor should have done better than direct his header wide.

Minutes later, Alan Jack sent in a blistering drive that Marshall did well to hold. Then after an hour Miller turned beautifully on the ball deceiving a defender. Unfortunately his shot didn't match his earlier skill and the ball went over the top.

Both sides made a number of changes, but neither side was able to carve out a decent opening in the last quarter of the match. Both sides were restricted to long range efforts and the Bankies ran out comfortable winners with a clean sheet under their belt for the first time since August.

Two vital wins in a row have given the Bankies every chance of avoiding the dreaded drop. It is very much in our own hands, and even with Alan Jack hobbling off injured at the very end of the match, fans will be hoping there is enough in the locker to see the club to safety.