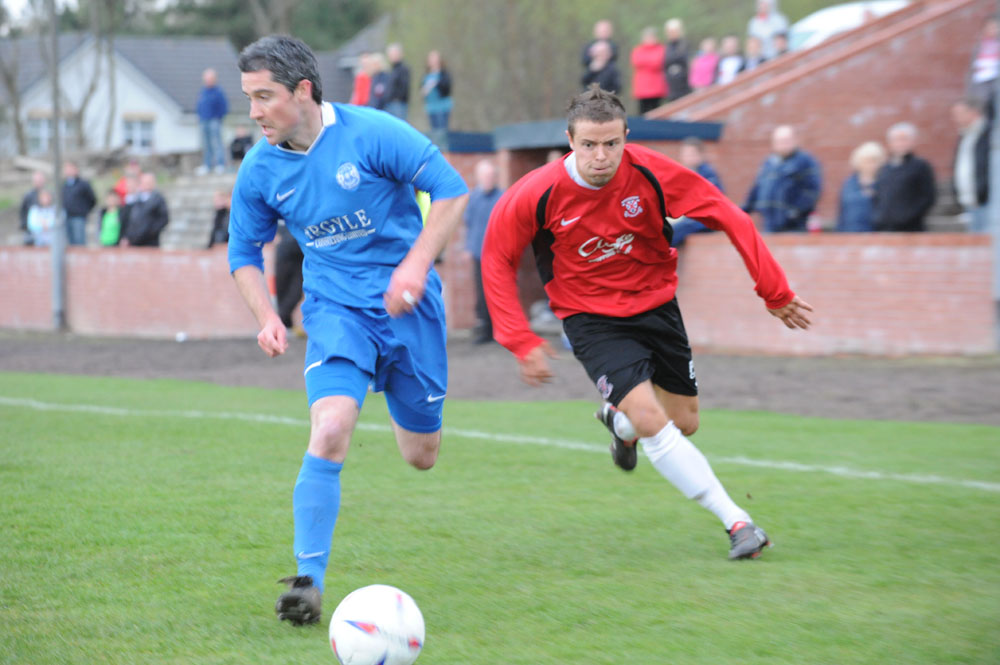 Clydebank's woes continued after they suffered their second defeat in three days, this time at the hands of relegation threatened Kilsyth Rangers. Automatic promotion now looks like an extremely remote possibility after the top two - Cumnock and Rutherglen - both won. It was a poor performance as the Bankies passively allowed Kilsyth to score three times without reply. It could have been very different if first half chances had been taken.

Budgie McGhie seems determined to use the squad to it's fullest extent as he made five changes from Monday's game against Rutherglen with Molloy, Vezza, Marshall, Jones and Hailstones all in the starting line up.

Kilsyth seemed quite apprehensive during the opening exchanges as they allowed Clydebank a lot of possession, and it was almost to their cost. Dymock's weak header at goal after four minutes was followed up by superb a Martin McInnes volley from the edge of the box that went just inches past the goalkeeper's right hand post. Minutes later, and Hailstones laid the ball off to Cairney, but his shot was off target.

Kilsyth's first sight of goal came after 12 minutes when Doyle blasted a free kick well over the bar. The play quickly returned down the other end of the pitch where Dymock set up Marshall whose well struck shot was awkwardly parried over the bar by Dukes. From the resulting corner kick Dymock rifled a shot well over the top.

The home side then sent out a warning of things to come with a fast break. Kelly cut in from the right wing and forced Gonet to turn his shot around the post. This was blip as Clydebank continued to search for the opener. Marshall and Jones both shot over the bar from distance, before the best chance of the match arrived at the midway point of the half.

Hailstones cut the Kilsyth defence open with a superb through ball. Cairney had a clean run through on the goalkeeper, but he never looked comfortable as he looked up twice for someone to square the ball to. In the end up he was closed down by Dukes, and his shot was too late and too straight and the ball was turned away for a corner.

This miss was costly as the Gers took the lead after 34 minutes. A free kick was flighted in from the right hand side. Marshall was badly guilty of allowing his man to get away from him, and although the forward did not connect with the ball properly it scooped up perfectly for Boyle to nod in from only a couple of feet out.

The Bankies needed a quick response and nearly got it when McInnes got on the end of a near post corner kick from the left hand side, but he just didn't get enough on his glancing header and it drifted wide of the post.

Having weathered the storm in the first half, Kilsyth began the second half with renewed belief. Up a goal and in need of a win the chased down every ball, and took control as the match progressed A header off the cross bar almost doubled the lead, as the Clydebank support were becoming restless and demanding a change. This finally happened after 62 minutes as Mackie and Smith entered the fray, but it wasn't long before Kilsyth added to their lead. Substitute McPeake got on the end of a near post cross and guided the ball into the net.

Smith was attempting to make some runs down the channels, and one of these saw the midfield man poke the ball through the Kilsyth defence to Mackie, but the striker drove the ball against the body of Dukes as he spread himself to block the shot.

This was the only decent opportunity created in the second period as by and large the Bankies offered up little resistance. The manner in which the players were succumbing was alarming as McAteer twice had glorious opportunities to stretch the home sides lead.

It wasn't long before the third goal arrived. It was a disaster for the defence as Gonet ran out of his box to clear the ball, and only succeeded in hit it off of Molloy. The ball spun back into the box where Dalrymple had the simple task of stroking the ball into the empty net. Kilsyth could have added to their tally in the closing minutes as the Bankes heads were well and truly down, and it was a relief for the travelling to hear the final whistle.

Despite these two poor results, the Bankies are still positioned to challenge for the third place play off slot. Victory at Annbank on Saturday is now a must win game, and the match up with current third place incumbents Renfrew next Wednesday could be a make or break game for the club's season