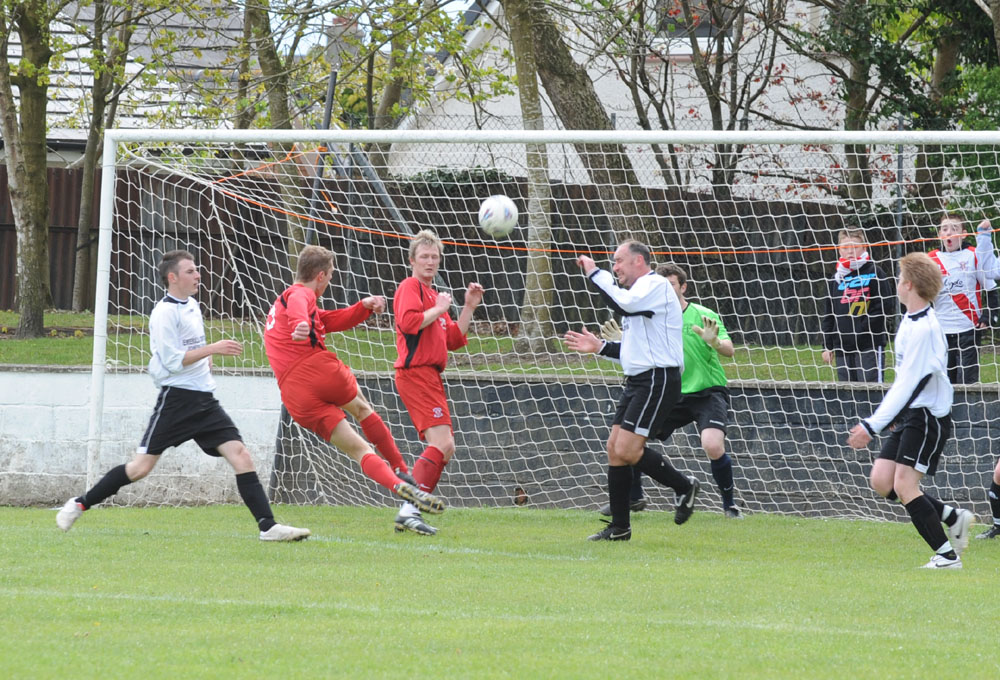 After, two defeats in a row, Clydebank returned to winning ways with a fine 3-2 victory over Annbank United at New Pebble Park. Although, the Bankies were made to sweat a little in the closing stages of the match the score could have been much more emphatic for the visitors.

With a number of players unavailable for a variety of reasons, the Bankies were forced into several changes with Harvey, and Smith returning to the starting line up. Young goalkeeper, Liam Campbell, was also preferred in front of Stefan Gonet who had to settle for a place on the bench.

It was Campbell who provided the first talking point of the match when the youngster gifted Annbank the lead after seven minutes. As he bent down to pick up the ball, Campbell allowed the ball to slip from his grasp and through his legs, where a grateful Wilson was on hand to tap the ball into the empty net.

After the disappointing response to going behind in midweek at Kilsyth, the players were determined not to let this set back get them down, and within 5 minutes they were level. The Bankies had been doing most of the pressing prior to losing the opener, and when they were awarded a corner after 12 minutes the awaited goal came. John Harvey whipped in a vicious inswinging cross ball that skimmed off Martin McInnes on it's way into the net from the flag kick.

Three minutes later and the game was turned on it’s head. Campbell sent in a long throw into the box, which was headed clear to the edge of the box where Hailstones was waiting, and he thrashed the ball into the top corner with a first time shot.

The Bankies tails were now up and they went searching for the killer third goal. A deft cross into the box saw an Annbank defender clearly handle the ball, but as the ball broke to Dymock in a goalscoring position the ref allowed play to continue. Unfortunately, Dymock’s shot was well saved by the keeper. Jones pounced on the rebound but a defender did well to deflect the ball for a corner.

Dymock should have extended the lead with that miss, but the next opportunity was even worse. Billy Jones sent in a corner kick to the back post where Ross Campbell rose superbly to nod the ball back across the goalmouth. Martin McInnes was perfectly placed, but somehow managed to shoot over the bar from 8 yards with the whole goal at his mercy.

As the half came to a close, the Bankies squandered three more chances. Cairney helped on a McInnes through ball, but Dymock was stretching as he turned his shot over the bar. Then Lynn pushed a free kick out wide to Campbell. The Bankies defender pitched in a teasing cross, but Jones was the offender this time as he headed over from close range. Finally, Smith left a series of defenders in his wake as he hit the bye line on the left had side. He fizzed in a cross that Dymock missed by a whisker.


As the second half began, the wind picked up at the same time in Annbank’s favour. This would influence how much of the general play would be. After a series of let offs in the first period, the home side set out to retrieve the deficit. They had the Bankies under a reasonable amount of pressure, and it is ironic that Clydebank couldn’t score when they had all the play, but did so when they were under the cosh themselves.

Dymock was the provider as he split the Annbank defence with a through ball. Brian Smith’s pace quickly gave him a clear run in on goal where he rounded the keeper and crashed the ball high into the net. This cushion allowed the Bankies to absorb Annbank’s pressure and hit on the break, and they should have been further ahead on 61 minutes. Dymock was sent through one on one with the goalkeeper, but in the classic “having too much time to think about it” scenario he took too long and the goalkeeper was able to close him down

The Bankies continued to look dangerous on the break, but Annbank were not to be discounted. A near post free kick after 78 minutes caught the Bankies defence sleeping, and Wilson should have burst the net with his close range volley, but he contrived to thump it over the bar. A minute later and the Bankies missed yet another opportunity. Hailstones showed great vision, by sending Dymock free on the right wing. He sent in a stinging near post cross, which Cairney threw himself at bravely, but his header went just wide.

The Bankies should have been four or five goals up, but suddenly found their lead cut to one. A neat cut back found McCann in the box and he drilled the ball into the corner of the net from 16 yards. This gave the Bankies support a few nervous moments in the closing stages, especially when Baird headed a Wilson cross towards goal. Liam Campbell redeemed himself by tipping the ball over the bar.

Clydebank could still have scored another goal when the umpteenth one on one with the goalkeeper was created. Dymock again timed his pass perfectly to send McInnes clear. As he bore down on the goalkeeper he chose to turn back instead of trying to finish the job himself. He laid the ball off to Jones at the edge of the box. The midfielder shot, perhaps a little too quickly, and the ball cleared the bar by around a foot.

As the ref signalled the end of the match, the scoreline did not reflect the amount of chances made, however the three points were the first priority. With third placed Renfrew losing again, the match between the two sides on Wednesday will be as important as any the Bankies have played.