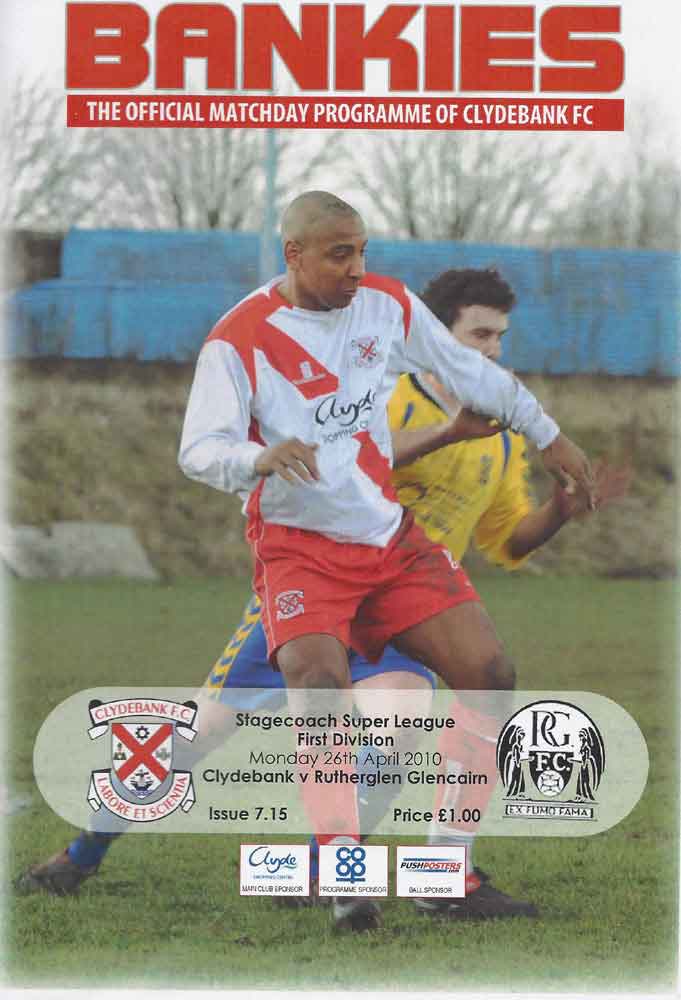 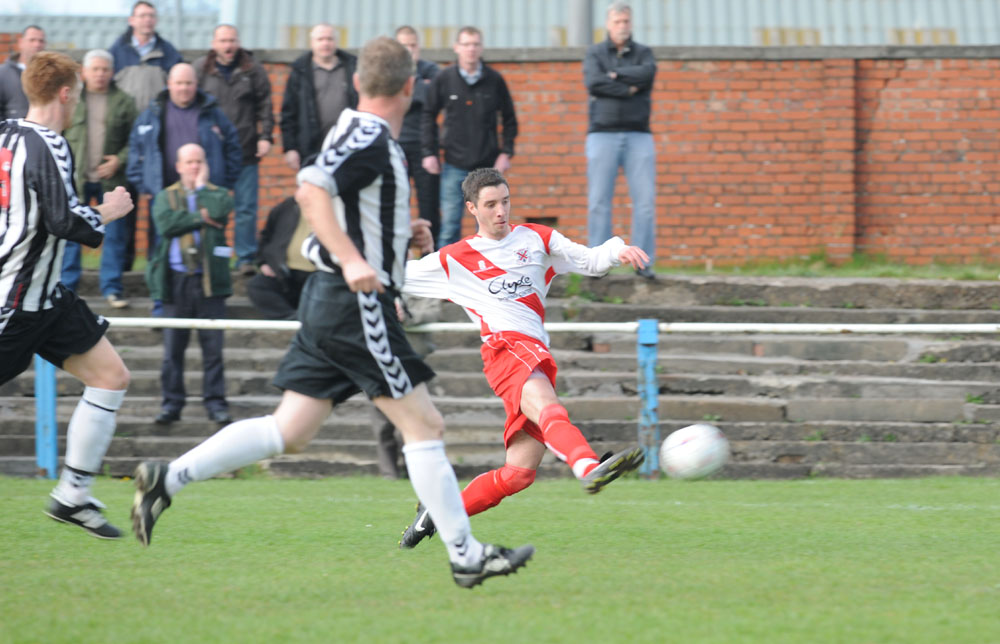 Clydebank and Rutherglen Glencairn fought out a seven-goal thriller at Holm Park with the Glens taking all three points by the odd goal. The Bankies who harshly played most of the second half with only nine men made a magnificent effort, but the visitor’s superior numbers told in the end.

The Bankies returned to more familiar lines for this promotion encounter with Dymock, Harvey, Jack and Smith all in the starting line up. However, one thing that didn't seem familiar for the first ten minutes of this match was the ball, as the Bankies hardly had a kick. Rutherglen who have been on a poor run recently were fired up and started at a lightning pace. Three corners in as many minutes, with the last one resulting in a header that clipped the top of the bar sent out an early warning. Paul Allum deservedly received a booking in this early stage that was to cost him dear later.

After fifteen minutes, the pace settled down and the Bankies began to come into the match. A McInnes header that went a foot over the bar from a Lynn free kick showed this. Moments later a sweeping glens move saw McDougall rifle in a wicked cross that O'Keane volleyed first time just past the post.

The match had a cup tie feel about it, and a goal was coming. After 27 minutes, John Jack sent a ball through to Nikky Cairney that should have been cut out, but the Bankies midfielder took the ball in his stride and crashed it past Black to give the Bankies the lead. Clydebank buoyed by the goal, took the game by the scruff of the neck.

With a half an hour on the clock, Allum released Mackie down the wing and he cut the ball back along the six yard box, but Cairney couldn't direct his shot goalward after good pressure from the Glens defence. Moments later, Chris Mackie curled a shot in the box, but again a defender stopped the ball, this time with his stomach. As the Bankies stepped up the pressure Smith headed the ball against the cross bar, but was adjudged to have been offside anyway.

Just as the Bankies were gaining the upper hand, they allowed the Glens to get back in the game by giving away a silly penalty. John Jack attempted to shepherd the ball out of play, but allowed a Glens attacker to nip in front of him. It's not certain that he had a clear run in on goal, but Jack Stupidly pulled him back. O'Keane stepped up and made no mistake from the spot.

Things went from bad to worse only three minutes later when a speculative cross ball was missed by everyone, but hit off john Harvey's thigh and went into the net at the far post beyond Gonet, to put the Glens in the lead. To compound this, Paul Allum found himself having an early bath on the stroke of half time. Paul McLaughlin managed to get his body in front of Allum on the halfway line for a fairly soft foul. It was more surprising that the ref decided to issue a yellow card. Not realising he had already booked Allum, the ref then showed the red card due to the prompting of the Glens bench. It is safe to say that the second yellow card may not have been issued if the ref had known Allum had already been booked.

Amazingly, this prompted the Bankies into action, and they equalised in injury time. A Smith corner found Mackie at the back post. He could only return the ball back into the six yard box, where McInnes was placed to prod home his first goal of the season.

The 10 men Bankies began the second period at a frantic pace, chasing down every ball and not letting the Glens settle. Stevie Dymock was like a man possessed and he got his reward seven minutes into the half with one of the best individual goals you are likely to see. He got on the end of a Mackie Knock on, and lifted the ball over two Glens defenders before drilling the ball home to give the Bankies an unlikely lead.

If the Bankies could have consolidated this lead for a period of time, it may have led to the Glens becoming more panicked, but it only last four minutes. Fraser crossed from the left wing and the ball was headed back across goal where Dickson was well positioned to head home.

At this point, it seemed like Clydebank would not be able to keep up the high tempo with only ten men and on the hour this was made more obvious after they were reduced to nine men. Again, the ref awarded a free kick against McInnes for a fairly innocuous challenge, and to everyone's surprise he showed the Bankies defender a second yellow card. The Bankies were now up against it.

It is to their credit that the Bankies created the first real chance after going down to 9 men, when John Harvey unleashed a fantastic shot from the edge of the box which just went wide with Black beaten. The Glens were now doing most of the pushing, but the Bankies were defending resolutely, and apart from a deflected Dickson effort the home defence were keeping their goal intact.

However, after two red cards, an own goal, and a penalty the Bankies were to experience more bad fortune. With quarter of an hour left Burke cut inside from the right and he unleashed a left-footed shot that took a wicked deflection and flew into the corner of the net to put the Glens 4-3 up. The Bankies deserved so much more for their efforts, but luck had well and truly deserted them. With seven minutes remaining John Harvey curled in backpost corner that appeared to be handled in the box by McShane by not one, but two hands and still nothing was forthcoming from the officials, and this just about summed up the match. The Glens could have added a further goal, but a brave goal line clearance prevented them from doing so.

This game had the makings of a classic, and maybe Glens’ fans will think it did end up being one, but the red cards marred an otherwise superbly entertaining game that was keenly contested but never dirty. The Bankies can take great credit for their efforts in face of adversity but it is Rutherglen who take away the points, and now the players have to dig deep into their resolve when they travel to play Kilsyth on Wednesday night.