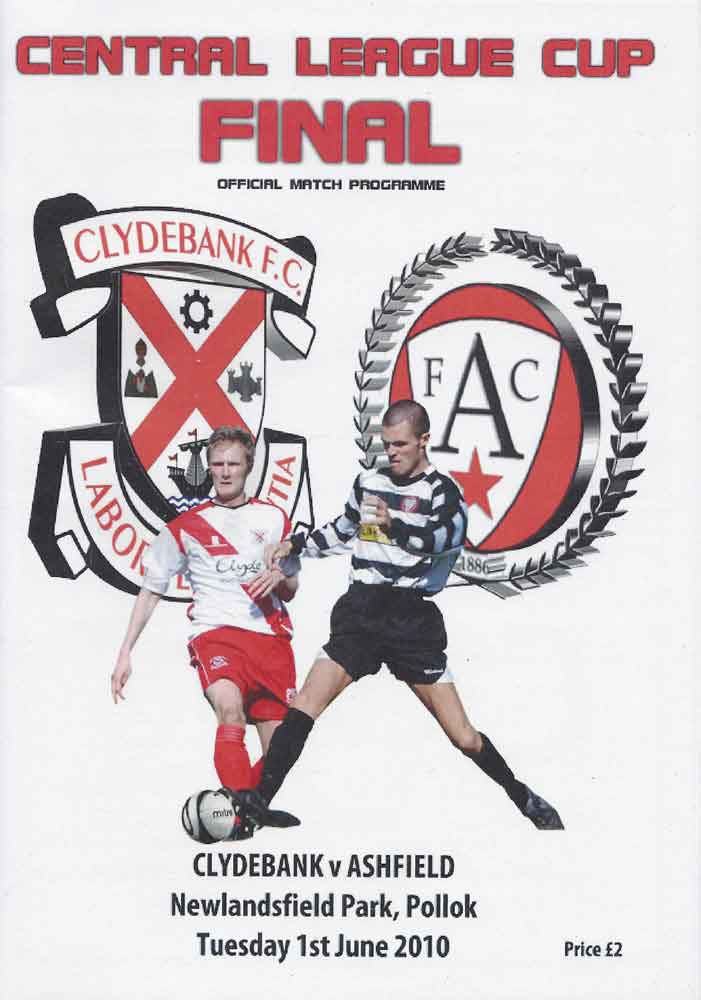 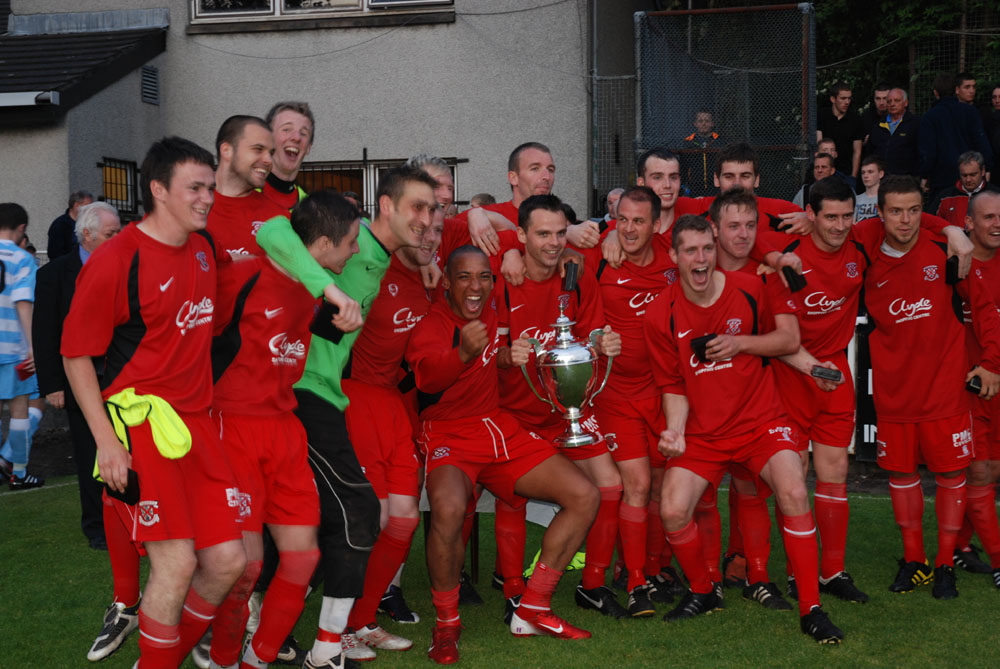 Clydebank took home the Central League Cup tonight after triumphing by two goals to nil against Ashfield at Newlandsfield Park. A goal in either half from Gary Lynn and Mark Kilpatrick sealed the trophy for the club in a match that was dominated in the main by luckless Ashfield.

The Bankies were on similar lines to the side that carried the side through the last two rounds of the cup, with Dymock being the only change, coming in for Molloy. The surprise of the season was Stevie Dallas taking a place on the bench. He may only have been injured for 6 weeks, but he has missed 17 matches in that time. It is an incredible schedule by anyone’s standards.

Ashfield hadn’t played in nine days, so it was no surprise that they started off the sprightlier of the two sides. They forced several corners in the opening spell, and may have opened the scoring when a neat one-two gave O’Donnell a chance, but Vezza bravely blocked the ball.

The Bankies were struggling to find any real rhythm, and were only showing glimpses of the form that took them to the final, whilst Ashfield were full of running and were passing the ball about crisply. With quarter of an hour gone, the Saracen Park men should have taken the lead, when a long throw was helped on at the near post, and O’Donnell volleyed past when he should have ripped the net from the goal frame.

Minutes later and another throw caused problems in the Bankies rearguard. As the ball was not cleared properly, Maxwell hooked the ball towards the goal, but Stefan Gonet produced a top class save to keep the scores level.

Midway through the half, the Bankies finally started to come alive. A Gary Lynn free kick was cleared to the edge of the box, where Stevie Dymock attempted an audacious volley, but the ball sailed over the bar.

On 26 minutes the breakthrough came, and it was the Bankies who made it against the run of play. Gary Lynn sent in a vicious in-swinging free kick to the back post which ended up in the net via a combination of Thomson, and Prior appearing to get in each others way. It was tough luck on Ashfield, but it should have been defended better.

Within five minutes, Ashfield thought they had hit straight back when O’Donnell slammed the ball into the net from close range. Perhaps, if Maxwell hadn’t touched the ball on it’s way through, then the goal might have stood.

Half time couldn’t come quickly enough for the Bankies who were well below par, but the goal had a few more anxious moments before the break. Maxwell volleyed over the bar, after Thomson had hit his initial free kick at the wall, then the Ashfield no 9 made a superb run down the left wing and cut it back superbly for Passmore, who curled it over the bar.

The Bankies did create a couple of opportunities themselves, with Fitzsimmons coming close from a free kick that was deflected from a corner, and then Dymock almost putting the resulting flag kick into the net with a neat flick at the near post.

The second half was a much more balanced affair, with chances created being fairly equal, though Ashfield saw a lot more of the ball. This would be expected as the Bankies are a resilient bunch, and don’t mind teams passing the ball about in front of them.

Within a minute of the restart Ashfield almost committed suicide, by giving the ball away deep in their own half. Vezza was alert and quickly lofted the ball into the box, where Chris Mackie headed just wide of the post.

It was a much more end to end match now, and Ashfield had two quickfire chances. Firslty, when Passmore had too much time to aim a shot from 25 yards, but it was too straight and Gonet saved, then Martin shot over the bar after Cairney got himself in a bit of a fankle on the edge of his own box.

Mark Kilpatrick entered the fray after 55 minutes, and he was in the action straight away as he was brought down for a free kick on the left wing. It was almost number two for the Bankies as Mackie headed powerfully at the goal from Hailstones’ free kick, but Prior redeemed himself, by making a fantastic save on his left hand side.

This was the Bankies best spell, and tenacious pressure from McInnes won him the ball, and as the goal opened up in front of him, he had a typical defender’s nose bleed and weakly shot along the ground into the arms of Prior.

Just after the hour and the Bankies doubled their lead. Nikki Cairney played athrough ball that should have been cleared, but Reilly let the ball roll over his foot giving Mark Kilpatrick a clear run-in on goal, He was under pressure the whole way by Thomson, but he kept his nerve to hold off the defender and expertly slot the ball into the bottom corner of the net.

The Bankies supporters started to think it was their night and two minutes later Mackie almost made it three. Vezza broke quickly and played Mackie through on the right hand side. He could have squared it but elected to go for goal himself, and Prior again made a great stop on his right hand side.

The remaining twenty minutes or so saw Ashfield try more desperately trying to pull a goal back. They did have the ball in the net on two more occasions, but the linesman quickly had his flag up in both instances. Ashfield weren’t as incisive as they had been in the first half, and it was becoming progressively more difficult for them to get in behind the Bankies defence, and when they did they made the wrong decision. An example of this was when Maxwell, did well to get to the bye-line, but instead of laying the ball back to the queue of waiting men, he shot from an impossible angle and the chance was gone.

Ashfield’s best moment of the half was right at the death, when Martin sent in a tremendous dipping shot, but there was no beating Gonet tonight as he threw himself backwards to superbly tip the ball over the bar. The last chance came when Stevie Dallas, making a welcome return to the Bankies side, headed a free kick straight at Gonet.

The ref blew after almost three minutes of injury time, to jubilant scenes on the pitch and on the terraces. When Gary Lynn was presented with the trophy, it is a moment that will live long in the memory as the Bankies claimed their first cup trophy in a generation.

It would almost be unfair to pick out the best performers on the night, but Stefan Gonet had several important stops, Mark Hailstones’ had one of his best ever days in a Bankies jersey, Martin McInnes showed the drive and determination that fans love to see, and Mark Kilpatrick has been a revelation (again) since signing for the club. Congratulations Bankies!!