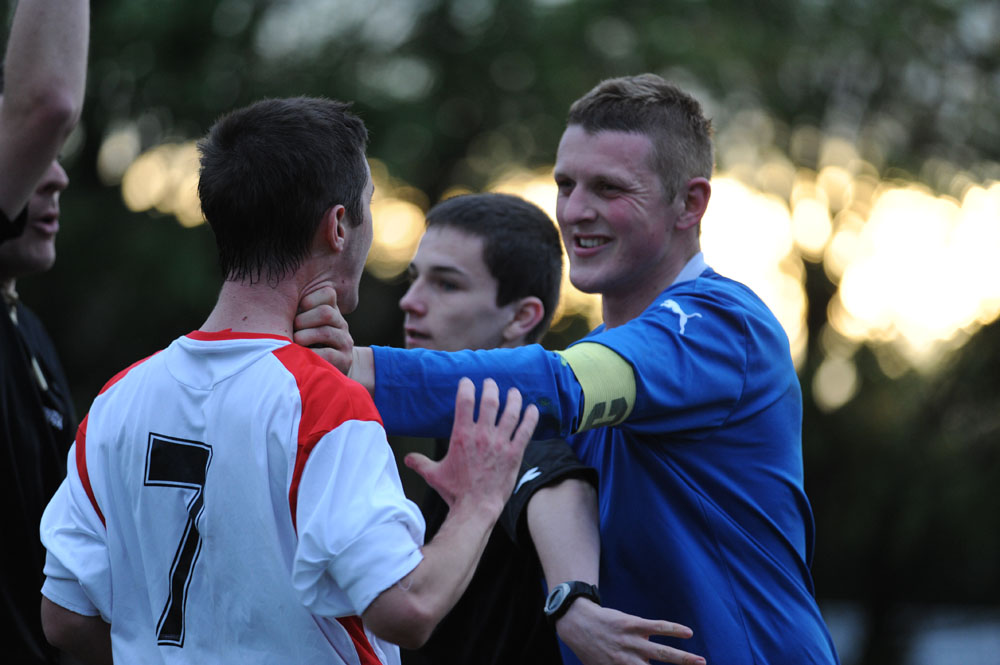 Clydebank powered into the final of the Central League Cup with a dramatic comeback against Super Premier side, Petershill. In a pulsating ninety minutes, the Bankies seemed down and out after going two goals down in the opening half hour, but with grit and determination, the score line was reversed thanks to counters from Hailstones, Campbell and Mackie.

Budgie McGhie stuck with the same eleven who had put Rutherglen out of the competition only two days earlier. This was the first time since last September that the same starting line up took to the field in consecutive matches. Playing in a now familiar line up with Chris Mackie ploughing a lone furrow up front, the Bankies were prepared to concede territory to their higher league opponents, and try and hit on the break.

Ex-Bankie, James McKinstry was the first to aim an effort on goal in the first minute but he shot wildly over the bar. The first real goal scoring chance of the match fell to another ex-Bankie, Paul Craig. He was put through on the right hand side of goal and he clipped a shot over the advancing Gonet, but the ball just crept past the far post.

After the opening spell had calmed down, the Bankies began to show encouraging signs by making chances at the other end. Fitzsimmons arrowed a free kick just over the bar and then Chris Mackie had two chances in a minute. Firstly, the big striker made an opportunity for himself by holding the ball up and turning well only to see his shot charged down, then he took advantage of some sloppy defending to crack in an angled volley but Nugent was well positioned to save.

Shaun Molloy then tested Nugent with a right-footed drive, before the visitors took the lead midway through the half. The Bankies defence failed to clear a cross ball effectively enough, and Robertson picked it up on the touchline. He dinked a neat cross to the back post where McBride was standing unmarked, and he scored possibly the easiest goal of his life from only a couple of feet out.

Petershill had their tails up now and began to ask questions of the Bankies defence. Craig cut inside from the right and leathered the ball over the bar with an ambitious effort. Clydebank responded with Fitzsimmons cracking a Mackie knock down just wide of the post.

After thirty-two minutes Petershill increased their lead courtesy of an own goal. Paul Craig glanced a header across the six-yard box from a well-delivered corner kick. Shaun Molloy was the unfortunate party to score the Bankies third own goal in as many games, when he stuck out a leg to cut the ball out, but only succeeded in diverting the ball into the net via the underside of the bar.

With this being Clydebank’s thirteenth game in May, you would be forgiven for thinking that this would be the end of the road for the Bankies. However Mark Hailstones had other ideas. The fast improving Nikky Cairney broke quickly and clipped the ball through to Hailstones, who charged forward from the half way line. With little happening in front of him the Bankies favourite crashed the ball into the net with a fantastic twenty-five yard drive.

Before the break Petershill could have restored their two goal advantage when McInnes made a complete hash of a pass pack to Stefan Gonet. Robertson intercepted the ball, but found the Bankies No 1 in top form as he made a superb stop to keep the score at two-one going into the interval.

Petershill came out looking to finish the tie off early in the second half and forced a series of corners. This stung Budgie McGhie into action as he took off Molloy, and brought on attacker Kilpatrick to try and swing the match in the Bankies favour.

The Bankies did start to make more of an impression, but it was Petershill who were seeing the goalmouth action. Keenan saw a shot deflected for a corner, then Clydebank almost conceded another own goal from the resulting corner kick. Gonet did well to slap the ball away from the goal as it nearly went straight in from the corner kick, but it rebounded off a defender, and only good fortune saw it land back in the keeper’s arms.

Dymock then entered the field for Fitzsimmons as the Bankies looked to move up a gear, and the reward came soon after. With 68 minutes on the clock Gary Lynn sent over a superb corner kick, that was met in the six yard box by Ross Campbell who powered the ball into the net to draw the sides level.

The last twenty minutes of this tie was cup football at it’s very best as both teams went at it hammer and tongs. The chances were coming so fast it was almost impossible to note them all down.

Within a minute of the equaliser, a Billy Jones corner kick almost found it’s way into the net via a defender, then Stefan Gonet made an outstanding save to turn a McBride shot round the post. As the play swung back the other end Petershill had an unbelievable let off when Ross Campbell sent in an acrobatic cross into the box. Mark Kilpatrick controlled the ball superbly and turned on a sixpence, and his shot beat Nugent all ends up, but a Petershill defender was there to hack it off the line.

As we entered the last fifteen minutes, Kilpatrick went close again, when he received a Mackie knock down, but his shot screwed wide of the post. Moments later Hailstones, played a smart ball inside to Cairney who took his time before releasing Dymock, whose first time shot seemed certain to go in but an almost slow motion deflection saw the ball spin agonisingly spin over the bar.

The Bankies were now looking the more likely of the sides to snatch the winner, but Petershill were still a threat, especially from Paul Craig. The big striker sent in a rasping shot from 25 yards, that Stefan Gonet saved wonderfully, by diving full length and tipping the ball off the post for a corner.

It wasn’t long before the play was back at the Petershill end, and Dymock was unlucky for a second time when another shot was deflected for a corner kick. This time the goal was not to be denied. In a carbon copy of the equaliser, Gary Lynn sent a corner kick into the six-yard box. This time, Chris Mackie stooped to nod the ball home completing the comeback and giving the striker the goal his play had merited.

Petershill could have forced penalties when Jeffrey raced down the left wing and brought out another superb save from Gonet. The ball sat up invitingly on the rebound, but with an open goal the ball was put wide thanks to pressure by Campbell.

There is a small footnote to this match. Up until the 88th minute, it had been a sporting affair with no bookings and a lot of entertainment for the fans, Unfortunately, Keenan spoiled that not only by getting booked, but barely a minute later getting sent off for a ludicrous challenge on Chris Mackie. His subsequent actions did himself no favours as he grabbed Nikky Cairney by the throat.

This incident didn’t take the shine off the match from a Bankies point of view, as it was a superb comeback against higher league opposition. Ashfield now wait in the final. The clubs have already met three times this season with all the encounters being close affairs. Ashfield have came out on top in two of these occasions, so it is an early warning that this will be no easy task.