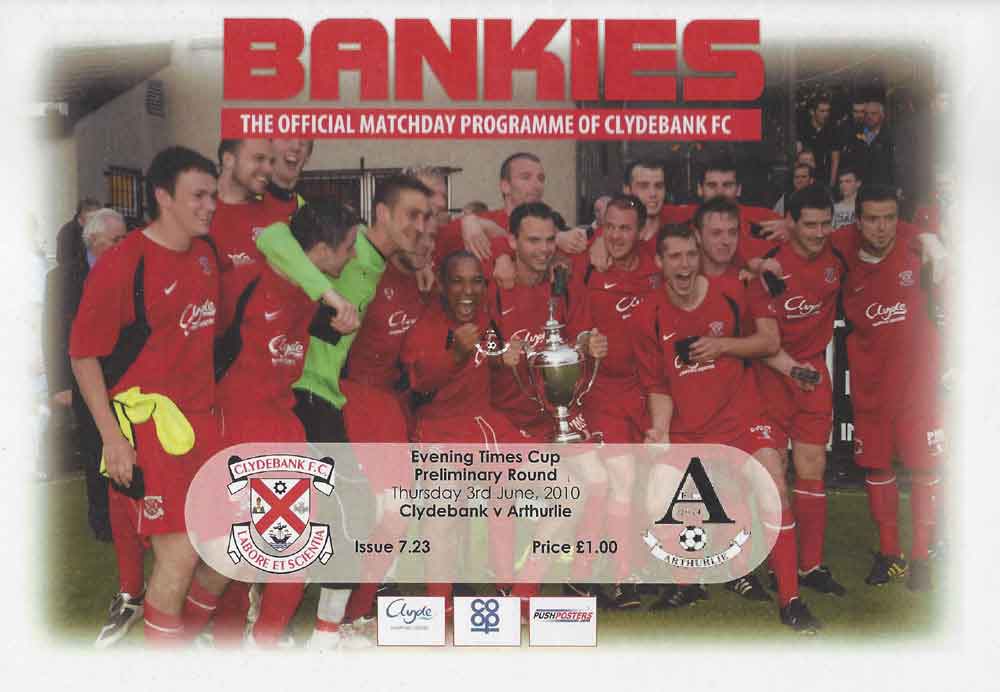 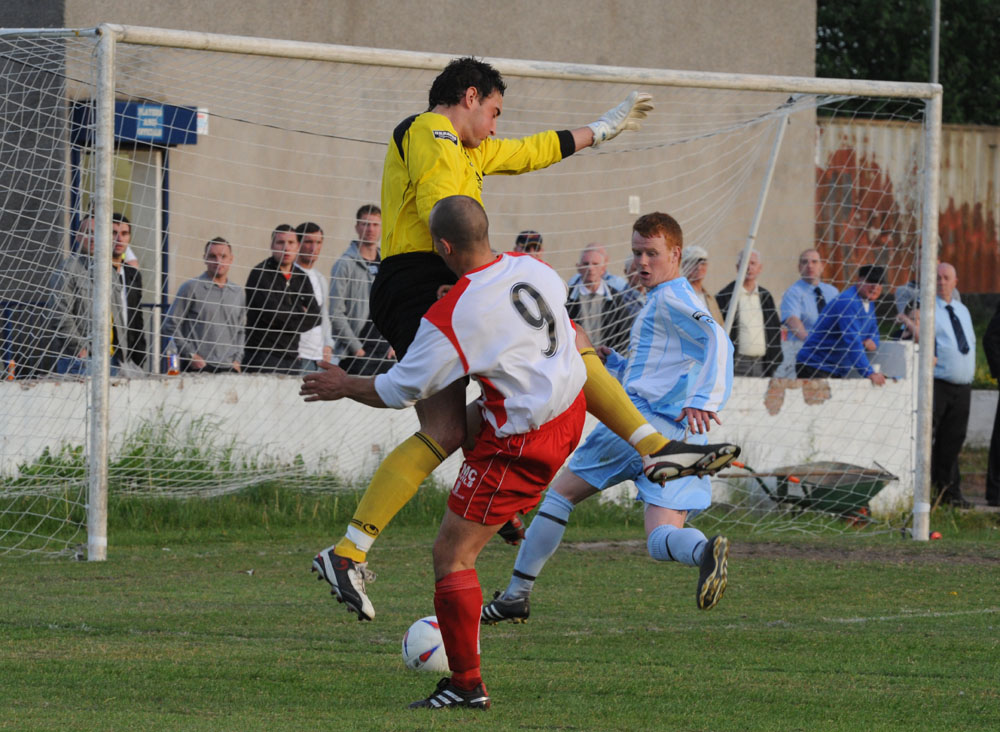 After their heroics on Tuesday night in capturing the Central League Cup, the Bankies were thrown into action only two days later in the Evening Times Cup Winners Cup against an Arthurlie side that had just finished in second place in the Super Premier League.

Budgie McGhie made nine changes from the cup winning side with only Cairney and Dymock retaining their places. By contrast Arthurlie were at full strength, but over the course of the ninety minutes it was hard to tell who was the Super Premier club.

The first half was a relatively even affair with not much to choose between the sides. Goalmouth incident was at a premium as well with Molloy coming close with a header from a Harvey corner being one of the better chances.

Arthurlie’s best chance of the half was from a McKeown header, as he did well to hold off John Harvey at the left-hand post. However, his attempted diagonal header went past the opposite upright.

On the half hour, Marshall worked a one-two with Bankies impressive new signing MacKinnon, but shot over the bar, and as the half came to a close Paul Allum’s teasing cross was headed into the ground by Cairney and the ball bounced up invitingly for Kilpatrick, but Cannon did well to block with his legs.

The Bankies had more than matched their higher league opposition, but within a minute of the re-start found themselves a goal down. A left to right diagonal ball found Winter at the edge of the box, and he thrashed it into Campbell’s near post at a fierce pace giving the Bankies stopper little chance.

The Bankies response was immediate as Dymock had the ball in the net moments later. Unfortunately, the linesman flagged for offside to keep Arthurlie in front. It was unlucky for Dymock, as it was a fine finish from the front man after Kilpatrick had put him through. The Bankies continued to search for an equaliser as Cairney flashed a header wide.

With an hour gone MacKinnon played the ball through to Kilpatrick, but he didn’t get enough on it, and it rolled kindly into Cannon’s arms. Soon after a probing run and cross by Harvey was headed goalward by Fitzsimmons, but Cannon touched the ball round the post superbly.

At the midpoint of the half Arthurlie began to assert themselves more, and Malcolm shot over the bar when the ball fell nice to him just outside the box. Then a minute later McLay was on the end of a fine move by the visitors but his powerful header was well held by Campbell in the Bankies goal. This spell of pressure ended with Arthurlie doubling their lead. Malcolm was involved in the build up as the ball spun out to the left hand side of the box where Williams fired in a fine diagonal spot that found the corner of the net with Campbell stranded.

The Bankies have shown great character recently, and it looked like they may be about to stage a comeback as they pulled a goal back minutes later. Harvey and MacKinnon worked a one-two on the left wing and the formers deep cross found Dallas who looped a header over the goalkeeper and into the net.

The remaining ten minutes saw chances at both ends as the Bankies threw men forward in search of an equaliser. Kilpatrick thought he had got it with five minutes remaining after Gallacher fluffed a clearance across his own box. The Bankies diminutive striker wrong footed the keeper with a great header, but could only watch as the ball slipped agonisingly on the wrong side of the post.

Right on the final whistle Arthurlie could have tied it up with a breakaway, but Camp foiled the chances with a fantastic double save.

With that, the Bankies exited the Evening Times Cup, and as the fans let the ground the consensus was that the performance was excellent, and the result was more of a relief than disappointment as it is not desirable to have the Lanark games put any further back.