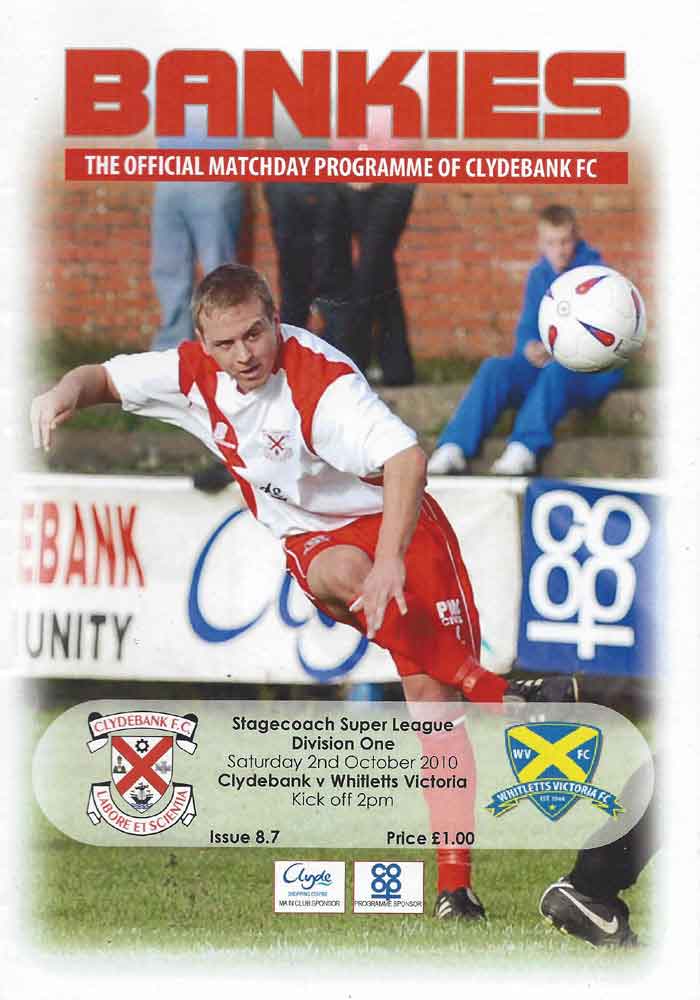 Clydebank turned in their most emphatic performance of the season as they totally over ran league leaders Whitletts Victoria at Holm Park in this top of the table encounter. The result only reads 2-0, but apart from the opening quarter of an hour, the visitors rarely threatened the Bankies goal and the margin of victory could have been greater.

The Bankies knew that they could go top of the league coming into this match if they could beat the Ayrshire side by three clear goals. However, it was the Vics who showed early on why they were unbeaten in the league this term.

For the first 15 minutes, Whitletts played with great confidence and at a tempo that seemed to take the Bankies by surprise. Cameron sent out a warning shot in the first minute when he blasted a shot over the bar from 25 yards. It was as impressive a start that any visitor has ever made at Holm Park, and when Hanvey tore through the Bankies defence on the left hand side it looked like Whitletts would take the lead. The winger rolled the ball across to Kerr who looked certain to score but two deflections saw the ball go away from goal, in what was an undoubted let off for the home side.

Still in the first ten minutes, and Main came close for the Vics again. Howe was brought down on the edge of the box, but Main picked up the ball as the ref played advantage. The striker skipped inside avoiding a challenge, but his right footed shot went high and wide.

It took until the 18th minute before the Bankies had their first real decent passage of play, putting the ball into dangerous areas without causing too much panic in the Whitletts rearguard. However, only a few minutes later the passing and moving became crisper and the way to the goal began to open up. A great move involving MacKinnon and McComish saw the latter cross the ball to the back post where Paul Allum volleyed into the side netting.

You could feel the tide turning and midway through the half the breakthrough almost came. McPherson showed great strength to win the ball from McKissock on the edge of the box. The striker, replacing the absent Mark Hailstones, had only one thing on his mind, but Barclay tipped his deflected shot superbly over the bar.

The goal was looking inevitable and McPherson couldn’t have came any closer after 32 minutes when he rattled the inside of the post from point blank range. Again it was due to a superb ball into the six-yard box by McComish. It couldn’t be denied any longer and a minute later the Bankies opened the scoring. It was all due to the persistence and strength of Darian MacKinnon. He tried to work a one two with Barry Crawford and he certainly wasn’t the favourite to win the ball, but his will to get there put him clean through on Barclay. He side stepped the keeper with ease and stroked the ball into the net.

Whitletts tried to inject some life into their play, and a snapshot from Davidson at the beginning of the second half was as close as they would come, but it was a routine catch for Stefan Gonet. Darian MacKinnon really came into his own in the second period as time and time again he penetrated the visitors defence, and it was just the final moment that prevented the Bankies stretching their lead.

It was another near thing after 53 minutes when Paul Allum intercepted the ball on the right hand side. He drove down the flank, and whipped in a wicked cross, but Barclay smothered the ball before Dallas could get on the end of it. Moments later, Dallas won a ball he had no right to, and despite being fouled, McPherson was able to take advantage. He could have slid the ball into Allum, but elected to shoot instead producing a superb fingertip save from Barclay.

Midway through the half, at the risk of being repetitive, MacKinnon broke against from his own half directly into the opposition penalty box. He was clear and could have, some will say should have shot, but he attempted to lay it off to give McPherson an easy tap in, however a defender read the pass and was able to clear.

The pressure continued to build, and MacKinnon was at the heart of it again. This time he drove to the dead ball line and fired in a cross that was just cleared at the near post for a corner via the goal frame. The Whitletts goal could hold out no longer, and the Bankies finally put the ball in the net after 72 minutes. The ball was played to McPherson, and via a series of ricochets, it found its way to Stevie Dallas in the box. The ever-reliable striker found the net from 16 yards for what he thought was his third goal in as many games. However, after a long delay and the ref consulting his assistant, the conclusion was an offside decision, which could only have been for the initial ball through to McPherson.

The relief was short lived for Whitletts, however as the Bankies did score just a minute later. A fine diagonal ball found Allum just inside the box on the right hand side. With the aid of a deflection, his shot soared high into the top corner of the net with the keeper beat all ends up.

The second goal killed off any hopes Whitletts had of getting some kind of result from the match, and from there on in, they looked like a beaten team. It would now be down to the Bankies to see if they could get the third goal to take them top of the league. Unfortunately, it never came despite more chances being created. Perhaps the best chance fell to McComish who shot over the bar from a good position in the box after good work by substitute Stevie Dymock.

From a tricky beginning the Bankies negotiated Whitletts challenge well, to such an extent that they had them on the ropes at the end of the match. In a day where every player contributed, MacKinnon was outstanding in midfield, with notable contributions from Campbell, Martin and McComish. The Bankies now sit joint top, but with three consecutive away ties it is no time to be complacent as points will have to be gathered in this run to keep promotion a reality.