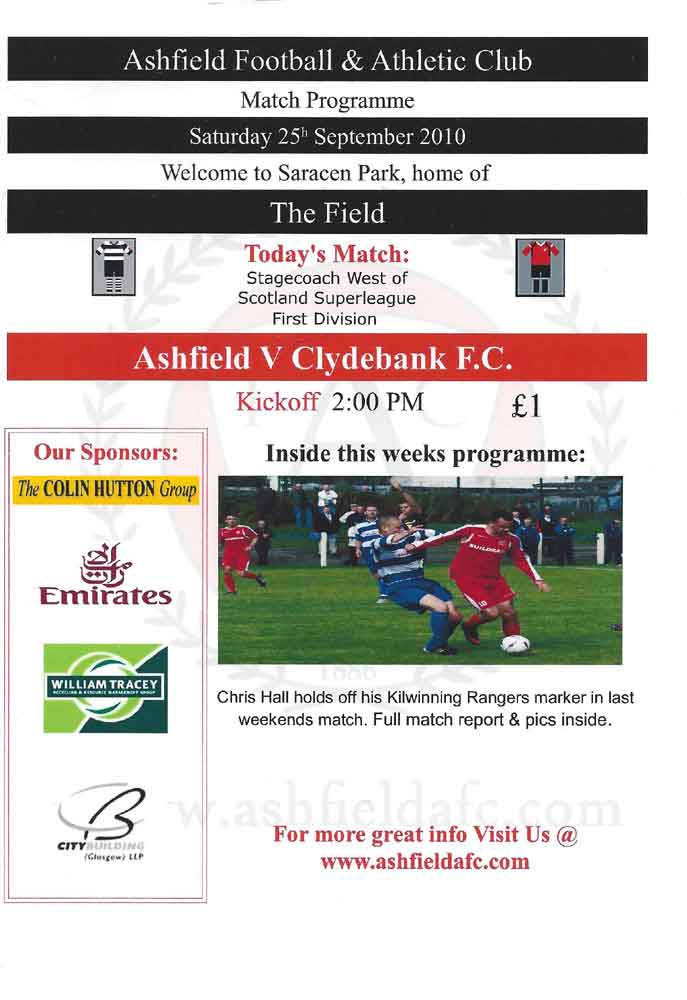 Clydebank took advantage of the reduced fixture card – due to the September weekend - to move into third place in the league after they emerged from Saracen Park with all three points against an Ashfield side that hit the woodwork three times. On a beautiful day for football, goals from strike pairing Dallas and Hailstones turned over an early deficit to put the Bankies in front before Stefan Gonet made sure of the victory by saving a penalty from Jim Smith.

It was one of those rare occasion that the Bankies fielded the same starting line up for two matches in a row, and there were no complaints after this same side’s comprehensive win over Bellshill last week. All eyes were also on Mark Hailstones making his 250th all time performance for the club.

It couldn’t have got off to a worse start, however. With only three minutes gone, and nothing of note to report Martin McInnes allowed himself to be turned on the right wing. The ball was crossed in low towards the near post, and amongst a melee of players Ferguson managed to squeeze the ball between keeper and post to open the scoring.

The Bankies defence looked nervous in the opening exchanges, and Moffat was caught claiming for a foul that allowed Martin to get in behind him. Luckily, Stefan Gonet was able to stop the midfielder’s attempted cut back.

As the match settled down, Clydebank’s midfield were starting to push Ashfield back, and it was no real surprise when the scores were level after 18 minutes. It was a superbly worked goal too, with Hailstones and MacKinnon combining before Paul Allum delivered a fantastic first time cross into the six yard box that was headed home from close range by Stevie Dallas.

The Bankies were now getting the better of their hosts and Hailstones was unlucky to volley over the bar from 12 yards out. However, Ashfield are one of the most improved sides in recent seasons and they showed you cannot discount them on the half hour when Fraser was given too much space and time at the edge of the box. The midfielder curled a beautiful shot past Gonet, but for the first time in this match the woodwork came to the keeper’s rescue.

As is so often the case when a great chance is missed, the Bankies took the lead with their very next attack. Awarded a free kick around 25 yards from goal, Mark Hailstones stood behind the ball, and the Bankies front man celebrated his 250th appearance by cracking the ball into the net with a magnificent effort that dipped viciously into the net. Despite continuing to dominate the Bankies could not unlock the hosts defence any further before the break.

The second period began in much the same vein as the first with a lot of misplaced passes seeing the ball go out of play a lot on Ashfield’s narrow pitch. It was also punctuated with the referee punishing some of the more over the top tackles. Substitute Chalmers was one of the ten players yellow carded on the day after only being on the park for a matter of minutes.

The first fifteen minutes saw the Bankies continue to be the better side, but the killer third goal would not arrive. McComish headed past the keeper’s right hand post after a looping cross from Allum, then two chances in a minute were passed up. A cleverly worked free kick saw Crawford arrive late in the box where Allum picked him out. Unfortunately, Prior saved the big defenders shot. Just after this, Dallas picked out Hailstones in the box, but Prior saved well again. The ball rebounded out to McComish who was unlucky to see his effort deflected for a corner kick.

After this period Ashfield upped the tempo to try and get back into the game. Hall held off McInnes in the box to shoot at Gonet’s near post, but the ball was saved for a corner. Credit is due to the Ashfield man, as he may well have been given a penalty had he gone down due to the attention of McInnes. Moments later and Fraser blazed the ball over the bar from a good position when the ball was not cleared properly.

With 69 minutes gone, Ashfield were given the opportunity to draw level when they were awarded a penalty kick. It seemed like a harsh decision as Hall went down a little easily, and Moffat was booked for protesting. Smith took the responsibility for the kick, but his shot low to the right hand corner, was stopped superbly by Stefan Gonet who turned the ball away one handed.

The Bankies were still threatening the Ashfield goal, as Dallas lashed in a volley from the edge of the box but it was too straight and Prior was able to make the save. After this Budgie McGhie made two changes and reverted to five at the back as he sensed the growing danger from Ashfield. These changes had the desired effect initially with the Bankies creating the next three goal scoring opportunities.

Firstly, Dallas headed over from a long cross from MacKinnon, then the ex-Petershill man had another headed attempt following great work from Paul Allum at the corner flag. Finally, the best of them all was a header from substitute Stevie Dymock. Unfortunately he could not generate enough pace, and Prior held onto the ball on his right hand side.

With time running out, and the Bankies only leaving one man upfield, Ashfield were pushing closer and closer to Stefan Gonet’s goal. It was not to be the home side’s day as they rattled the woodwork twice more. Firstly, a volley from the edge of the box crashed off the keeper’s right hand post, then in injury time Hall hit the same post with a shot/cross from an acute angle.

This makes it five games without defeat for the Bankies after the opening day loss to Renfrew. Ashfield are a strong Super League side and they will win more games than they lose, so it is pleasing to win at a difficult venue. Next up, surprising league leaders Whitletts visit Holm Park. It is another reduced league card due to the Scottish Junior Cup, and the Bankies can top the league if they win. No other incentive should be needed.