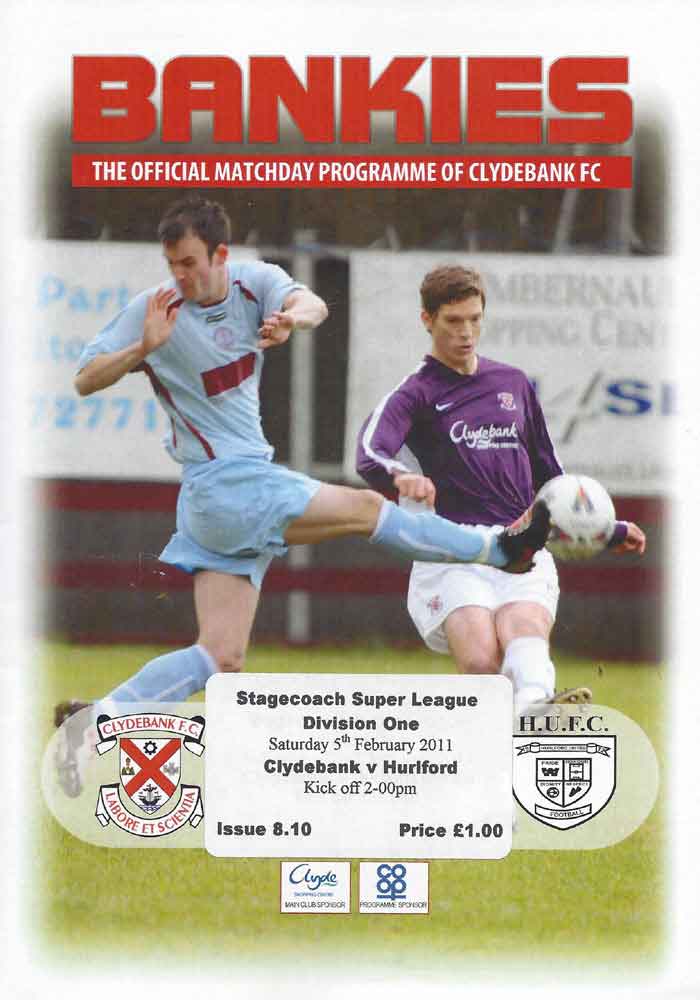 Clydebank finally got the second half of the season underway after ten consecutive Saturdays were crossed off the calendar due to one of the worst spells of weather in living memory. Unfortunately, it was to be a bad day for the Bankies as Hurlford United left Holm Park with all three points in an entertaining match.

There was much head scratching amongst the home support as the side was read out, with only one recognised striker on the team sheet. Andy Bisset was handed his debut after signing from Arthurlie, and Michael MacAdam also made the starting eleven despite not even featuring from the bench all season. Other new recruits Murray and McMenamin had to settle for the bench alongside long-term injury crock Chris Mackie. Martin McComish was asked to play in a more central role with Darian MacKinnon being given the task of supporting the lone striker.

This untried set up seemed to backfire spectacularly in the opening ten minutes as the Bankies found themselves two goals down. It was a tale of corner kicks. In the first half Clydebank’s corner kick count was in double figures with no result, but the Ford made it two goals from two with their flag kicks.

The Bankies actually started reasonably brightly with McPherson almost getting on the end of a Highlands near post cross, then a neat turn and shot from McComish was saved by Menzies before the corner kick debacle occurred.

The first goal came when Bissett took a heavy touch on the ball and allowed it to run out for a corner kick. In one of the finest displays of non-marking you are ever likely to see, Paterson found himself in acres of space on the edge of the six yard box to nod the corner kick into the net, leaving Gonet helpless.

It was two only four minutes later. Wilson was allowed to get in behind the Bankies defence and only quick reactions from Gonet stopped a goal as he diverted the ball for a corner. However, Gonet turned from hero to villain from the resulting corner kick as his error allowed Stevenson the opportunity to nod in from close range.

It was a dream start from the Ayrshire men, and it took the Bankies some time to regain their composure. After 20 minutes, the home side forced a series of corner kicks with Campbell being unlucky to see his headed effort come back off the upright. However, it was Hurlford who could have tied up the points as Wilson waltzed through the Bankies defence before unleashing a shot that took the paint off of Stefan Gonet’s post.

The Bankies proceeded to dominate the remainder of the first half, with MacKinnon feeling he had a claim for a penalty kick when he was felled in the box as he tried to get on the end of a McPherson cross. It was mainly corner kicks that were the Bankies main source of goalmouth action, and Moffatt’s back post header was well stopped by Menzies.

The Bankies needed something to take into the second half if there was to be any hope of a revival, and MacKinnon provided it with a minute to the break remaining. Anything good from a Bankies point of view was coming from the powerful midfielder, and when he timed his run to perfection from a Highlands chip he lashed a diagonal shot high into the net despite Menzies getting a glove on the ball.

Any hope of the Bankies turning the game around was vanquished within eight minutes of the restart. In a move that had countless passes in the last third of the Clydebank end of the pitch, ended with McPhee with a simple header at the back post as Hurlford tore the Bankies apart and restored their two goal advantage. It was a stunning goal from a Hurlford perspective but an inept display of defending from the home side’s viewpoint.

McMenamin and Murray were thrown into the fray with Crawford and Bissett going off after an hour. Almost immediately the balance of the side looked to be more balanced, and they started to attack as more of a cohesive unit. The lone striker tactic was still not bearing fruit as time and again McPherson was forced down the channels to receive the ball, and invariably there was no one for him to aim for when he got into a good position.

Again, it was set pieces where the Bankies threatened the visitor’s goal. Kevin Murray saw his header come off the woodwork from a corner kick on the left-hand side. Then, McComish saw his looped header from another corner kick cleared off the line by a Hurlford defender.

Finally, Clydebank got their reward for their persistence and MacKinnon was the scorer again. McPherson made a mess of an attempted cross ball, but was given a second chance as the ball came back to him. This time he made no mistake with a perfectly flighted ball that MacKinnon powered into the back of the net.

MacKinnon almost got what would have been a deserved hat trick with quarter of an hour remaining as he showed amazing tenacity to force through 3 strong challenges on the edge box, but Menzies was alert and blocked him at the last moment.

Clydebank continued to dominate until the end of the match, but lacked the cutting edge to unlock the Ford defence. Gordon Moffatt cam closest with a looping header that Menzies tipped over superbly as he had to back track somewhat.

As it was, the visitors held out for a valuable three points and put a big dent in the Bankies promotion prospects. Overall the Bankies played reasonably well for eighty minutes, but defensive lapses in the first ten minutes ultimately cost the match. Being two goals down and playing with one up front for most of the match may not have helped, but there are signs that the new additions to the squad may be the foundations on which to build a promotion bid over the coming weeks. A visit to fellow promotion hopefuls Glenafton beckons next week, and the Bankies need to start picking up victories sooner, rather than later.