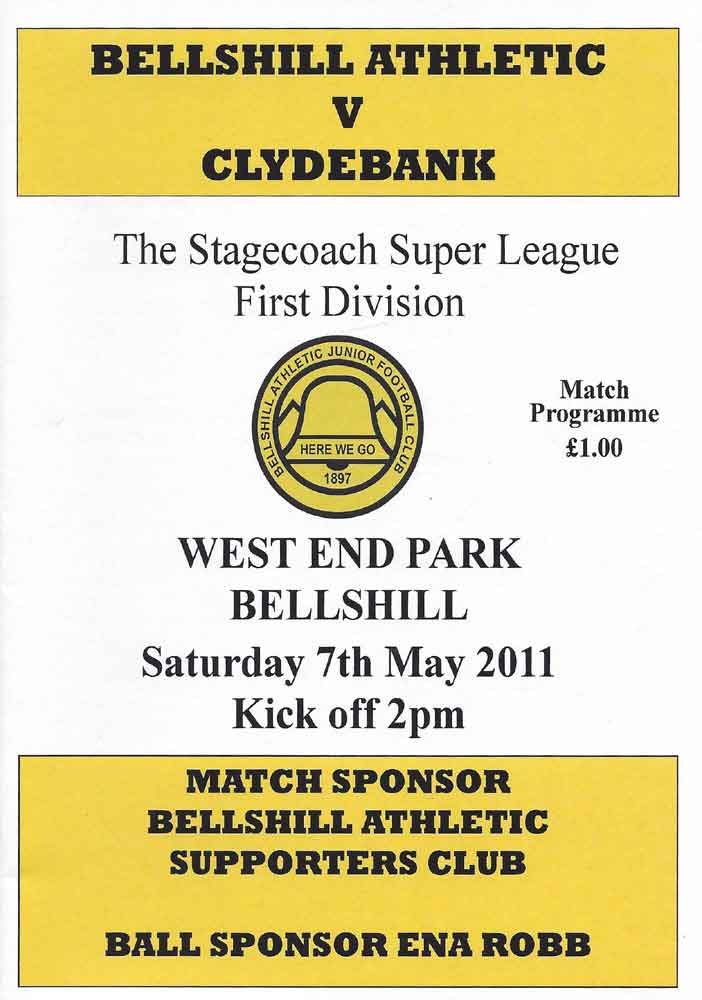 There were jubilant scenes at Bellshill’s West End Park as the Bankies secured promotion to the Premier League in convincing fashion. Goals on either side of the interval by MacAdam and McComish put the Bankies two up. Veteran Bryan Dingwall pulled one back, but it was short-lived as a Hailstones free kick restored the two-goal advantage. With such an important fixture looming the injury situation wasn’t great with Campbell, Murray, McMenamin and Dallas all ruled out. This meant that the youngsters were once more asked to step into the senior player’s boots, with Highlands, MacAdam, and McComish all given starting berths.

Bellshill haven’t had their troubles to seek with Brandon Park, then New Brandon Park all but a distant memory. Now reduced to playing on a public synthetic pitch and staring down the barrel of successive relegations to the district leagues, things could not be much worse for the Lanarkshire side.

With both sides needing the points for very different reasons the match was quite cagey in the opening period. It took until 18 minutes for the first sight of goal, and it came from a neat little lob from Allum on the right hand side, but Donnelly produced a superb save to turn the ball away for a corner. This seemed to rouse Bellshill, and two minutes later they were unlucky not to get a break of the ball from a corner kick which led to the mother of all stramashes in the six yard box. It was impossible to see who finally cleared the ball, but it could quite easily have resulted in a goal

These exchanges relieved the tension, and both sides began to show more attacking prowess. Tommy Martin went wide after being set up by Dymock, then MacKinnon latched onto a Highlands throw in only to see his shot narrowly squeak past the post with Donnelly rooted to the spot. Bellshill probably had the clearest cut effort, when Murray was presented with a free header inside the box. It looked like a goal all the way, until the cat like figure of Stefan Gonet came out of nowhere to touch the ball around the post. It was a save of the highest quality.

With half time approaching the pressure started to build on the home defence. MacKinnon dispossessed Shearer on the half way line, and raced in on goal. In an unusual moment of hesitancy from the bustling midfielder, he allowed Donnelly enough time to get a block in and the ball spun away for a corner. MacKinnon, again, dribbled into the Bellshill penalty box, and the ball ran favourably for McComish who took it on his stride. He rifled in a shot from ten yards, but Donnelly did well to block. Bellshill could not hold out, and the goal came two minutes from the break. It was MacKinnon who was the architect, who showed supreme strength to get to the bye line. He rolled the ball back to Highland who clipped it inside, where Mikey MacAdam was perfectly place to calmly side foot it into the net.

The large travelling Bankies were ready to get the promotion party underway, and two minutes into the second half it truly got underway. A Highlands cross into the box was completely misjudged by Bennett, and the ball bounced away to the left. Martin McComish had to adjust his body, but took the ball with a sweet first time volley, and it sailed into the net via the right hand post to send the fans into delirium.

Bryan Dingwall pulled one back after 54 minutes with a typical poachers goal when he managed to divert an off target Crozier drive low into the goal. However, this setback was not going to dampen the Bankies spirits, when the two-goal lead was restored only three minutes later. Tommy Martin was fouled on the edge of the box, and with Budgie McGhie shouting for Paul Allum to take it, a certain Mark Hailstones ignored the call and curled an absolute beauty into the top right hand corner of Donnelly’s goal.

Bellshill tried gamely to get back into the match with Crozier showing he can shoot from distance on more than occasion. The most notable effort came towards the end when his goal bound effort was touched over the bar quite superbly by Gonet whose recall into the side has been well deserved. In the end up the Bankies could have scored more with man of the match Darian MacKinnon in exhibition mode, setting up McPherson twice but to no avail.

As the final whistle sounded the Bankies fans rushed onto the pitch to congratulate their heroes. It has been a long road to the Premier League, but the club have now arrived. A heavy night of celebration now awaited, but tinged with the reality that the hard work starts here.