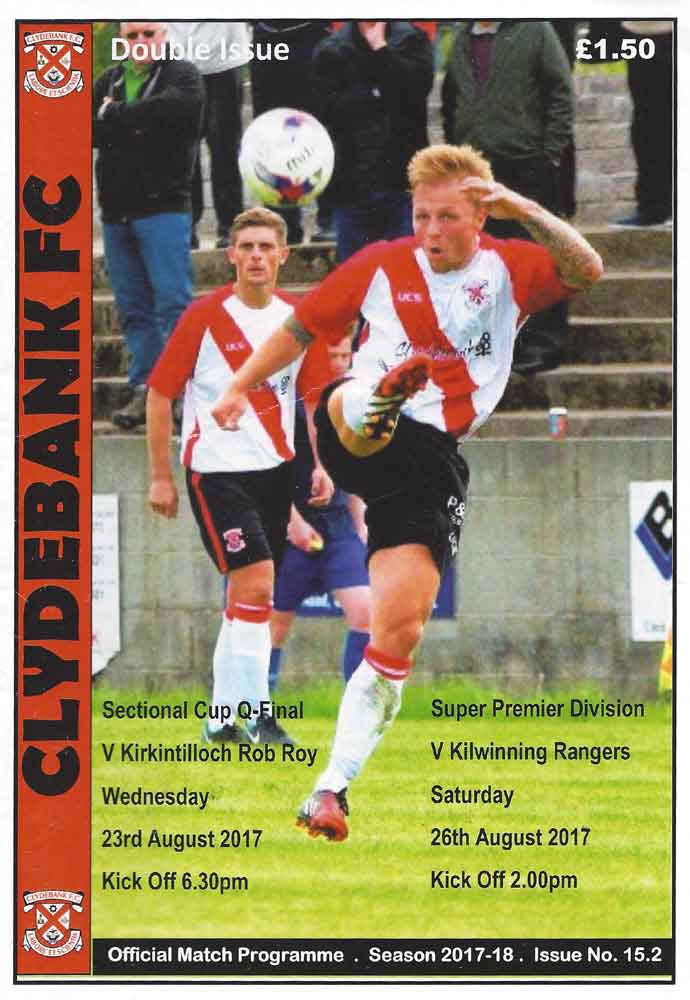 Ten minutes into the second half, Ross Forsyth powered a header into the back of the net to put the Bankies 2-1 in front after being a goal down early on. At this point I thought we were going to go on to win the match, but the last quarter turned into an utter disaster as Kilwinning scored two quick goals which the Bankies never recovered from. A fourth at the death just rubbed salt in the wounds.

Kilwinning had the better of the early part of the game, and scored with their first real chance after 19 minutes. The Bankies defence had umpteen attempts at clearing the ball before Winters drove the ball high into the net. The Bankies grew into the game and deservedly equalised from a near post Shelvey flick following a tremendous run and cross from Johnston. The Bankies controlled the remainder of the half and should have grabbed the lead before half time, with Shelvey spurning the best chance.

The second half saw Kilwinning up the pace, but the Bankies appeared to weather the early storm and took the lead when Forsyth headed home from a corner. Shelvey, who looked to be injured had to come off, and the change in the team dynamic may have contributed in a way to the subsequent collapse.

Two goals in three minutes turned the game on it's head. Firstly Johnny Allan was unlucky to deflect a shot into the corner of his own net wrong footing Lumsden. The next goal was criminal as it came from our throw in near the Kilwinning goal line. Deas poorly lost possession, and the ball was quickly transferred upfield. Andy Paterson probably should have taken a booking for the team but allowed the Kilwinning player to get past him and from that point the goal was a formality.

Johnny Allan left the field just after. He took a hefty knock just before and that may be why he was subbed. The Bankies never looked like getting the equaliser, and paid the price at the end for trying to get back on terms. It was a personal disaster for Ross Forsyth, who was punished for a dreadful error and gifted Kilwinning their fourth goal.

So where did it all go wrong? It seems obvious even at this early stage that we don't have a lot of strength outside of the starting eleven, and once substitutions are made or the formation changes the team quickly loses its way. We also seem to have a fitness problem as several of the players are fading badly in the last quarter. Gow can quite happily fit in defence and Lafferty, although unproven, has shown some positive signs. That's about it though.

As the game wore on today, I thought this was definitely a game we should be looking to pick up points from. We competed well and were worth the lead when we went ahead, then Shelvey had to go off. Josh Watt went up top, and while he looks a decent winger, he isn't going to hold the ball up or win many aerial challenges. Shelvey's replacement, Reece Pearson looks every bit the same player as the one who played for the Bankies five years ago. He didn't last too long then, and I wasn't exactly thrilled when McAnespie brought him back to the club. Nothing has happened thus far to change my mind.

When Johnny Allan went off, I knew we were in trouble. Alan Vezza hasn't been on his game recently, and the subsequent formation changes were doomed to failure as the subs just aren't as good, coupled with the fact that Deas and Johnston in particular look short on fitness.

That's zero points from two games that should have got us at least two. There are no easy games in this league, so it is disappointing not to get anything in games where we probably should have. Every point is going to have to be battled for. There are a lot of positives however and I believe that McAnespie is the guy to do it. Hopefully he will find the room to add to the squad even if he has to move one or two on.