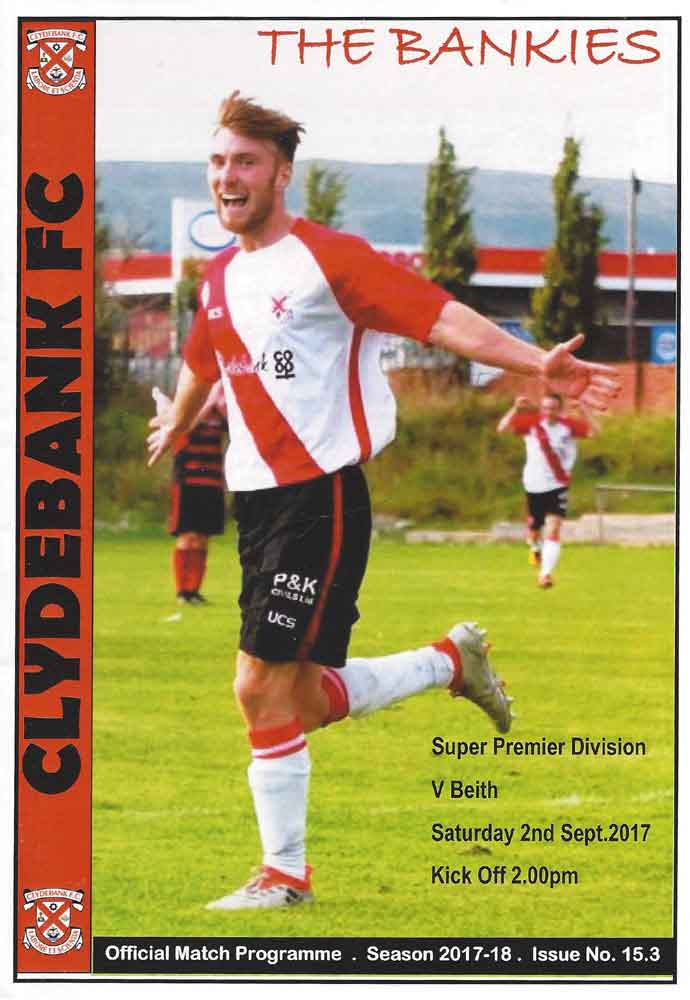 Standing at the interval, we were talking about the first half that had gone before and I mentioned the problem of having three players booked in that period. My exact words were, "What are the chances of us ending this game with 11 men?" Well, I only had to wait three minutes of the second half to find out, and the answer was no chance. With the red card, went the game and the Bankies now sit pointless after three games.

Let's rewind a wee bit first, though. Beith are one of the top sides in the league and it was always going to be a tough match. The Ayrshire men were undoubtedly the better side in the first half, but didn't threaten our goal unduly. The Bankies weren't exactly doing much in that regard either. The problem was retaining possession, or more the lack of. We hardly won a high ball in the whole match. None of our forward players fancied challenging the Beith defence in the air. It's no use pretend jumping for the ball with Lafferty being the worst offender. Johnston and Shelvey were easily taken care of by the full backs. This meant we kept relinquishing possession and the ball was always coming back to our defence time after time putting us under pressure. The defence coped relatively comfortably in the first half.

It was the same ref from Wednesday's game, and normally blaming the ref is just an excuse and you should be looking closer to home. On Wednesday, he booked Dooley after 8 minutes for an innocuous challenge, and then went on to allow a number of much worse fouls from the opposition go unpunished. It is this lack of consistency that angers fans. Today, it was the sending off of Vezza. He may have warranted the card, but it was the blatant shirt pulling on Lafferty in the lead up to it. Had he given the Bankies that free kick then the Vezza incident would never have happened. I always think you can tell when the ref gets it wrong when he tries to balance it up later on. Sure enough, he booked three Beith players in the next eight minutes mainly for nothing incidents. These compensatory bookings do not make up for the sending off.

The sending off led to the Bankies losing their way and Beith were two up within ten minutes. Both goals came from crosses on the left, and were almost identical as Beith had a man extra at the far post. Milliken headed in the first, and the second was nodded back across goal for McPherson to tap in. Thankfully, the Bankies were able to regroup after that and pulled one back when Black lobbed the keeper after a fine through ball by Deas. McAnespie made some risky choices as he tried to rescue a draw, and this almost cost the Bankies as Beith exploited the gaps and missed at least two good chances. The Bankies had a few set pieces late on, but are just lacking a bit against the better sides, and Beith comfortably held on.

So, the Bankies are now the only side without a point and at the moment the worst possible scenario is playing out. I don't think there were any illusions about how hard this was going to be, and I think everyone can see progress is being made at some level. At least ten new players arrived in the close season, and there was just no way they were all going to be successes. It is how we deal with this. How hard it will be to get new players in at this stage, but only if others can be moved on show the task that we face. Unfortunately, this league is very unforgiving with only 22 matches. It can very quickly turn in to a nightmare, and the hard games keep coming. Away to Auchinleck would not be one that would have been marked down at the start of the season as a possible point winner. But that's what's coming next.