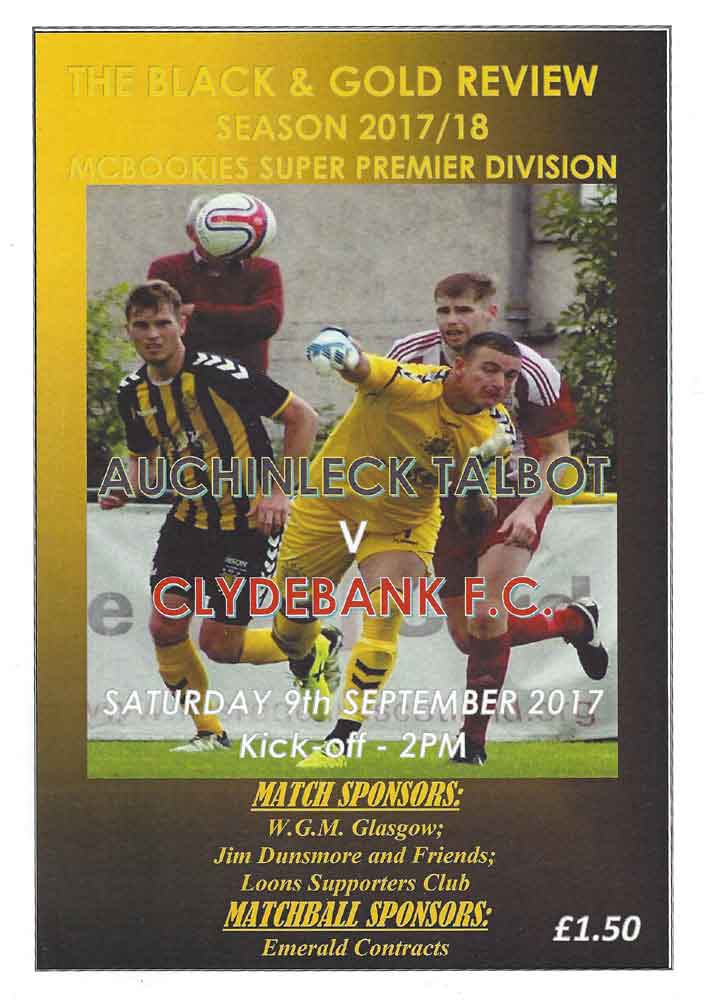 The deficiencies in the Bankies side were truly exposed as Auchinleck smashed in five goals without reply. What was worse is that they hardly broke sweat in doing so. The second half in particular was lamentable, and Kieran McAnespie now has a serious headache in working out how to go forward in this league with the squad as it is.

The goals came just way too easily, and the attack at the other end was non-existent. The opening goal, not for the first time this season, came directly from a broken down Bankies attack. The defence was static as Wilson was played onside by Gow and calmly slotted home. That was after fifteen minutes, and already there was a sinking feeling. In fairness, the Bankies weren't out of the game in the first half, but were always on the back foot against a stronger, bigger and more physical Talbot side. Wilson missed a complete sitter that would have ended the game as a contest towards the end of the half, but he made it up for it three minutes into the second period.

Again, Talbot burst through the centre of the defence, and it looked like Verlaque might give away a penalty. His challenge pushed the ball past Morrison but wide of the goal, however Wilson was on hand to put the ball into the net from a tight angle.

Goal number three was headed home at the far post from a set piece by Hyslop who was allowed to get on the blindside of Gow. The Bankies looked like they had given up at this point and the floodgates could barely contain the Talbot attack.

Two more goals were added by substitute Sean McIlroy. His first was horrible for the defence, and for Vezza in particular as he was turned inside out, before McIlroy smashed it into the net, The fifth, in the last minute, was an utter embarrassment as the Bankies looked more like a boys team, with Pearson abysmally trying to control the ball and losing it, then a long diagonal ball unzipping the defence. A chip across goal allowed McIlroy a tap in from about 6 inches. He could have went down on his hands and knees and headed it in if he wanted to rub it in, so easy was it.

This was always going to one of the toughest tests of the season and so it proved to be. The manner of the defeat is the worrying thing though, as we are now starting to see which players look to be up to the task in this division, and which don't.

I don't want to dwell on it too much, as I'm sure McAnespie is under no illusions about the difficulty of the task he now faces. He did exceptionally well to get an under performing team promoted in the first place. You only have to go back a few short months to see us being comprehensively beaten by the likes of Maryhill and Renfrew. Most promoted teams hang on to their squad and strengthen where necessary, but losing our two best players weakened an already depleted squad. The rebuilding required heading into the Premier League looked like a massive uphill struggle and that is how it is currently panning out.

The problem looking ahead is where we think points might come from. On paper, we have a slightly *less hard* run now, so we need to start picking up points before the rot well and truly sets in.