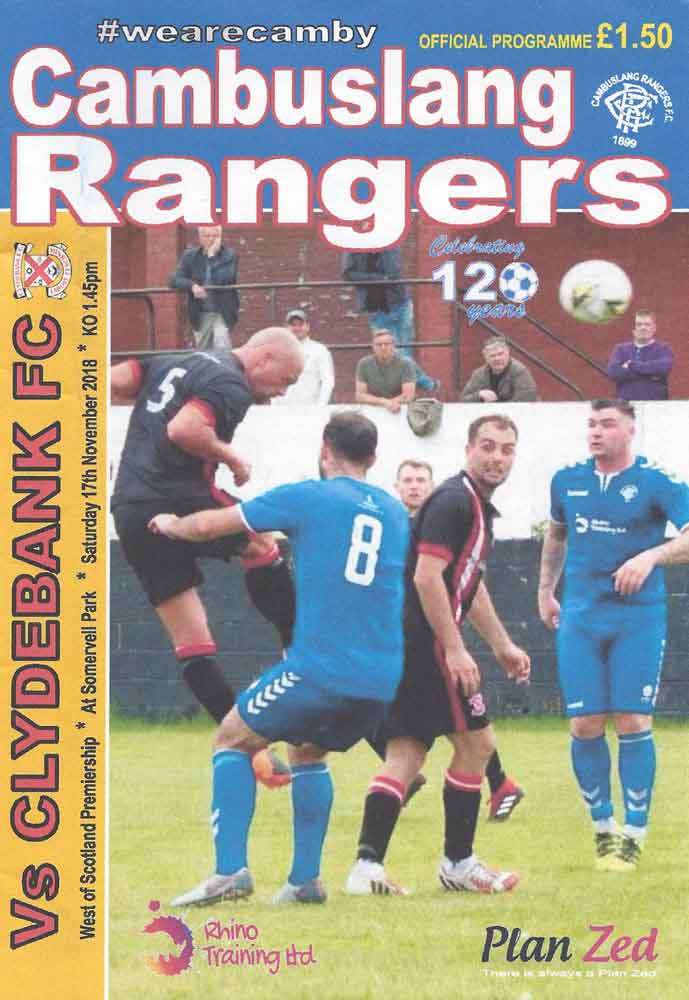 Jordan Shelvey and Stevie Higgins kept up their fine goalscoring form of late by bagging the two goals that gave the Bankies a battling 2-1 victory over Cambuslang Rangers at Somervell Park. In a match that produced eight yellow cards and a red for the home side’s Breslin, Clydebank probably just about shaded it overall and deserved to take the three points home with them.

The team was along more familiar lines after last weeks horror show against Glasgow Perthshire. Vezza returned to the starting line up, as did Asghar, Waters and Cammy McClair. Nicky Little made the bench after recovering from his injury that kept him out of the side for the past few weeks.

The Bankies were quite slow to get started, and Cambuslang took the early initiative, but only had a fierce drive from Galt that was easily handled by Waters to show for their possession.

Slowly but surely the Bankies eased themselves into contention, and were forcing a few mistakes by the home side. It was from one of these that gave the Bankies the lead after 14 minutes. A mis-judged cross-field pass by Gemmell went straight into the path of Del Hepburn in the centre circle. The winger quickly pounced to play a slide-rule pass into the path of Jordan Shelvey who ran clear and slotted the ball past the out rushing Stewart.

Unfortunately the lead only lasted a few minutes when the home side equalised from the penalty spot. A punt up the park into the left hand channel saw Duff get between Darroch and Fitzpatrick. Waters raced from his line, but the Lang forward got his toe on the ball just as the two players collided. John Gemmell stepped up and slammed the ball home to draw the sides level. Incredibly that is the seventh penalty the Bankies have conceded this season.

There wasn’t a lot of goalmouth action after this but Clydebank were looking the more likely side as they looked to regain their advantage. However, it was the home side who could have gone ahead with one of the best moves of the match. Green, Duff and Galt were all involved in a fine move down the left wing. Galt pulled the ball back across the box for the incoming Ramsay, but fortunately he hit his shot too straight and Waters was able to make an important stop.

It was a vital stop as the Bankies regained the lead just three minutes later. Darroch lofted the ball down the right wing. Cammy McClair took the ball out of the air, knocking it past the Cambuslang full back. Stevie Higgins took over from here as he moved into the box towards the goal. Rather than blast the ball, he quite cleverly prodded it low into the unaware goalkeeper’s near post to score his fourth goal in three games.

Cambuslang upped the tempo in the second half and certainly had the Bankies on the back foot for the majority of the time, but goalscoring chances were thin on the ground. It was only once the game entered the last ten minutes or so that opportunities came along for both sides. Cambuslang had their two best chances in quick succession. The first came when Gemmell fed Galt on the right hand side. The wide man quickly drove the ball low across the Bankies box. McRobbie took a touch but just as it looked like he was going to score, the impressive Fitzpatrick bravely blocked the ball. Soon after, the home side were awarded a corner, and from the flag kick Gemmell was given a free header at goal. It was a powerful header and Waters couldn’t hold onto the ball, but luckily Alan Vezza was alert to the danger and belted the ball out of the danger area.

At the other end the Bankies could have tied up the three points as Cambuslang threw men forward. Shelvey chased a ball down the left wing and crossed for McClair at the back post but Stewart turned his shot out for a corner. Then Shelvey was put through as the ball was dinked over the home defence. The Bankies striker took it early as the ball sat up nice for him, but he sent it a foot over the bar.

The match was to end up on a sour note. The home side already had six players booked in the match when Breslin was sent from the field in crazy scenes. The Lang full back pushed Hepburn off the field into the perimeter wall, and the Bankies winger fell back onto the pitch. The red mist descended on Breslin at this point as he stupidly grabbed Hepburn with both hands and dragged him off the pitch. Players from both sides piled into the scene, but the ref quickly got control of the situation. No doubt he could have flashed his card at any number of players but sensibly cautioned the original culprit who had already been booked.

This was another fine result for the Bankies. Cambuslang are a very decent side, and if they could control their aggression into something more fruitful then they could be a force in this league. Clydebank never flowed from an attacking perspective but dug in when they had to. Cambuslang didn’t really create any clear chances in the second half as the Bankies defence showed their resilient side again. Something that would not have happened last season. Best on the field for the Bankies were Declan Fitzpatrick who probably had his best game for the club so far, and Alan Vezza showed how much he was missed last week.