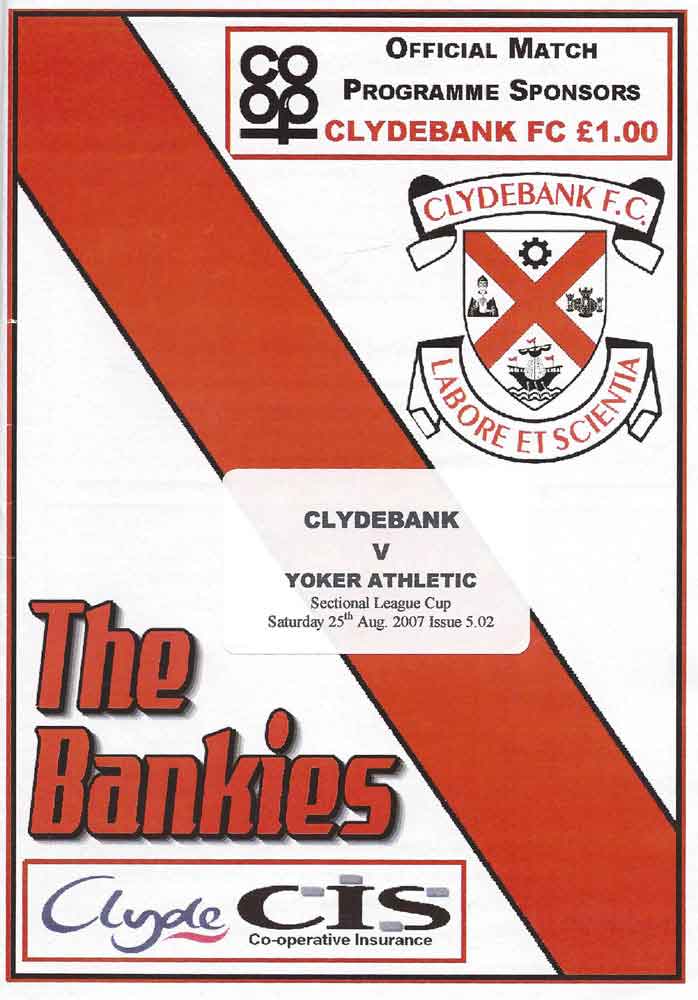 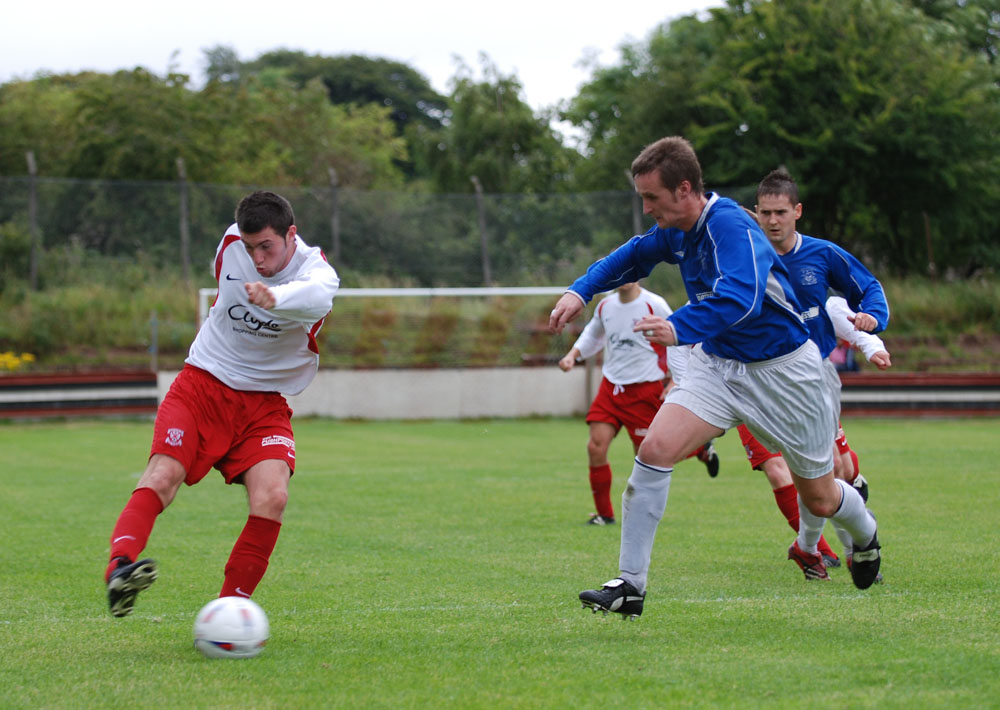 Clydebank coasted to victory against local rivals Yoker Athletic to set up a quarter final cracker against Arthurlie from the Super Premier League.

Clydebank went into this game knowing they had to win by a larger margin than Maryhill to ensure qualification to the Quarter final stage of the Sectional League Cup.

Paul Allum made his first start of the season with James Lennox attending a wedding. Mark Bowie also found himself a place on the bench after his two goals at Neilston earlier in the week.

The opening stages of the match were played in a surprisingly low key manner, with neither team showing the kind of raw emotion that has been evident in past derby clashes. Craig and then Cunningham had early headers at goal that did not worry Meechan in the Yoker goal. Yoker's first real chance being an awkward prod shot from Readie that trickled through to Wilson.

The Bankies did take the lead, however, after 10 minutes following a dreadful defensive error. Ged Hoey was held back midway inside the Yoker half. Alan Jack's free kick into the box appeared to be harmless, but a Yoker defender panickedhis attempt at a clearance. The ball rolled across the six yard box and Paul Craig was in hand to thump it into the net.

The goal gave Clydebank the impetus and opportunities began to arrive. Alan Jack crashed a free kick off the wall, then Carr cut inside from the right, but his left foot shot was weak. On the quarter hour mark, Carr should have increased the advantage. He found himself with time and space in the box, and even though his back was to goal , he will feel he should have done better than blaze the ball over the bar.

Yoker were not giving the Bankies defence too many problems, and Cunningham broke up a rare foray upfield for the Whe-ho. He released Jack, and the swift break ended with Jack trying to lob the keeper from all of 40 yards, but it was wide of the goal. Ged Hoey was putting in another great shift and he had two long range efforts saved by Meechan. The second one being spilled and gathered on the second attempt by the veteran keeper.

Just before the half hour point, Yoker had their best chance of the match. A deflected long range effort came down to Watt whose sweet volley from 18 yards was pushed away by Wilson.

As always happens when a great chance goes a begging, the opposition runs up the park and scores. And the Bankies did precisely that. A poor Yoker free kick was blocked by the wall, and the ball was switched from left to right to Sichi. The winger had men flooding forward in support, but chose to take on the last defender who did well to get the tackle in. Fortunately, the ball was only pushed out as far as Allum who strode into the box and calmly placed the ball into the corner out of Meechan's reach.Yoker tried to up the pace as they felt the game running away from them. Readie wasted a chance when put through, and Cuthbert fired a header wide after a sweeping move. It didn't last and the Bankies went in at half time two goals to the good.

Within two minutes of the restart the game was over. Ged Hoey added the third, unleashing a curling shot into the net, after a neat one two with Kenna.

The margin of victory was vital for progression in the tournament, so Clydebank came forward to try and add to their tally. An Alan Jack cross was nearly headed into his own net by Japp, then Paul Craig spun his man and cracked in a shot from a tight angle that the keeper dealt with.

Yoker were lacking the fight they are reknowned for, but Cuthbert did find his way into the ref's book for a petulant foul on Sichi. From the Free kick, Hoey hit a high shot that Meechan could only parry away. Immediately, Yoker had a chance to get back in the game when the ever dangerous Watt played in a dangerous ball that got beyond Wilson. Martin McInnes was on hand, however with a great diving header to clear.

Alan Jack was taunting the Yoker defence, and Barrie earned himself a yellow card by having a kick at the midfielder as he led him on a merry dance.

With 20 minutes remaining, Jack and Carr were replaced with Bowie and Docherty. Soon after, Yoker came as close to scoring as they did all day when Cuthbert played a one two out on the right wing. His deep looping cross sailed over Wilson's head but crashed off the bar.

Mark Bowie had the chance to make an early impression after his introduction, He chose the wrong option however, when he fired a fierce shot into the side netting instead of playing to Andy Kenna who was in acres of space.

Duncan replaced Craig on 77 minutes and immediately fired in a dangerous low cross that had no takers. A final flurry of chances could not produce another goal. Cunningham got on the end of a short corner from Lappin and Allum, but his shot went over. Then down the other end, Readie had a chance from only a few feet out, but he sliced his shot when it looked easier to score. Finally, Scott McKay made a terrible error in his own six yard box. He seemed to get caught in two minds, and only succeeded in setting up Sichi. Unfortunately, the shot went over the top under pressure from McKay and Meechan.

With the result going favourably with Maryhill, the Bankies progress to the next round. A hugely satisfying victory achieved without ever getting into top gear. For a team with a better than most record against the Bankies, Yoker were strangely absent. However, the game still had to be won and now the Bankies can look forward to an enticing match against Arthurlie in the next round.