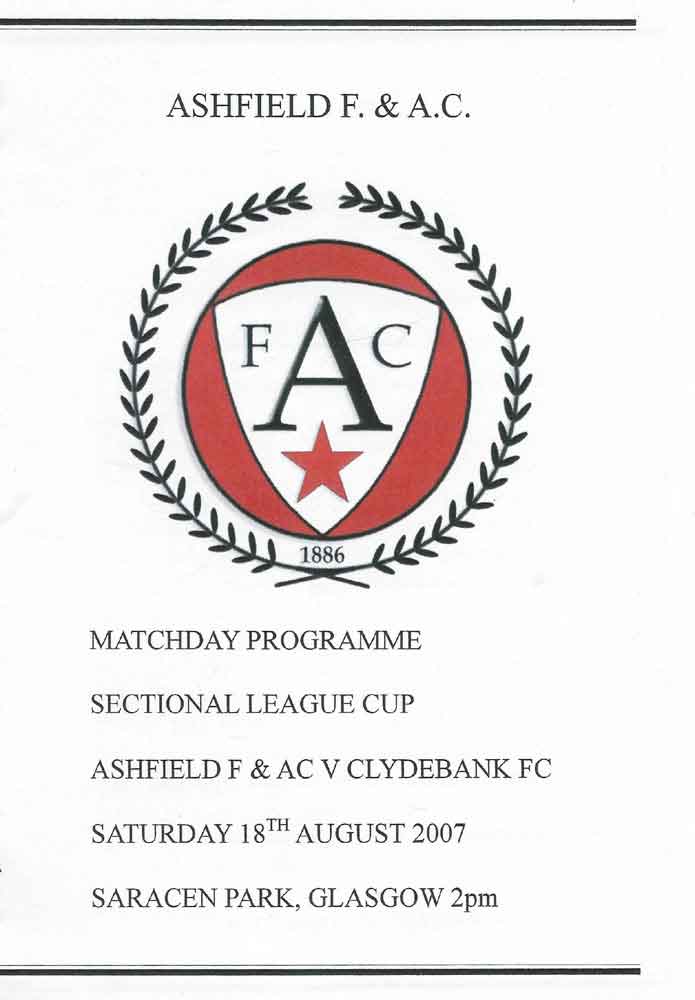 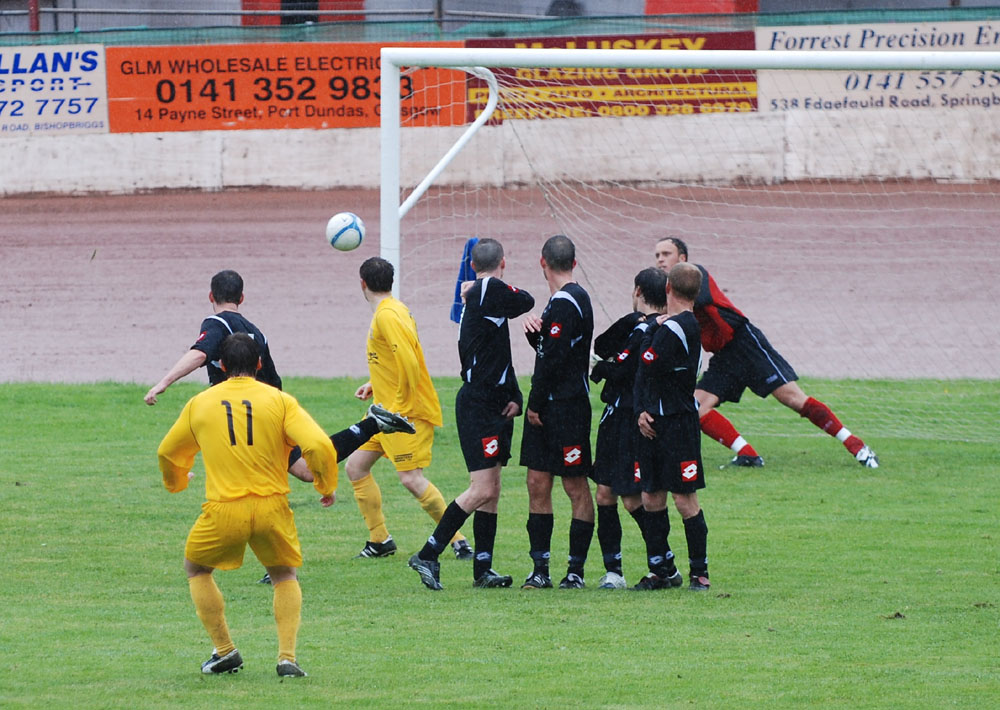 Clydebank kept their hopes alive of qualifying for the Quarter Final draw of the Sectional League Cup with victory over ten man Ashfield.

Budgie McGhie made several changes to the line up for today's game, which was played in torrential rain from start to finish. Colin Sutherland and Davie Carr were restored to the starting eleven, with keeper Chris Prior dropping out in favour of a trialist.

The opening exchanges in the match were fairly muted as both teams tried to get to grips with the weather and slippy pitch. A McInnes long range effort and a Craig header that skidded away were all the Bankies had to show in the first ten minutes. Ashfield showed they could be a danger too, when a last ditch tackle from Lennox prevented a scoring opportunity for the homesters.

Chances were few and far between as the narrow park and poor weather were making it difficult for the forwards to make any headway. Though, Carr did show some nice skill beating his man on the left and firing in a cross that the keeper did well to intercept.

Ashfield were lively up front and they should have taken the lead after 20 minutes with a double chance. Ex-Bankie Michael Tolland nicely cut the ball back, but the incoming forward couldn't get the whole of his foot on the ball and it sliced wide. The ball was fired in again but the shot was high and wide of the Bankies goal.
The Bankies knew they were in a game, and started to up the pace. Jack had a free kick deflect off the wall, and then a long Sutherland ball was controlled neatly by Carr. The striker saw the keeper was off his line, but just couldn't dig the ball out from under his feet to lift it overThe Ashfield No1's head.

On the half hour, striker Paul Craig had a 25 yard shot turned round the post. From the resultant corner Cunningham headed just over from close range. This was Clydebank's best chance of the match, so far.

The slippy pitch made mistakes inevitable, and it nearly cost the Bankies the lead. The ball evaded Colin Sutherland, putting an Ashfield forward through on goal. Bankies trialist keeper raced into action, and saved well with his feet.

The Bankies wasted no time, and were immediately up the other end. a great McInnes cross was met with a scissors volley kick from Hailstones, however the keeper got down well and made a save on his right hand side.

The remaining goalmouth action in the first half was in the Ashfield penalty box. A Cunningham header, from a Jack free kick, skidded off his head and over. Then, a deep corner to the back post was met by the head of Sichi only a few yards out. It looked like the winger should have tried to score, but instead headed it back across goal. Only the heroics of an Ashfield defender who dived in front of the ball prevented Andy Kenna from forcing the ball into the net.

Ashfield had acquitted themselves well in the first half, but the Bankies began to lay siege on the home goal as the second period got under away. Davie Carr beat the offside trap and laid the ball off to Kenna. The midfielder's shot being well saved by the keepers feet. Ashfield's keeper was having an inspired afternoon, no more evident than the save he made from a scorching James Lennox 25 yarder that was heading for the postage stamp.

Paul Craig was next to get himself into a goalscoring position. Hailstones found him with a neat through ball, but the striker failed to direct his shot on target after trying to round the keeper. Craig then turned provider, when his deep cross to the right found Sichi about 8 yards out on the angle. The winger controlled well with his chest, but sent his shot over the bar.

Ashfield still looked dangerous on the break, but it was the Bankies creating the chances. A fantastic Alan Jack ball putting Carr clear on the left hand side. The striker tried to lift the ball over the keeper, but again the Ashfield stopper did well to parry the ball over the bar.

The Bankies didn't seem to learn their lesson from Maryhill on Wednesday night. If you don't take your chances you will be punished, and Ashfield proceeded to take the lead. Clydebank's trialist keeper couldn't hold on to a cross ball, and it dropped at Ashfield striker, Thompson's feet. He sclaffed a shot from close range that went over the line despite McInnes' best efforts to block.

Within seconds, it could have been two as an unbelievable shot from easily 70-80 yards nearly caught out the Bankies keeper, just bouncing wide of the goal. The Bankies continued to make chances with Carr shooting straight at the keeper from 20 yards and a Cunningham header going just over.

It seemed the Bankies need a bit of good fortune. and Lady luck arrived at just the right time. Hailstones sent over a cross to the right hand side to Sichi. The winger was just getting beyond the defender when he appeared to be pulled back. It was a soft decision, but one Clydebank were only to happy to receive. Alan Jack took a two step run up, and sent in a perfect penalty that was so good, the keeper couldn't even move. Ashfield were dismayed with this decision and two ordering off were dished out by the ref. Garscadden was giving his marching orders for dissent and then one of the back room staff was dismissed for a similar offence.

With twenty minutes remaining the Bankies made a double substitution to try and get the winning goal, with Fisher and Lappin replacing Sichi and Hailstones. Fisher was involved straight away. His pass found Jack who spun and sent a first time pass to Carr on the right. The striker headed toward goal and sent an angled drive just inches wide of the post.

Despite the extra man, Clydebank were struggling and the game went flat for about ten minutes. Ashfield were not helping matters by some poor time wasting tactics. With time running out, it was Ashfield who had the chance to win the match. The nippy striker getting beyond the Bankies defence on the right hand side. He sent in a cross that should have been blasted in from six yards, but a poor connection allowed the ball to be cleared.

This sprung the match back to life, and Andy Kenna had a chance created after good combination work between Fisher and Carr. The ball was sent across to Kenna but he couldn't hit the target. With the game stretching Ashfield got beyond the Bankies defence again. A long ball went over Lennox's head, but the shot was blocked well by Bankies trialist keeper.

Bankies manager, Budgie McGhie, threw on Duncan for Cunningham to try and get the winning goal, and it came minutes from the end. Fisher fed McInnes, and the defender sent a lovely ball to Davie Carr. With a bit of work still to do, Carr cut inside from the left hand side and sent in a low shot to the keeper's near post. The keeper who had been superb all day, got both hands to the ball, but allowed it to escape his grasp and into the net.

Clydebank deserved this victory in the end, and it must be pleasing to Budgie McGhie that so many chances are being created. However, the wastefulness in front of goal has very nearly been the Bankies undoing in the last two games. If these opportunities can be turned into goals, then the club should be capable of making a promotion challenge this season.