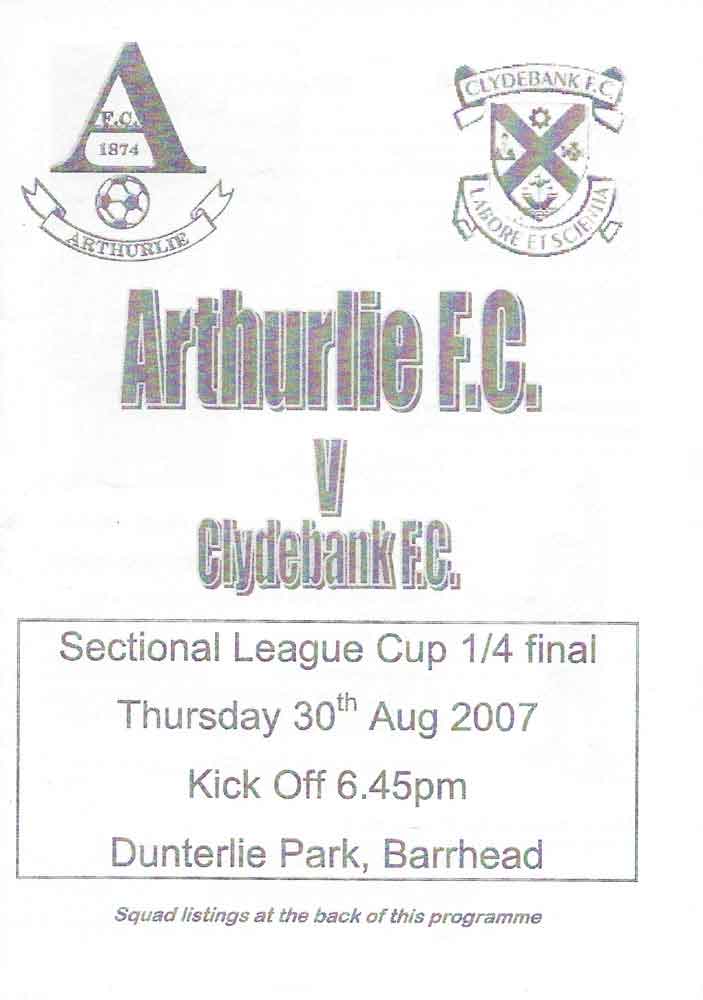 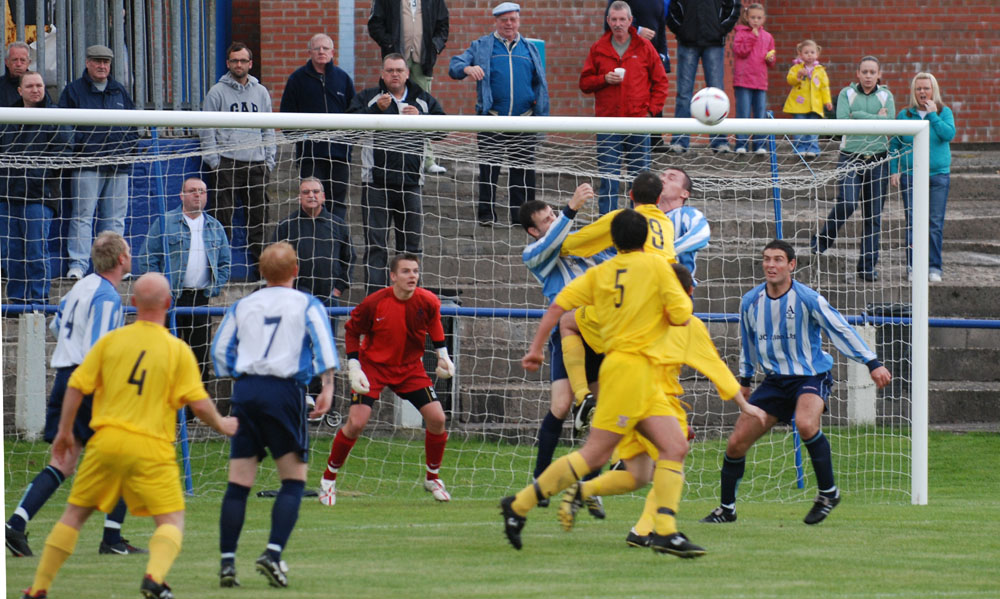 Clydebank crashed out of the Sectional League cup after a disappointing performance. Early errors allowed Arthurlie to take control of the match, and the Bankies left themselves with a mountain to climb, that was just too high this time.

James Lennox was available again, but Allum was preferred in the right back starting slot. With an abundance of midfielders to choose from, Gordon Lappin found himself playing in the centre of defence, and David Fisher came in for his first start.

Arthurlie were out of the traps fast and with a pacy three pronged attack, they looked to put the Bankies on the back foot fom the off. A header that went just wide from Malcolm was a taste of what was to come

When playing higher league opposition it is important not to concede early on, but the Bankies contrived to do this within 5 minutes. A near post corner was swung in, and despite there being a plethora of defenders on hand, Bradford stole in and headed home from about a foot out.

After the early shock, the Bankies started to come into the game and Paul Craig came close with a header, however Arthurlie were making great use of the long ball with their fast wide men getting beyond the Bankies defence. An example being on 11 minutes, when a ball through on the right was fizzed across the 6 yard box, and three players slid in, but the ball was just beyond them.

Bradford skied a shot over for Arthurlie, and then the Bankies made progress down the left with McInnes finding Carr who cut inside and fired a shot wide that the keeper looked to have covered.

Then after 15 minutes disaster struck. A slide rule pass found McFadden on the left. He showed great pace to beat Lappin and cut the ball back. It appeared to be mishit but somehow managed to evade Wilson and McInnes, to leave an easy tap in for Bradford to make it two nil.

The Bankies now had a mountain to climb and the rest of the first half was marked by the Bankies enjoying quite a bit of possession, but not being able to penetrate the Arthurlie back line. While the Barrhead men were content to pick off the Bankies defence with their pace

Clydebank mainly had long range efforts, with Hoey and Jack firing off target. Paul Craig had two headed attempts, the second at the back post should have been converted. The closest the Bankies came was a brave diving header by Andy Kenna that Carr almost got on the end of. The Arthurlie keeper being alert to dive at the striker's feet to touch it away

Arthurlie could also have increased their lead before the break. In particular, a back post cross that was met on the volley by Ballantyne, which should have been buried, but was cushioned into the side netting.

Clydebank needed an early goal in the second period to give themselves any chance of retrieving the situation, but found themselves on the defence again. A header going just wide of Wilson's goal. The Bankies were about to make a change, when the match was put out of reach. A mis-hit shot falling nicely to Malcolm to divert into the net from close range. The Bankies support howled for offside, but the players didn't seem to protest too much

The changes were duly made with Lennox and Bowie replacing Jack and Craig. David Carr nearly pulled one back straight from the kick off, fizzing a shot past the far post.

Both teams traded wild shots over the bar, before Kenna made way for Docherty. This allowed Lappin to move into his customary midfield position.

The Bankies tries manfully to get a goal back, but lacked the cutting edge on the night and Arthurlie felt comfortable enough to remove two of their front men and revert to a 4-4-2.

Both teams had further chances, but Arthurlie had the better of those and in the end ran out deserving winners

After a decent run of form, the Bankies were brought back down to earth. Qualification from the section must be seen as a minimum and this was achieved. Arthurlie proved too difficult a hurdle to overcome at this stage of the season, but this may be the shot in the arm team need for the upcoming league campaign starting at Largs on Saturday.