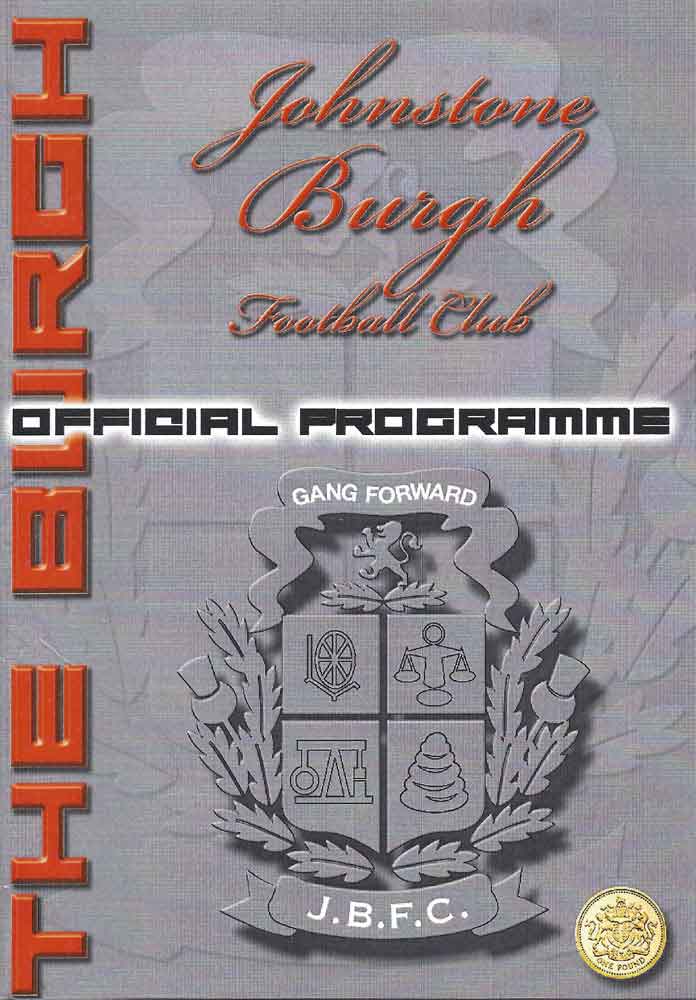 Alan Jack rescued a point for the Bankies with his second half strike, in a hard fought encounter against Johnstone Burgh at Keanie Park. Both sides finished with ten men and a further eleven were booked in a match, although keenly contested, was never dirty.

Chris wilson was back between the sticks for Bankies third away league game on the trot, and Mark Hailstones made his first League start of the season.

Keanie park was in great condition, however the swirling wind would make it a difficult proposition for both sets of players. Burgh had the wind at their back in the first half and were first to adapt. Their long ball game suiting the blustery conditions. Ferriss found himself free on the right hand side, however his attempted lob was stopped one handed by Wilson.

Clydebank's first shot at goal came from Alan Jack. A free kick that sailed wildly over the bar. Jack was involved again moments later when he picked up a loose ball and opted to shoot from fully 30 yards. Again, as was to be a feature of the game, the midfielders shot was well over the top

Burgh had a double chance to take the lead after ten minutes. Poor marking allowed Brolly a free shot on goal, however Wilson saved well. The striker had another bite at the cherry from the rebound, but fired over.

Hailstones had the ball in the net after a quarter of an hour, but the ref harshly adjudged Paul Craig's challenge on Donny in the Burgh goal as a foul. Lennox was the first of many to be booked, and was quickly followed by Niscanci.

Clydebank had a good ten minute spell of pressure with several chances created. Lennox got on the end of a fine Lappin cross, but his header was off target. Lennox then turned provider, whipping a cross into the box that found Carr, but the striker who was at full stretch could only direct the ball straight at Donny.

As the Bankies searched for the opening goal, further goalscoring opportunities came to Jack, Carr, and Hailstones but they were unable to convert any of the chances that came their way

The Bankies were to rue these misses as Burgh took the lead on twenty eight minutes. For the second time in two matches, the Bankies defence were caught out by a long ball. And, with Wilson in no mans land Brolly had an easy task to knock it past the keeper and into the net.

Niscanci was substituted for the homesters after two poor challenges. The midfielder's earlier booking looked likely to turn red before the Burgh bench took action. The game became bogged down in the lead up to the break and only a Jack shot that went wide, after a neat one two with Kenna and a header flashed wide by Brolly were the only chances of note.

The Bankies came out in determined mood for the second period and immediately had Burgh on the back foot.Lennox played in Carr on the edge of the box and the striker turned and shot smartly with his left foot, however the ball went narrowly wide.

Hailstones then shot over before Davie Carr cut inside brilliantly, leaving three men in his wake, but his shot deflected wide for a corner. Carr, again, was on the end of the flag kick but his header hit a defender. All this within the opening five minutes, and a penalty claim waved away by the ref as the crowd shouted for handball

Johnstone Burgh were still a threat on the break, as another Brolly header went just wide. The Bankies made two changes that surprised many, as Lennox and Sutherland were withdrawn for Allum and Soutar. However, within a minute the Bankies were on terms. Paul Craig turned his marker superbly on the left hand side, and fired in a low cross that found Alan Jack on his own. Showing great composure, he calmly slotted the ball into the corner of the net.

After the goal, the Bankies failed to capitalise on their early good work, and with their boisterous style, Burgh force their way back into the match. The game became scrappy with only half chances being created on both sides.

Brolly had a glorious chance to give burgh the lead with only 12 minutes remaining. The big striker turned a free header past the post from only six yards with the goal gaping.

The referee had been card happy all day, and it was no surprise when he produced not one, but two reds. A throw in down the right flank led to a tussle between Lappin and Armour. It seemed innocuous enough, but the ref instantly waved red cards at both players. Neither player complained, which suggested the ref had got it right.

The home side could have claimed all three points right at the death when an unbelievable stramash in the Bankies six yard box saw the ball fly over the bar,when it seemed certain a goal would be scored. The game ended with Paul Craig receiving his obligatory yellow card.

A draw was probably a fair result in the end. Burgh won't give away too many points at Keanie park with their physical presence and direct style of play. All in all, The Bankies have got to be happy with 5 points from their opening 3 away games in the Super League. The challenges are undoubtedly tougher, however the players have looked up to the task.