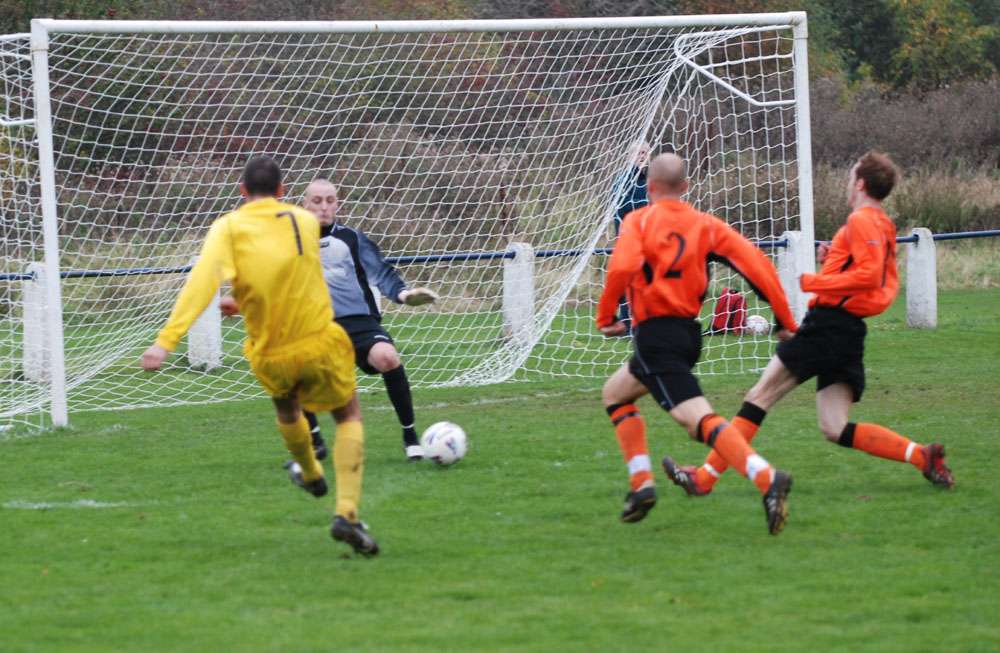 The Bankies visited Tilework Park for the first time since our inaugural season in the Juniors for the West of Scotland Cup first round match against Stonehouse Violet. Despite the district side performing well in the early part of the season, Clydebank marched into the second round with a comprehensive victory.

Bankies gaffer Budgie McGhie shuffled the pack again making five changes from the previous week with Jack on holiday and Fisher injured. Friel, Lennox, Hoey, Craig and Sichi all coming in to the starting line up.

Clydebank exerted some pressure on the Violet goal early on as they looked to put their lower league opponents in their place. James Lennox had a near post header turned round the post by the Violet keeper, and McInnes saw his effort touched away a minute later after fine play from Carr and Lappin.

Stonehouse were determined not to be making up the numbers, and were soon carving out openings for themselves. On eight minutes, a close range volley was magnificently tipped over the bar by Gonet. The homesters came close again when poor marking at the back allowed a shot to be fired in that gonet was relieved to see hit his side netting.
The game had a real cup tie feel about it, and Lennox came close again with another header after Carr and Lappin combined again on the right hand flank. From the corner that followed, Carr had a chance from sixteen yards but hit his shot into the ground, and the ball was easily claimed by the keeper.

Stonehouse took the lead after 21 minutes with as good a goal as you are likely to see. A half cleared effort, saw the ball fall kindly to Moore, who cracked in an unstoppable shot into the top corner with the outside of his right boot.

History shows that it is vital for a lower league team to consolidate after taking the lead in a cup tie. As is so often the case, this fails to happen, and the Bankies were back on terms within five minutes. A neat lay off by Cunningham let McInnes through, and Shannon tripped the defender for a clear penalty.

Carr's spot kick was well saved by the Violet keeper, however the ball spun up kindly and the striker buried it at the second attempt with the stopper helpless on the ground.

This signalled the end of Stonehouse's involvement as an attacking force as the Bankies took the game by the scruff of the neck. Paul Craig put the Bankies in the lead after 34 minutes with a fine turn and shot from twenty yards.

As Violet sensed the game slipping away their tackling became somewhat more boisterous, with their winger being the first in the book after whipping away Paul Craig's legs.

Before the break it was game, set and match as James Lennox finished off a fine passing move that involved half the team to give the Bankies utility man his first competitive goal for the club.

Stonehouse had the first attempt of the second period with a 35 yard strike that wasn't too far away, however the game soon reverted to Clydebank dominating the play

Openings were coming thick and fast as Lennox had a shot charged down, then Craig saw a shot go narrowly past and Lee Sichi missing a glorious opportunity after breaking the offside trap

The home side couldn't hold out and the lead was increased after 56 minutes. Davie Carr threaded a fine pass through to Paul Craig who took one touch and drilled a left footed shot just inside the post to make it 4-1.

When the Bankies came through the District Leagues, they often found that teams would resort to bully boy tactics when the game was lost, and Stonehouse were proving this theory with some nasty challenges, especially against front pairing of Carr and Craig

It was from one of these challenges on the edge of box that gave the Bankies goal number five. Gordon Lappin proved last weeks free kick at East Kilbride was no fluke by despatching the ball beautifully into the top corner giving the keeper no chance

As the Bankies threatened to run up a huge scoreline, Stonehouse, who had played some nice football at times, let themselves down with some atrocious tackling. The right back was booked after a shocking tackle that saw Ged Hoey cautioned as well, after other players became involved in the fracas.

Budgie McGhie made several changes, and this broke up the flow a little as Stonehouse created a couple of half chances, however normal service was resumed soon after when Lennox fired over from close range after Lappin and sub Hailstones cut through the Violet backline

With 5 minutes remaining both sides were reduced to ten men, when Shannon took out Carr from behind with a discraceful challenge. It takes a lot to rile the Bankies frontman and he will be disappointed with himself as he reacted to this assault by pushing Shannon to the ground. The ref gave Shannon a straight red, despite an earlier yellow, and Carr was also sent off for his retaliation.

The remaining minutes saw a goal for both sides from the penalty spot. Hailstones was tripped in the box and Lappin made no mistake from the penalty mark, and Violet also scored their spot kick after the ref saw John Cunningham apparently have a pull on a jersey.

Budgie McGhie will be pleased with an easy win and with the amount of goals being scored. However, the defence has been leaking a few at the other end and discipline is also a concern. Confidence is high, and with only one defeat in competitive matches this season, the scene is now set for the clash with rivals Rob Roy next week in what is undoubtedly the biggest match of the season for both clubs.