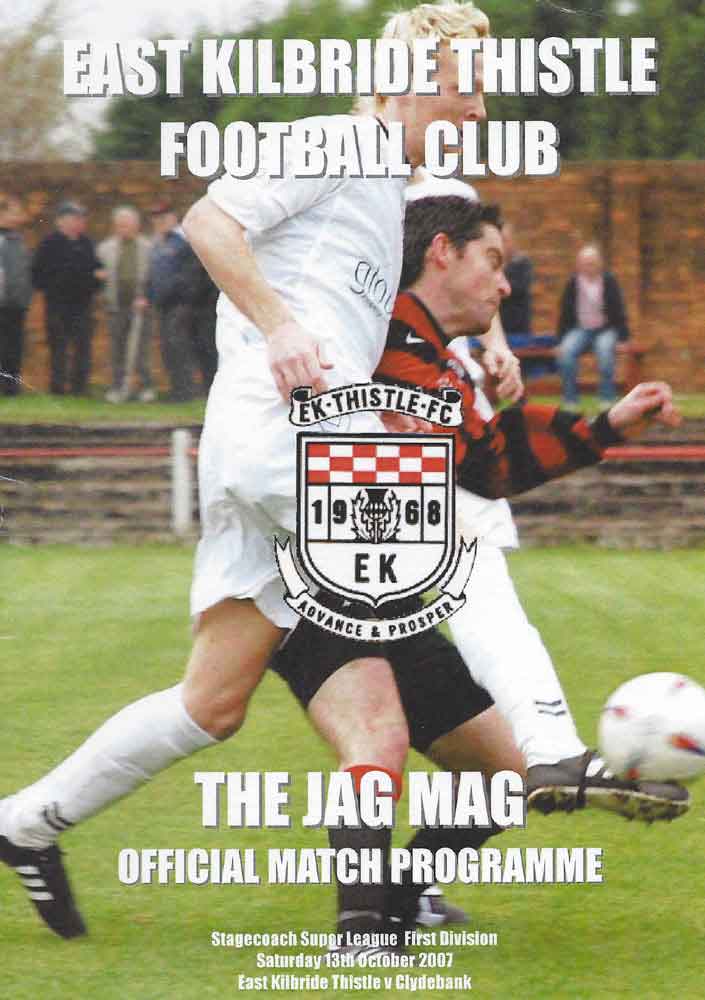 Clydebank retrieved a two goal deficit to grab a deserved draw in a thrilling match against East Kilbride Thistle at the Show Park. Despite finishing the match, yet again, with ten men The Bankies continued their unbeaten start to the League campaign.

Scott Friel missed out with a knock, but captain Gordon Lappin returned to the starting line up with Ged Hoey dropping to the bench.

There have been a number of early goals in Clydebank's matched this season and this was to be no different as Thistle scored in the opening minute. Paul Woods made space for himself and shot weakly from 18 yards out, however Steven McClung raced in at the near post to deflect the ball high into the net beyond Gonet to give the Bankies the worst possible start.

Thistle continued to dominate early on as the Bankies seemed shocked with the early goal, with Strain firing in a shot that was deflected away by Cunningham.

However, the Bankies gradually began to drag themselves into it, as Gordon Lappin forced a defender to block his shot after Davie Carr crossed from the left.

The surface was bumpy, but Clydebank were still trying to play their passing game and it nearly brought an equaliser as Jack set up Lappin for a 25 yard scorcher that had the keeper diving full length to tip over the bar.

The Bankies struggled defensively all afternoon and a mix up indirectly led to East Kilbride doubling their lead after 20 minutes. Fisher and Gonet left the ball to each other and allowed McClung to nip in, forcing Gonet to pull the striker down and receiving a yellow card in the process. McCrae laid off the free kick to Cunning whose shot deflected behind. From the resulting corner swung in from the right hand side Andrew Ward powered a near post header into the net.

It was a real body blow going two down, as the Bankies had just enjoyed their best spell of pressure beforehand, and they needed to get back into the game quickly. Up stepped Alan Jack. Davie Carr held the ball well at the right hand touchline, and turned the ball back to Jack 15 yards out. The in form midfielder placed the ball with great precision into the corner of the net to give the Bankies a lifeline.

The game had a real cup tie feel about it now as the action swung from end to end. Thistle's defence looked nervy as the Bankies searched for the equaliser, but the final pass wasn't there.

however it was East Kilbride who could have extended their lead after 32 minutes. Thistle almost constantly thumped the ball into the channels for their wide men to chase and Clydebank weren't defending it very well as another ball sent Strain clear. Gonet had to be alert to hold the wingers shot.

Just before the break, the Bankies suffered another blow as David Fisher, had to be replaced by Lee Sichi after a cynical tackle from behind by Roome.

Bankies manager Budgie McGhie must have been livid with the defending in the first half, but his half time talk appeared to have gone unheeded as East Kilbride carved out a gilt edged chance within minutes of the restart. Woods played a neat one two and bearing down on goal slid the ball past the post to let the Bankies off the hook

Thistle were bossing the midfield at this stage as Clydebank were struggling to get a foothold in the game, and there seemed to be no way back for the Bankies when the home side regained their two goal advantage after 59 minutes. A long ball down the left channel flew over the poorly positioned Paul Allum's head and sent McClung clear on the left. Incredibly, the entire Bankies defence was posted missing as he crossed the ball to McCrae who had all the time in the world to slot the ball past gonet to make it 3-1.

With the two goal cushion restored Thistle sat back a little and allowed Clydebank to gain the upper hand in midfield, but the visitors were only able to create half chances with Sichi and Lappin almost getting on the end of crosses.

Inspiration was clearly needed, and Alan Jack supplied it. Picking up the ball 25 yards out from a Carr lay off, Jack took two steps and rifled an unstoppable shot into the postage stamp to put the Bankes back in the frame

Paul Craig replaced Davie Carr and found his way into the refs book in less than a minute. THe striker turned his man superbly and the whistler unbelievably adjudged Craig to have used his elbow against his marker. Craig shrugged off this set back and raced off down the left wing and sent in a fine cross that Andy Kenna just couldn't convert.

The tide had turned and Lee Sichi was brought down at least a foot inside the box, but the ref's performance began to unravel in front of the spectators, as he gave a free kick outside the area. Lappin was booked for protesting.

Alan Jack was to take the free kick and his effort was blocked by McClung, but fortunately for the Bankies the Thistle front man was booked for encroachment. Lappin stepped up this time, and he calmly curled the ball round the wall and into the keeper's bottom left hand corner to complete the comeback.

The last fifteen minutes saw the ref discover his red card, and he was determined to use it. First to go was Thistle's McCrae about twenty seconds after he had been subbed. This incensed the Thistle bench and a further altercation between the homesters coach and the linesman saw a further red card being produced.

With ten minutes remaining the bankies were reduced to ten men as Soutar saw red. A gap that you could have driven a truck through appeared in Bankies rearguard, allowing a Thistle striker a clear run in on goal. Soutar took the striker out and received his second red card in consecutive games. A lengthy suspension lies ahead. East Kilbride were unable to trouble the Bankies goal from the resulting free kick

Lennox replaced Kenna as the Bankies closed ranks in the closing stages. Incredibly, the Bankies could have nicked it in the third minute of injury time as Alan Jack weaved a path though the Thistle defence. He tried a delicate little chip that caught out Winter in the thistle goal, but the ball agonisingly passed the wrong side of the post.

This was a hugely entertaining game that saw the Bankies stage a fine comeback. Defensively, Budgie McGhie will be reviewing options as 8 goals have now been shipped in three matches. Also, five straight red cards this season is a cause for concern. On a positive side, the spirit in the side is evident and with four unbeaten away games under the belt there is now a solid base to build a challenge for one of the top three positions.