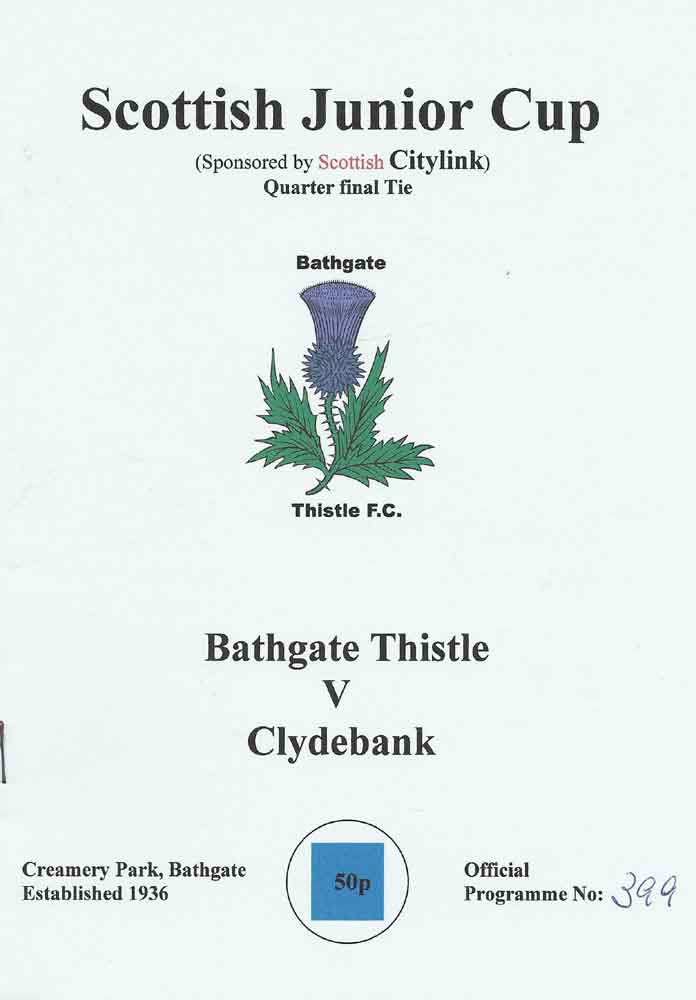 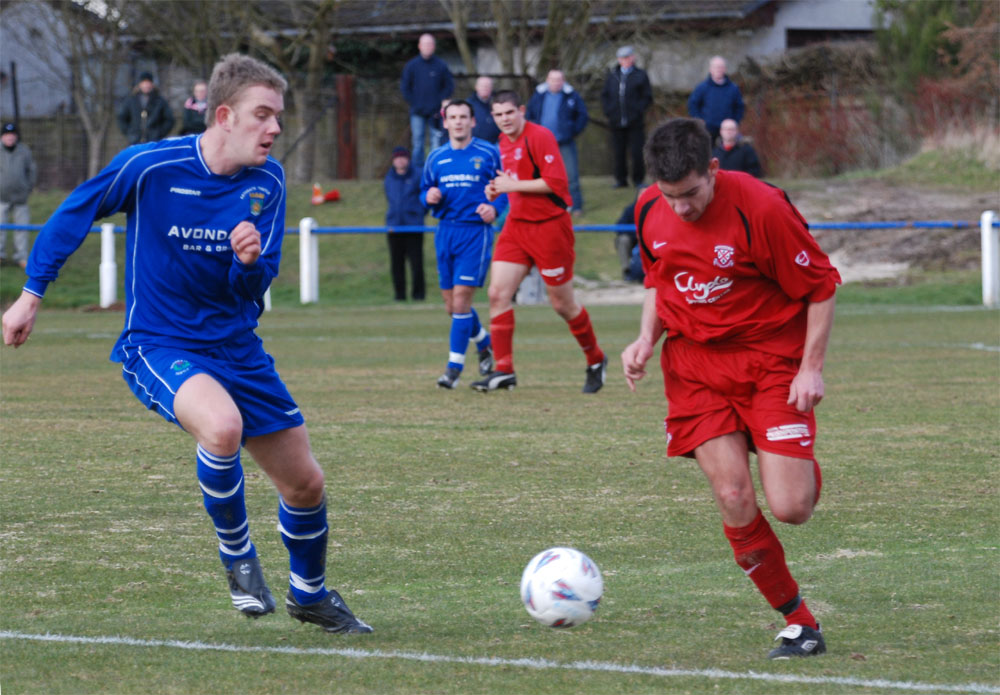 Still in the Scottish cup, but only just, as Clydebank came away from Bathgate with a very creditable and hard earned draw. The Bankies faced top level opposition for the third match in a row and remain unbeaten and now have a great chance to progress in next week's replay.

Hundreds of fans made the journey from the town to see the club in the Scottish cup quarter finals for the second time in three years. However, they were to be greeted with bad news as Star players Alan Jack and John Cunningham both missed out through injury.

Yet again, another month has passed since the team have seen competitive action, and it would take a great effort to take anything from the match against a Bathgate side full of ex-senior players.

The Bankies had a breeze behind them as they kicked off and the match opened at a frantic pace with very little flowing football in evidence. This was the tone for much of the first period.

Clydebank made the first opening after three minutes when Craig and Bowie combined on the left wing, with the latter slipping the ball to Lappin who fired in a shot that the keeper saved comfortably. Down at the other end Smith tried a toe poke volley from the edge of the box, but was well off the target

Both sides were struggling to put any coherent moves together, and the next chance came from a Bathgate set piece with Hunter heading tamely at Corr from a Neill free kick. With several over sized human beings in their side this was always going to be a challenge for the Bankies defence to cope with.

On the 13th minute, the Bankies took the lead with a special goal. Bathgate gave the ball away cheaply deep inside their own half, and Lennox looked up and flighted in a perfect cross to Mark Hailstones who headed the ball equally perfectly into the top corner of the net. Carlin could only stand and watch as the ball sailed past him, as the away support went wild in the stand

This goal failed to ignite the game, and it took another ten minutes for another chance to materialise, and it was nearly a self inflicted wound as Barry John Corr fumbled a bread and butter cross. An almighty scramble ensued before Sutherland managed to clear the ball to safety.

After half an hour a mis-directed Allum cross had Carlin back pedalling, but he managed to clutch the ball to keep the score at one nil.

The Bankies lack of action in the past three months started to show as a little bit of tiredness set in. Bathgate ended the half strongly with Docherty having a shot charged down after making some space for himself.

The same player sent in a deep cross that was nodded down by Harvey into the path of Wilson who crashed his shot wide of the post. A minute later McGrillen had the ball in the net, but the linesman had flagged for offside long before he put the ball away.

The home side upped the ante in the second half and immediately started to carve out opportunities. McFadyen had a tame header saved after 49 minutes from another set piece, and a second cross whizzed by with no takers a minute later

Clydebank were defending deeper and deeper and Allum had to be alert to head clear from another dangerous cross ball.

The Bankies finally came close after 56 minutes when a Lappin free kick was nodded in front of goal by Paul Craig. With the goal at his mercy Bowie blasted wide, however the strikers blushes were spared by the Linesman's offside flag.

The pressure was mounting as Harvey sent his free kick into outer space with a wild free kick. After an hour, Bankies Gaffer decided to try and relieve the pressure by making a change. The injured Bowie making way for Brian Miller

Within a minute the games most contentious moment arrived when Paul McGrillen threw himself to the ground after Corr challenged the striker in the box. It looked as though the referee had given the spot kick before the linesman came to the aid of the Bankies and rightly said it was a dive. McGrillen was booked for the offence.

Bathgate continued to drive forward, and Harvey volleyed a shot straight at Corr. Moments later the Bankies defence was split apart as McGrillen was one on one with Corr. A goal seemed certain, but the striker dithered and Jerry Packham made an outstanding blocking tackle as the ball squirmed to safety.

Clydebank made two further changes to try and stem the flow with Fisher and Proctor replacing Craig and Soutar. However, with 15 minutes remaining Bathgate got their reward.

Not surprisingly, it came from a set piece. A left footed corner was whipped into the six yard box, and the strength of McFadyen was too much as he held off his marker and stooped to nod home from a couple of feet.

It seemed the roof may well cave in at this point, but the Bankies showed great resilliance and actually ended the match the stronger side.

With 8 minutes remaining Proctor was played into a shooting position by Lappin, but his shot was blocked and the ball trickled through to Carlin

Brian Miller was starting to impose himself and impressed again with a great run down the right wing. He cut the ball back to Fisher, but his right footed shot was weak and it was gathered comfortably by Carlin.The ref added two extra minutes before blowing for full time meaning both sides will have to do it again next week.
Considering the lack of action (this was only the Bankies 4th match this year) it was a brave performance to earn at draw at Creamery Park. The replay is still a daunting task against one of Junior football's top sides, however with the backing of a huge support and a great home record there is every hope of success.