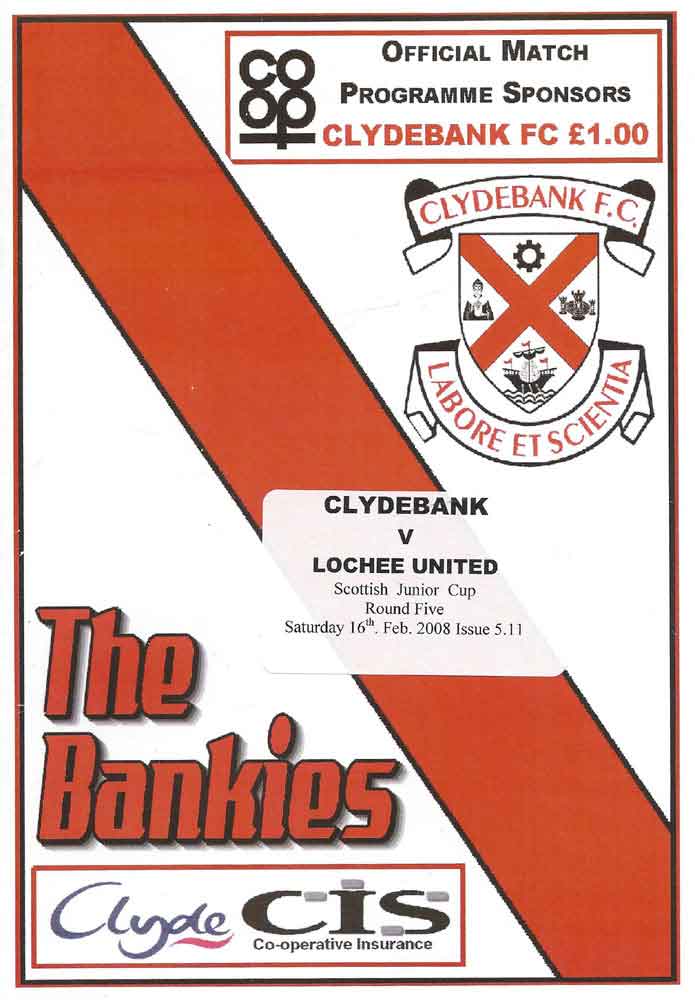 For the second week in a row the Bankies knocked out one of Junior Football's leading lights with a superb performance and even better goals to boot. Lochee United came into this Scottish Junior Cup tie hot favourites as they are sitting second top of the East region Super League, and have a 100% away record. This was reflected in the Bankies 3/1 odds at the Bookmakers.

With defensive star John Cunningham ruled out with injury, Budgie McGhie was wary of making too many other changes. Sutherland came in for Cunningham and Alan Jack started in place of Gordon Lappin who did not even manage a place on the bench.

As per the previous week, the visitors started at a high tempo and tried to pin the Bankies back, however there were 5 minutes on the clock before a shot at goal was recorded. Craig Robertson found himself in space and sent in a shot that had Corr scrambling across his goalmouth, but the ball sneaked wide.

Clydebank were struggling to put any coherent attacks together in the opening fifteen minutes, and it was Lochee who came close again. Mark Hailstones headed clearance was met first time by McMillan from the edge of the box, but his shot sailed high and wide.

Midway through the half the Bankies finally began to assert themselves with two chances in a minute. Firstly, Lennox saw a header stopped after a nice one two by Allum and Bowie, and then Alan Jack tested the Lochee keeper with a long range drive.

Lochee continued to look meancing but the home defence were beginning to get to grips with the United strikeforce. In fact, it was the Bankies who were creating the chances with Craig's first time shot well save by the diving Ross.

The match exploded into life on the half hour as Lochee were denied a penalty as Hardie went down in the box. The linesman siganlled quite clearly that McInnes had touched the ball first.

However, within a minute the visitors took the lead. An inswinging cross from the right by-passed everyone, except the unmarked Hay who bundled the ball over the line at the back post

Paul Richie had a header go well wide from a Dailly free kick, before the equaliser the Bankies support craved finally arrived with half time imminent.

James Lennox takes great credit as his never say die attitude saw him chase down a lost cause and win a corner kick. Alan Jack's dart like cross from the flag was met at the back post by Mark Bowie and he headed home from close range to put the home side back on level terms.

The second half was set up for a real cup cracker and the fans weren't to be disappointed as Alan Jack and Mark Hailstones stamped their authority all over the midfield area.

Alan Jack gave a taste of what was to come with a 25 yard volley that went just wide of the post. A minute later and Lochee were looking for another penalty, but the ref waved away the claims as Middleton appeared to be falling backwards anyway

The action was thick and fast as Alan Jack played a lovely one two with a Lochee defender, but could only fire his shot over the top.

On the 55 minute mark, Middleton tested Corr with a long range effort, and as the game ebbed and flowed Paul Craig took advantage of a favourable break of the ball to send in a shot that Ross had to be alert to stop

A goal was coming, and did so after an hour. Virtually a carbon copy of the first goal, the Bankies defence failed to cut out an inswinging free kick from the right. Despite Packham's best efforts, the ball squirmed across the box into the path of Richie who was on hand to tap in from close range.

The Bankies were almost back on terms 5 minutes later when a nod on from Sutherland, was headed goalbound by Lennox. Unfortunately, it was straight at Ross and the Bankies midfielder received a burst nose for his efforts after colliding with a defender.

The Bankies were knocking on the door, as Alan Jack went close again, this time from a free kick that Ross could only Parry away. Two quick substitutions ensued as the Bankies tried to retrieve the match with Craig and the injured Lennox being replaced by Miller and Fisher

Miller was in the thick of the action straight away, as Alan Jack displayed the most outrageous dirbbling skills on the edge of the box, before playing in the winger. His cross ball was met by Bowie at the back post but he was well marshalled and the keeper saved well.

The equaliser wasn't long in coming and what a fantastic goal it was. Alan Jack picked up the ball just inside his own half and with a remarkable pass picked out Brian Miller on the edge of the box. He laid off the ball delightfully to the incoming Mark Hailstones whose first time shot sailed over Ross in the away goal to set up a grandstand finish.

The momentum was with Clydebank, as the home side sensed victory. Alan Jack cracked in a shot from the edge of the box that whistled just past the post.

On 80 minutes, the Bankies took the lead with a goal that was even better than the Bankies equaliser. Alan Jack picked up the ball 25 yards out fired in a screaming drive right into the top left hand corner, beyond the despairing dive of Ross. A match winner if ever there was one.

The home support had barely got their breath back when Dailly cracked a shot off the upright, and Middleton mishit the rebound with the ball slipping past the post.

the Bluebells made two changes as they found themselves behind for the first time in the game, and Miller received a yellow card for time wasting for the same offence that Robertson, who was not cautioned, was guilty of in the first half.

With two minutes remaining, Watson had a free header well saved by Corr, and was down well to smother the ball at the second attempt. Paul Richie sent another header wide in injury time, as the Bankies held on to record another famous victory

Two stunning victories in the space of a week have sent the Bankies support to Heaven and set up another Scottish Cup quarter final for everyone look forward to. The calibre of opposition that have despatched in the last two weeks, show that this club ,only back in existence for 5 years and controlled by the fans, can now deservedly take their place at the big boys table.