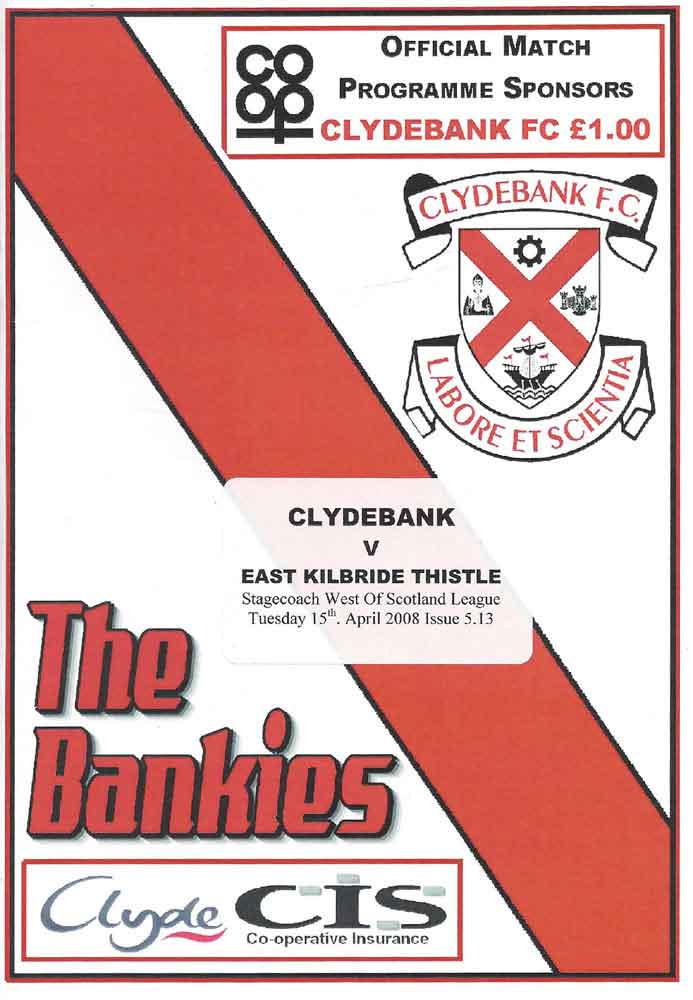 Alan Jack rescued a point with a late penalty strike for the Bankies in a poor team performance as the apparent hangover from the Scottish cup continued for another week.

Despite a number of players still missing though injury, Budgie McGhie was still able to send a relatively strong line up on to the field to face East Kilbride Thistle.

Clydebank Started the match brightly with Mark Bowie shooting high and wide in the opening minute. However, Thistle quickly began to boss the midfield and force consecutive corners without threatening Corrs Goal.

After ten minutes the Bankies put together a neat move with Kenna heading a through ball to Bowie. Unfortunately the ball wouldn't come down to a shooting height quickly enough, and the Thistle defence managed to clear. However, the ball found it's way to Hailstones whose hurried shot was easily collected by ex-Bankies stopper, Wilson.

Paul Craig has been one of the Bankies better performers in recent weeks, and he was pulled down around 25 yards from goal after a menacing forward run. Mark Hailstones took the free kick, but his shot was disappointing and went wide.

As the half wore on Thistle started to push the home side back, with McLaughlin coming close with a twenty yard drive, and after 25 minutes a vicious volley went over Corrs goal.

Thistle forced several corners, as the Bankies struggled to keep any kind of possession. With several players out of position, and no real width in the side, the Bankies were uncharacteristically lumping the ball over the top and handing Thistle possession cheaply.

With 5 minutes left until the break Thistle almost made the breakthrough from a corner. Barry John corr made a great diving save on his right hand side and the ball was finally cleared as the ball pinged around the Bankies 6 yard box

Thistle then missed a hatful of chances, with McLaughlin forcing Corr to parry a shot, then Ward firing over the top. Worst of all, McLaughlin side footed a glaring opportunity over the the bar when the ball was cut back by No8 after he dispossessed Jerry Packham.

Budgie McGhie opted to make no changes at half time, however this only lasted 8 minutes as the same pattern of poor passing and little penetration continued.

Jack and Miller replaced Sutherland and Hailstones after 53 minutes and the match begun to swing in the Bankies favour. Paul Craig made a great run and cross down the left wing. The cross found Miller who slid the ball across the box to Bowie, but he was superbly tackled just as he was about to pull the trigger.

This was much more like it as Jack then Miller had shots charged down in quick succession. After 64 minutes, Jack delivered a fanastic free kick into the box, but Bowie just couldn't make contact.

Minutes later Craig set up Bowie again, but his goalbound shot was deflected for another corner. Paul Craig's frustration was plain to see, and he was lucky to escape with a yellow card after he retaliated to a challenge that seemed fairly innocuous.

With 18 minutes remaining, Clydebank should have scored. Ward attempted to head the ball back to Wilson, but Brian Miller was onto it in a flash. As the ball bounced up, the front man should have put his head through the ball for an easy goal. However, a moments hesitation allowed Wilson enough time to force Miller to make a lunge at the ball with his foot, and the ball bounced around a foot wide of goal

Clydebank continued to push for the opener, and another wicked Jack corner was headed goalbound by Paul Craig. Wilson was finally beaten, but a defender was perfectly positioned to block and clear.

The Bankies failure to convert their pressure into goals came back to haunt them as they fell behind to an appalling goal. Thistle, who had barely threatened in the second period managed to cross the ball into the box from the right hand side. With Corr failing to come off his line, and several chances to clear being passed up by any number of defenders, the ball fell to Strain, who prodded home from 4 yards out.

Alan Jack, was still driving the home side forward but his wild 35 yarder seemed to be more out of desperation. With 5 minutes remaining, Miller had the perfect opportunity to make amends for his earlier miss. He pounced on a defensive error and only had the keeper to beat, however with too much time to think about it, he dragged his shot wide.

You couldn't see the Bankies making another gilt edged chance in the time that was left, but substitute Proctor was to change all that.

Picking the ball up, around 35 yards from goal, he powered his way into the box, only to be felled with a desperated lunge. The ref immediately pointed to the spot.

Taking only one step back, Alan Jack slammed the ball into the corner of the net to rescue a precious point for the Bankies. Relieved to be back on terms the remaining time drained away without further incident.

The Bankies should have but failed to pick up all 3 points for the second match in a row, and with two of the leagues best sides to visit Glenhead Park next week, Budgie McGhie will demanding a higher standard of performance