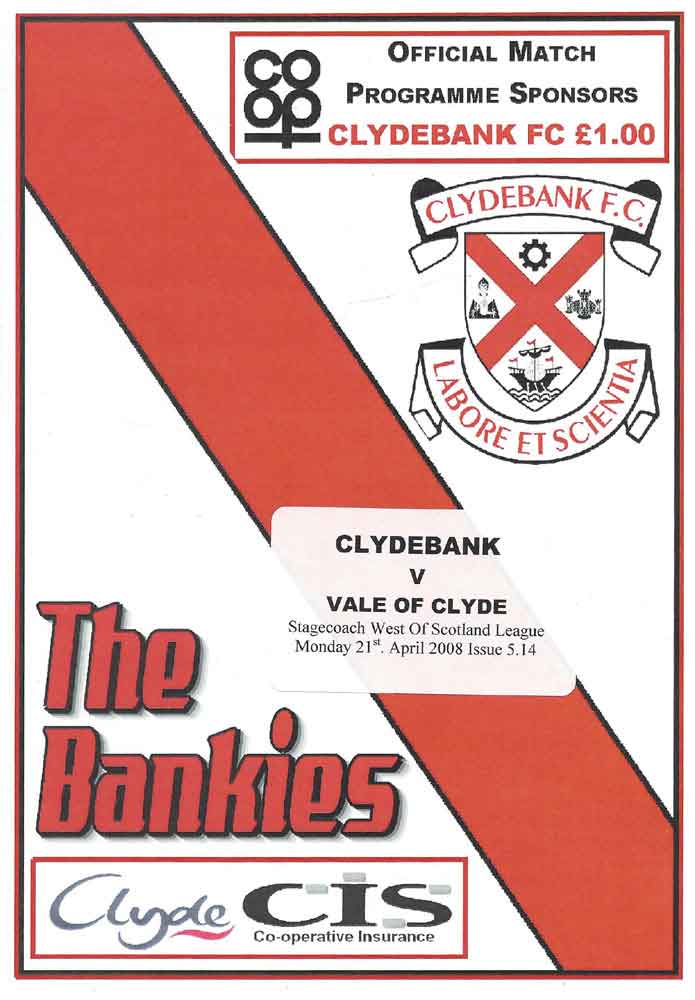 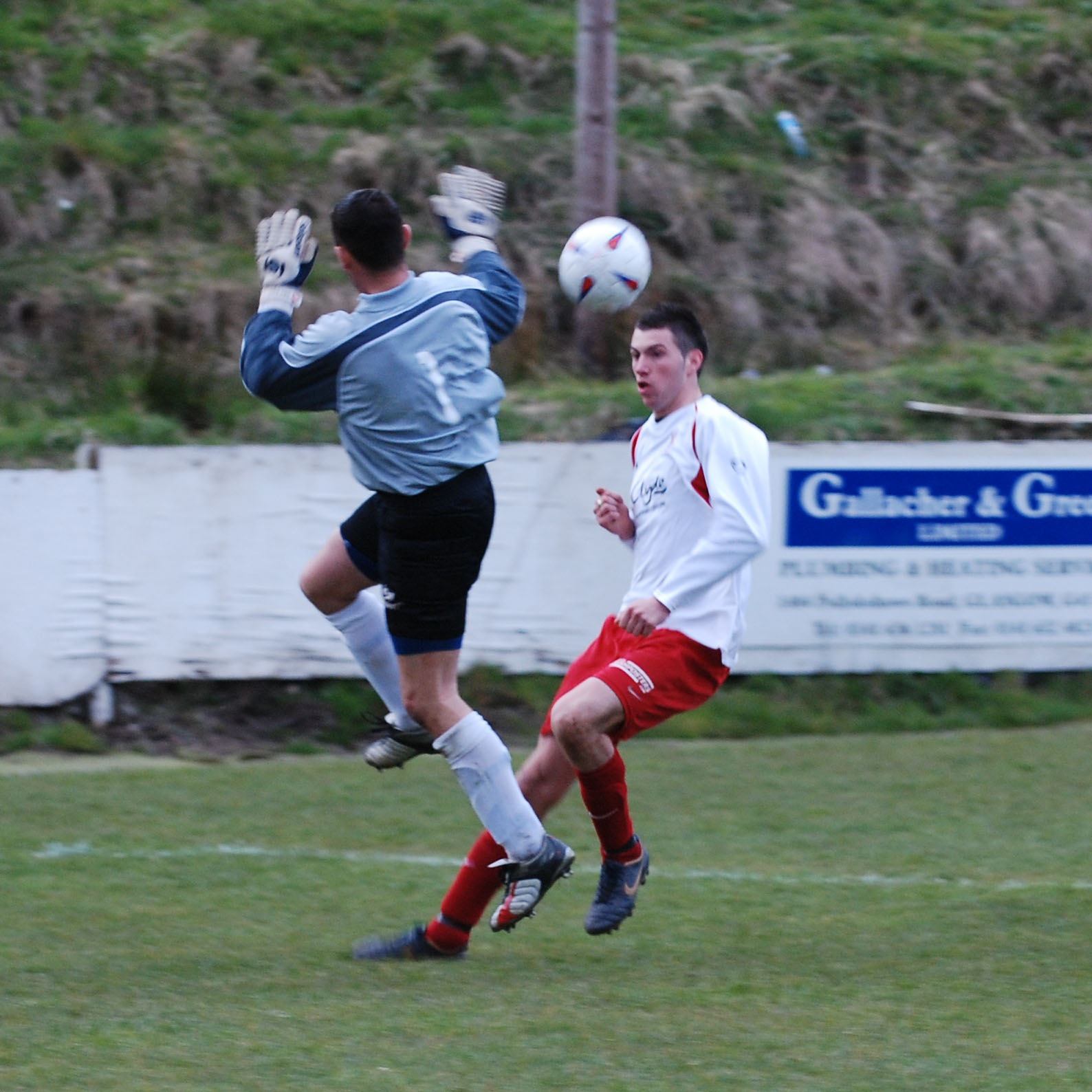 Clydebank's faint promotion hopes now seem to have gone as they lost out by the odd goal in a thrilling contest against title contenders, Vale of Clyde. Two sloppy goals handed the visitors victory as the Bankies now go five in a row without a win.

This was always going to be a testing encounter and Alan Jack returned to the starting line up to give the Bankies more attacking options. Soutar and Docherty filled in for Cunningham, and Allum who are still missing.

After last weeks indifferent performance against East Kilbride, Clydebank went straight into attack in the first minute. Alan Jack fired in a trademark corner kick that McInnes flicked on at the back post to Paul Craig. The big striker claimed for a handball as his shot was charged down, but nothing was given.

With 10 minutes on the clock, Alan Jack almost caught Johnstone out with an audacious lob from the left hand touchline, however the keeper stretched full length to claw the ball away

The match was played at a high tempo, as Vale of Clyde chased and harried at every opportunity, but the home side were equal to the task and the next opportunity came to Martin McInnes, but the Vale defence were quick to block the shot.

As the game ebbed and flowed, chances were thin on the ground, with the Tin pail only managing a free kick effort from Sinclair that was easily gathered by Corr.

Unfortunately, the Bankies contrived to give away a cheap goal for the second match in succession. It was a personal disaster for Martin McInnes whose clearance was passed straight across the box to McLaughlin. Packham threw himself in front of the ball, but only succeeded in diverting the ball past the helpless Corr.

Paul Craig was again having a fine match, and twice created opportunities down the right wing. The first was to Kenna, who just lost out to the Vale Keeper, then to Alan Jack who scuffed his shot straight at Johnstone.

Vale of clyde finished the half strongly as they attempted to cement their lead. Johnstone set up McLaughlin who fired over after forty minutes. Within seconds Alan Jack was defending in his own six yard box as he hooked away a dangerous cross

McLaughlin came close with a header minutes later, and only good positioning by Corr stopped the ball crossing the line. McLaughlin was causing all sorts of problems and another probing run and shot went wide of the post

The final action involved Barry John corr making a mess of a cross ball however the ball was finally cleared much to the relief of the home support.

The Bankies had not reacted to losing the goal very well, however at the start of the second half they came out with all guns blazing. Within four minutes of the restart it was all square.

A long Docherty free kick was won in the air by Bowie on the edge of the box. Paul Craig stretched out and volleyed the ball into the net via the keeper and the post. A goal his play had deserved.

This stung the visitors into action, and Corr redeemed his earlier mistake by making a stunning one handed save from a Morrison drive.

Minutes later, there were strong penalty claims as Hailstones was clearly shoved in the box. This seemed to spur the Bankies on as they enjoyed their best spell of the match

Craig provided Jack with another opportunity, but the midfielder shot wide. Then after 59 minutes Jack rifled a free kick off the wall, and the ball spun high into the air and toward the goal where Johnstone was forced to tip over.

Alan Jack was at the heart of everything, and another stunning strike from the right hand touchline, had Johnstone scurrying to his near post and turning the ball away for a corner.

From the corner the ball dropped at Paul Craig's feet at the back post, but the ball got tangled in his legs and he couldn't get a shot away. The ball found it's way to Lappin who drove the ball viciously, and only a foot wide of goal

Yet again, The Bankies could not turn pressure into goals, and the Vale slowly began to claw themselves back into the match. Substitute Mackin toe poked wide after a poor touch from Lappin.

There was nothing between the sides now as McGregor tested Corr, and from his huge kick out, Hailstones crossed to Bowie. The Vale keeper challenged for the ball but spilled it, but Bowie could not direct the ball goalward.

With fifteen minutes to go. Vale of Clyde scored the decisive goal. And it was another soft goal. McInnes misjudged the ball, and allowed McLaughlin to get a cross into the box. Soutar did well to clear for a corner

From the flag kick, Corr stood rooted on his line and the defence were posted missing as the ball dropped at the back post where McGregor was able to force the ball over the line.

This knocked the stuffing out of the home side, and with the Tin Pail now happy to sit back, it looked like there was no way back for the Bankies. This was compounded when Jerry Packham received a straight red card in the 89th minute for bringing down the goalbound Johnstone.

In an unbelievable ending to the match, Mark Bowie missed the sitter of the season. With all seemingly lost, Brian Miller's last gasp shot was brilliantly touched onto the inside of the post by Johnstone.

It seemed to take an age for the ball to drop out of the air to Bowie, but from no more than four feet out, with the goal at his mercy he managed to smash the ball over the bar and cosigned the Bankies to their first home league defeat in over a year.

The Bankies could easily have won all of their last three matches, but a combination of wastefulness in front of goal, and poor defending has meant only one point being picked up. With three of the top five to play, and a cup match, all in the next week the Bankies will need to up their game to ensure that safety in this division is ensured.