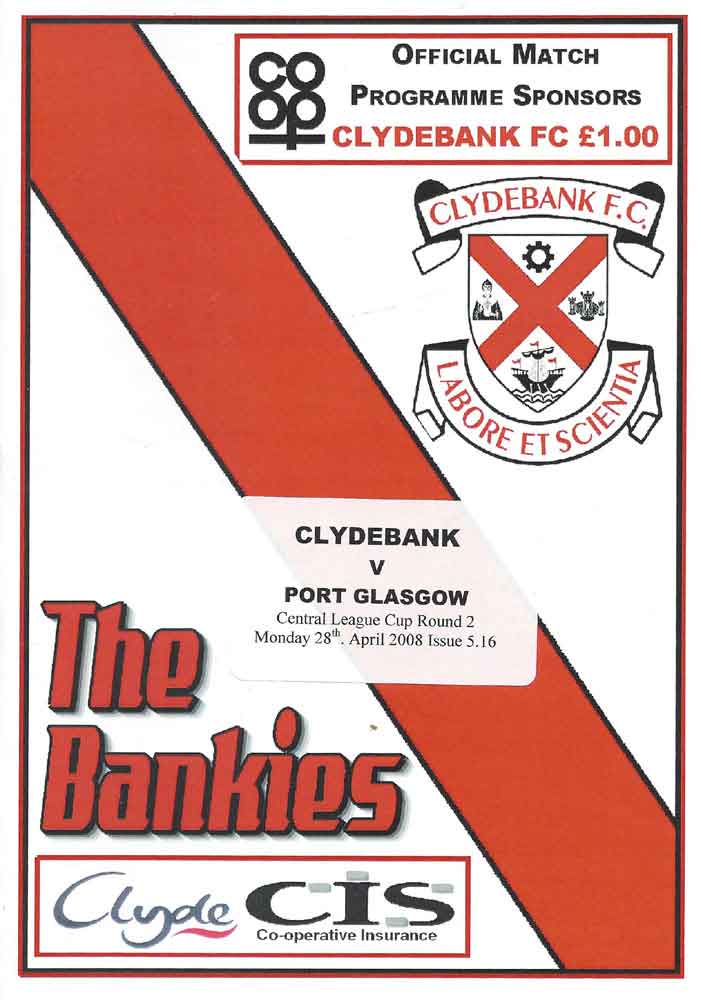 The Bankies continued to ride the crest of a slump as they crashed out of the Central League Cup with a humiliating home defeat against district side Port Glasgow.

In front of the lowest crowd of the season, the players produced a disappointing performance, and the scoreline was a fair reflection of the display.

Coming into this match, a number of players were still missing. McInnes, Craig, and Sutherland were all missing. Regular starters Cunningham, Fisher and Packham could only make the bench, however Allum and Bowie returned to the starting line up.

The match was barely underway when the Bankies had the ball in the net. With under a minute on the clock, Mark Bowie diverted a free kick from the right wing past Graham in the Port goal, however he clearly used his hand and was booked for his offence.

The supporters had hoped this match would be the turning point in recent fortunes, but were to be disappointed after only six minutes when the visitors took the lead. Brown nodded home unchallenged from a teasing cross, despite several Bankies defenders in attendance.

Going a goal down briefly roused the Bankies, with Jack shooting wildly past, and then Miller wasting a decent chance, after receiving a kind break of the ball.

Port Glasgow were looking the hungrier side and could easily have doubled their lead when some calamatous defending allowed a clear strike on goal, however the unlucky Monaghan got in the way and the ball cannonned off him and to safety.

The Bankies were looking like a side short on confidence, as the long ball was being employed more than was necessary, and this was playing into the hands of the well drilled Port Glasgow.

As half time approached only a couple of half chances from Mark Hailstones gave the home fans anything to get excited about, however neither troubled the away goal.

Barry Docherty did not appear for the second half after picking up an injury and was replaced by Jerry Packham who was still suffering from a chest infection.

The fight that has characterised so many of the Bankies games in the past five years did not surface in the second half as the Port attacked stright from the restart.

Brown had a header go wide with Gonet in no mans land. Then, Best was allowed to dribble into the box and shoot unchallenged, which Gonet did well to parry away.

An Alan Jack shot briefly altered the pattern of play, but the ball was soon down the other end with Flynn seeing his shot deflected over the bar by Allum.

After 53 minutes the goal frame came to the Bankies rescue as Brown's shot clipped the top of the crossbar. Brown passed up another chance in the six yard box before the inevitable second goal came on the 75th minute.

THe only surprise is that it took so long to arrive. In what can only be described as comic cut defending, substitute Taylor's weak shot somehow managed to evade three home defenders to cross the line.

Five minutes later and it was three. Gonet was unable to keep a rasping twenty five yard Jack shot from hitting the back of the net despite getting his fingertips to the ball

The game was well and truly over, and despite Alan Jack scoring from the spot in the final minute, nothing could hide the disappointment on the terraces.

Despite the Central League Cup not being a priority, the players needed a positive result to boost confidence, to take into the league programme. Unfortunately, the absolute opposite happened and with another tough week of matches ahead starting with League leaders Rob Roy, Budgie McGhie will be looking for his players to stand up and be counted.