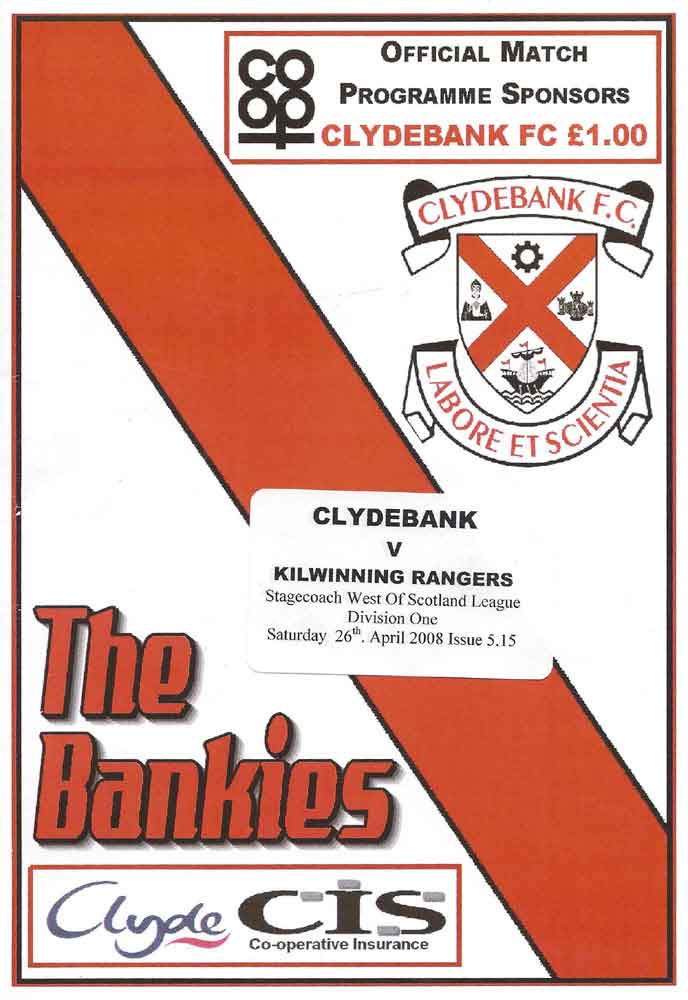 Clydebank's dismal run of results continued this afternoon against Kilwinning Rangers as they went down to a single Stephen Reid strike midway through the first half. The Bankies rallied late on in the second half but were unable to find their way back into the match.

Budgie McGhie has not been able to field his strongest side in quite some time, and today was no different with Allum, Bowie, and Packham all missing. Cunningham did make the bench, and David Fisher made only his second start of 2008.

It was almost a dream start for the home side only 90 seconds into the match, as Alan Jack's wicked free kick deceived everyone and just clipped the outside of the far post.

The game became bogged down after this early excitement, as both side lacked any incisiveness in the last third of the field. McCall Had The Buffs first real opening after 9 minutes when McCall tamely shot wide from 20 yards.

Clydebank replied two minutes later when Fisher scrapped for possession in the away penalty box, but his turn and shot was easily gathered by Ross.

The away side were enjoying better possession, but it was the Bankies who created the next opening when a long Docherty free kick was volleyed over the cross bar by Mark Hailstones.

After 21 minutes Kilwinning had a penalty claim turned down as Orr went down in the box, as he tried to go outside Colin Sutherland. The referee had a clear view of the incident and carded the Buffs front man for his simulation.

Six minutes later and the visitors took the lead. As has so often been the case recently, a distinct inability to clear the ball properly has cost the Bankies dear. This time the ball found it's way to Reid who smashed it low into the corner of the net from 8 yards.

For the fifth match in a row the Bankies lost the opening goal, and at this stage it was difficult to see the home side retrieving the situation, although Paul Craig did manage a header on target after half an hour.

Both sides were only really posing a threat from set pieces with Lappin sending a dangerous free kick into the Buffs box that Paul Craig should have connected with.

Down at the other end, Orr headed straight at Corr from an inswinging corner kick. Just before the break, Lennox passed up perhaps the Bankies best chance of the half, when he headed wide from another good Gordon Lappin delivery.

In an attacking move Brian Miller replaced Sutherland during the break, however the Buffs were to dominate the opening twenty minutes of the second period.

Almost straight away Wilson could have doubled his side's lead, but the ball skidded off the top of his head and wide. Two minutes later, Reid worked some space in the box and his shot called Corr into action.

With only 5 minutes on the clock, Reid again sent in a dangerous cross, that Wilson seemed certain to slide home. However, a brave challenge from Martin McInnes averted the danger. Unfortunately, the injury hit Bankies can add another name to the list as McInnes receieved an ankle injury and had to be replaced

Clydebank finally made an impression after 54 minutes when a Hailstones cross was met by Craig, however the ball was a little high for the front man and was easily gathered by Ross.

Kilwinning continued to look the stronger side, and Reid's first time shot was only a foot over the bar. After an hour Orr, headed narrowly wide from a near post corner kick

A minute later and Kilwinning's best move of the match saw Reid receive the ball at his feet in the box. He laid it off to Wallace who struck the ball low and firm, but the post came to the Bankies rescue, and the score remained the same.

This was a bit of a turning point in the match. Had the ball gone in, it would have been game over, however the Bankies regained their composure and started to build some atacks of their own.

Alan Jack, as ever, started it off with a long range effort that was well off target. Then, Andy Kenna was alert and played a great early free kick down the wing to Brian Miller who delivered a fantastic cross ball into the box. Paul Craig rose to meet it but his header was just over the top.

Despite pressing the Buffs goal, the Bankies were still unable to create a clear cut chance. In fact, a goal could have come at the other end. Barry Docherty, who otherwise had a very good game, got in a bit of a fankle with Corr, and only a last ditch clearance from the keeper spared the blushes.

The Bankies continued to pepper the away goal with a series of free kick and corners, but the buffs defence were standing firm. With 6 minutes remaining, Alan Jack's free kick was the only real shot the Bankies could muster. Unfortunately, his shot was just wide of the post.

Kilwinning made several substitutions to run the clock down, however the ref added on 5 extra minutes due to Martin McInnes' injury. This was enough time to allow the Bankies one last shot at goal. Brian Miller fired in an imaginative volley from the corner of the box, but Ross was alert and saved well as the away side held onto all 3 points.

The league table is making depressing reading with the bottom six now becoming detached. The Bankies still have enough games in hand to ensure survival, but victories will have to start coming, and soon