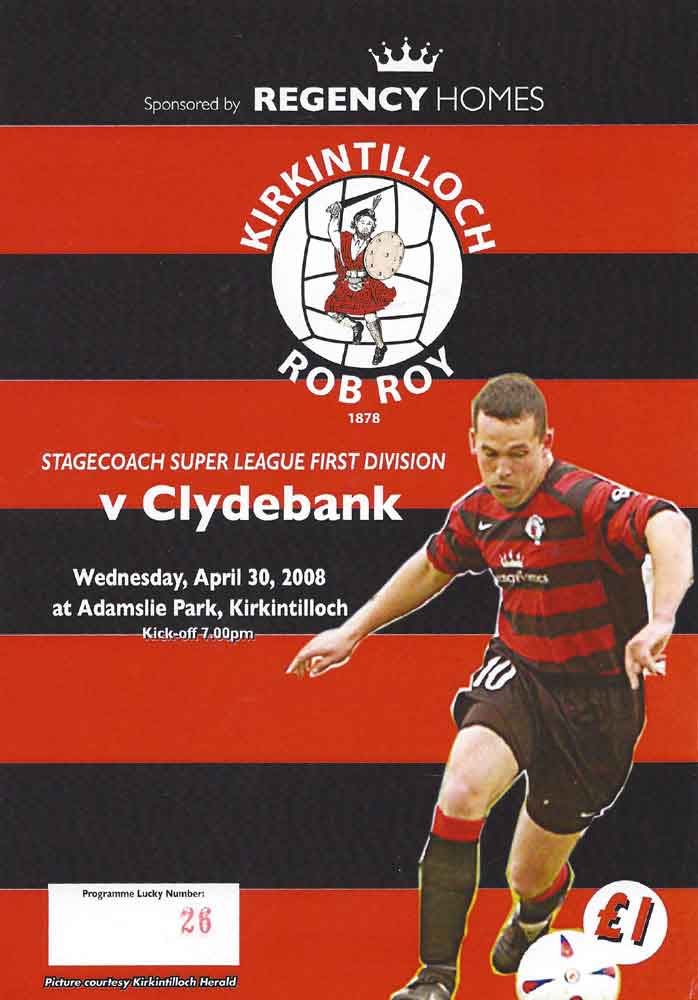 Another game, another defeat. Clydebank's streak of games without a win was extended to eight matches as they succumbed to league leaders Kirkintilloch Rob Roy. This was a much improved display, however the loss of the opening goal at a crucial time proved to be the Bankies undoing, and the Rabs were able to run out comfortable winners as the visitors chased the game.

The pitch just passed an inspection as a major downpour prior to kick off left a lot of water on the surface, and would lead to a tricky conditions for both sides.

In fact, it took both sides a considerable amount of times to adjust to the skiddy conditions. Paul Craig had the first opportunity on goal after eleven minutes when he nodded a Lappin corner over the bar.

A minute later, a Rob Roy corner caused danger, however two home players collided trying to go for the ball and it went over Gonet's crossbar. It was another set piece that brought the next action as Anderson headed wide as the ball bounced up to him at a pace he couldn't control.

With Soutar deputising in the left back position, the Roy were finding some joy down this flank as the Bankies defender was drawn in to his more natural central position. With space on this wing, Chang was able to cross to Zok who headed narrowly wide.

On the half hour mark, Clydebank had a great chance as Fisher was through on Bell one on one. He had every right to go for the ball, and he was unlucky as Bell was able to block his sliding challenge.

Shortly afterwards, Clydebank put together their best move of the half. Packham's early free kick released Hailstones on the right wing, who slid a lovely first time cross ball into the box. Cunningham was on hand to drill his shot goalbound, but a defender managed to block, and some desperate defending saw the ball finally cleared.

The Bankies finished the half on top when a poor clearance fell to Fisher 20 yards out. He drove a first time shot narrowly past, that was just beyond the toe of the stretching Hailstones.

Hailstones did not appear for the second period due to injury, and was replaced by Mark Bowie. Unfortunately, the Bankies were unable to build on their solid first half performance as they fell behind straight away.

A soft free kick was awarded outside the box, and It was flighted in by Chang. The ball was headed home by Maxwell who was totally unmarked. A minute later Vaugh almost fluked a second as his cross was deflected past Corr, but just over the bar.

Clydebank began to press forward for the equaliser, and were unfortunate when Lappins mishit shot hit the underside of the bar. Despite three Bankies players in attendance the ball fell kindly to the Rabs defender who was able to clear.

The Bankies continued to push forward, and Lennox had an attempt deflected over the bar. From the corner, Cunningham was surprised to find the ball at his feet, but was hurried and was unable to steer his shot on target.

After 60 minutes Rob Roy doubled their advantage. Again, the left back position was exposed as a two on one situation allowed a cross into the box that was nodded on to Maxwell at the back post who slammed it past Corr.

It was the classic sucker punch, and a minute later it was almost three as an acrobatic shot from Campbell rattled the upright. It didn't take long for the third to come when Packham was beaten for pace on the right hand side. The ball was slid across the box to McQuilken who made no mistake from 8 yards.

With the game now won, the home side were content to play on the break, and were able to restrict the now despondent Bankies to only a handful of long range efforts. Substitute Kirkwood could have completed a miserable night for the Bankies by adding a fourth in injury time, but fortunately his shot hit the side netting.

The Bankies matched the league leaders in the first half of this match, but the loss of the first goal yet again when games have been finely balanced has proved decisive. Had Lappin's shot gone in at one-nil it may have been a different game, but it was not to be and the home side showed why they are top of the league. Another five games to come in the next nine days, may well prove to be vital in the club's quest to stay in this division.