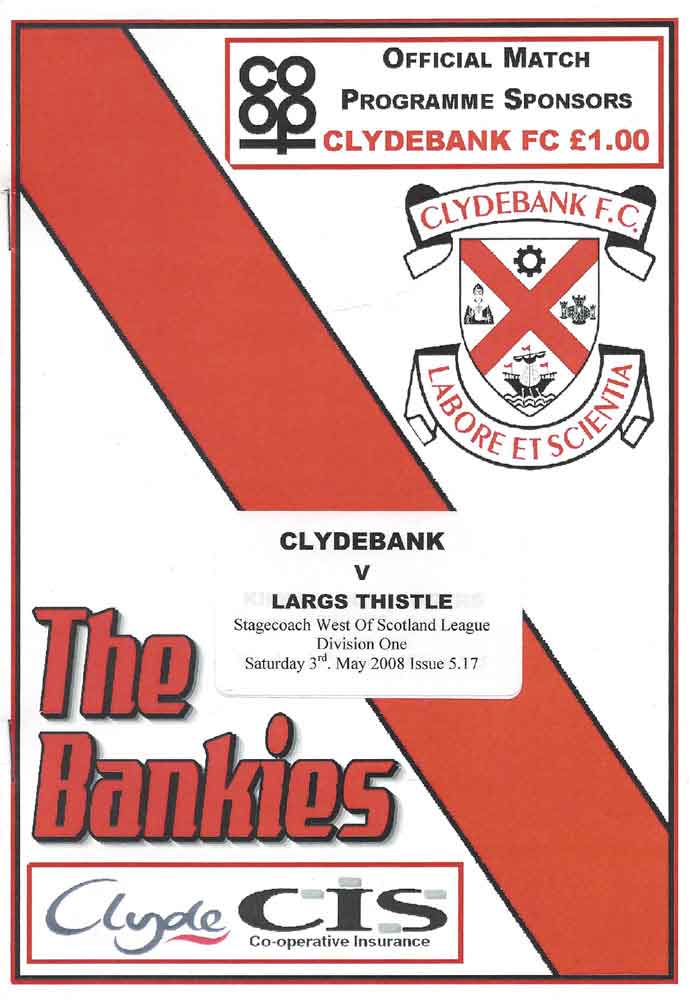 An Alan Jack free kick salvaged a point for 10 man Bankies against Largs Thistle in the dying minutes of a match that looked destined to become Clydebank's fourth consecutive home defeat.

With Paul Craig being ordered off earlier in the half, and the visitors taking the lead with only ten minutes remaining, the Bankies supporters seemed resigned to another defeat.

However, when Andy Kenna was fouled just outside the box with only minutes remaining, Alan Jack stepped up to sweetly strike the free kick into the net. This was Jack's fourteenth goal of the season, and could be one of the most vital as the Bankies desperately look to reverse their fortunes.

Coming into this match the Bankies had only recorded one victory in their last nine league matches, and were in desperate need of a result as they had slipped into the relegation zone.

In a tense opening to the match, neither side were showing much in the way of incisive play. Paul Craig scuffed at shot straight at McWilliams early on, and Lennox headed over the bar from a Fisher free kick.

Clydebank had the better of the early stages without testing the Largs Keeper. Allum headed the ball in the direction of Hailstones in the box, but the Bankies front man, who recently notched up 150 appearances for the club, could not find the strength to trouble McWilliams.

As the half hour approached, Largs had their first good chance of the match when Molloy showed neat skill in lobbing the ball over Lappin, before volleying the ball past the post.

A minute later, and the Bankies were denied a penalty. Hailstones appeared to be blatantly impeded as he tried to reach a cross ball, however the ref allowed play to continue

As half time approached, Molloy and Marks both found their way into the refs book for fouls whilst McClure brought proceedings to an end for the break with a shot the was miles off target.

Goals have been at a premium for the Bankies recently, and with chances already thin on the ground in this match, the supporters felt that any decent chance that presented itself would have to be taken.

Only three minutes into the second period and such an opportunity arrived. A delightful ball over the top from Soutar found Hailstones in good space. However, he did not strike the ball cleanly, and the Keeper was able to make a comfortable diving save at his near post.

Largs, needing victory to keep their slim promotion hopes alive, were awarded a free kick on the edge of the box, but Molloy wasted the opportunity by blasting the free kick several yards over the bar.

The match was starting to have all the hallmarks of a goalless draw when events took a swing in Thistle's favour. Clydebank had earned a corner, and Paul Craig was jostling in the box when a Largs player went down. The ref was immediately surrounded by angry Thistle defenders. and although he didn't see the incident, the linesman had his flag up. After a short consultation, Craig was ordered from the pitch and the Bankies were in trouble.

Largs upped the pace as they sensed they could use the extra man to their advantage. Despite a goal not looking likely, Largs finally did take the lead after 80 minutes when Marks stole in at the near post ahead of Soutar to calmly side foot past Corr.

This script was becoming all too familiar for the Bankies support, and when Largs almost doubled their lead from a Marks lob, that had packham scurrying to his own goal line to clear, then their didn't seem any way back

However, with time almost gone Alan Jack fired in the free kick to earn a draw for the home side which over the piece was just about deserved.

Under the circumstances, a draw was a fair result. If the Bankies are to stay in this division, then they need more invention in front of goal as 5 goals in 9 games - 2 penalties and a free kick among them - is relegation form.Next up in the league is Vale of Clyde and Kilwinning away from home, both of whom are vying for the second promotion spot. The task ahead could not be more daunting.