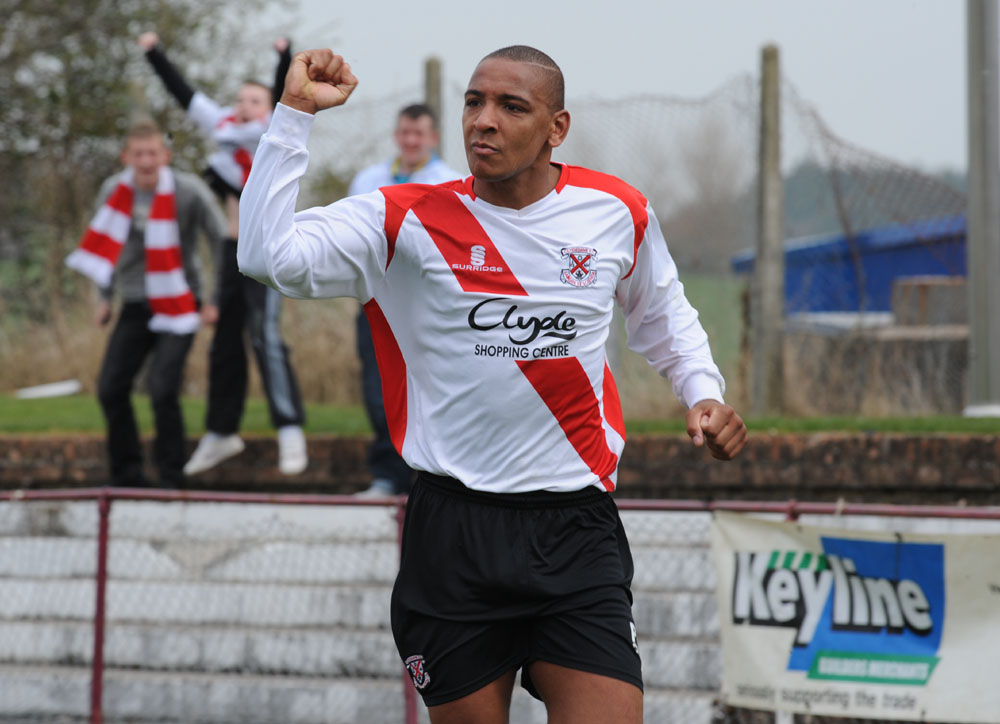 Clydebank began their marathon promotion bid this afternoon with a one nil victory over Maybole at Ladywell Stadium, thank to a Chris Mackie headed goal on the stroke of half time. It was a Jekyll and Hyde performance as the Bankies dominated the first half, but found themselves under pressure for most of the second.

Budgie McGhie shuffled the pack again, as the need to keep legs fresh over the next few weeks will be vital. Soutar came in for his first start since the Glenafton match four weeks ago, and Jones and Cairney kept their places in the side from Wednesday's victory over Arthurlie. .

Maybole began the brighter of the two sides, but apart from a couple of crosses into the box, they were not posing a significant threat. It took the Bankies a while to get started, and Mackie playing the lone front man again was being well marshalled by the Maybole defence. It was Mackie, however, that created the first opportunity of note when he won the ball in the air, and Hailstones rifled a volley well over from 20 yards.

Clydebank started to take a grip in midfield with Hailstones and Jones providing the support to Mackie that was absent in the opening exchanges. Jones, in particular, delivered several inviting cross balls that were asking to put away. Midway through the half the Bankies should have taken the lead when Allum saw a shot block from a Mackie cross, the clearance rebounded out to Jones who was unlucky to see his first time volley hit the side net.

Pressure was steadily building on the home defence, as Jones shot over again from a Hailstones lay off. With only minutes of the first half remaining Chris Mackie missed as good a chance as you are likely to see. A fine passing move, on a difficult pitch, down the left wing saw Billy Jones flight in a perfect cross into the box. A Maybole defender allowed it to drop over his head and Mackie brought it down on his chest beautifully. However, with only the keeper to beat he managed to turn his shot into the ground and wide of the goal.

With the last action of the half, Mackie redeemed himself. Again, the danger came down the left wing, and it was the unlikely figure of Martin McInnes who curled in a left footed cross deep to the back post. Chris Mackie peeled off and perfectly looped the ball back across goalkeeper and into the net.

Clydebank were well worth their half time lead, despite a low amount of scoring opportunities. Supporters were looking forward to see if the players could come out and finish the match and cruise home with the three point safely in their back pocket. However, Maybole had other ideas, as they began the second period in a much more aggressive manner.

The Bole were not creating any chances of note, but were dominating the middle of the park, as the Bankies appeared to leave their midfield in the dressing room at half time. Time and time again, the Bankies were sitting too deep allowing Maybole to carry ball into forward positions. Chris Mackie cut a lonely figure as he was becoming isolated from the rest of the side, and hid frustration was beginning to show. Despite this, Clydebank were the only side getting shots on goal, albeit wildly wide efforts from long range.

McGhie introduced John Jack, and Brian Smith to try and arrest this. Although, it worked to a degree, the pattern had been set and Clydebank became more determined just to hang onto what they had. It is clear to see why Maybole are in danger of being relegated, as they hardly threatened the Bankies goal in second period despite seeing a lot of the ball. In fact, the closest they came was when Stefan Gonet saved bravely at the feet of Kerr as he almost go on the end of knock on.

The Bankies defence prevailed, as they successfully ran the clock down and took the points back to Clydebank. It was a vital three points to claim, as the Bankies closed the gap on Renfrew to 8 points with 8 games in hand. Another massive games lies in wait on Monday against second placed Rutherglen, where the Bankies can potentially reduce the margin between the sides to 7 points with the Bankies having 4 games in hand.