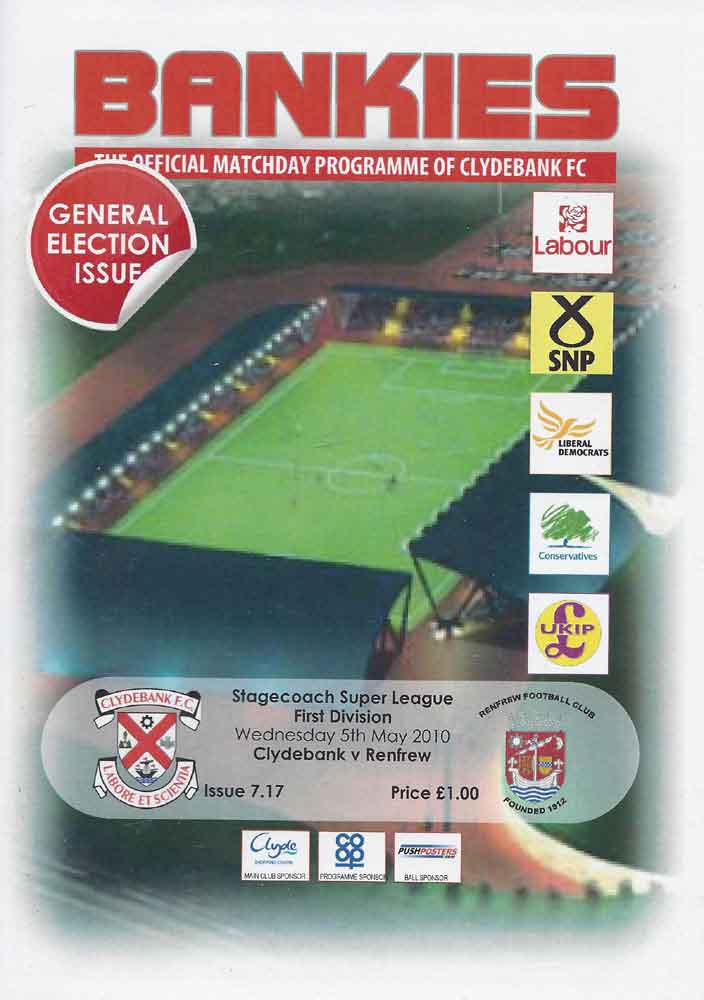 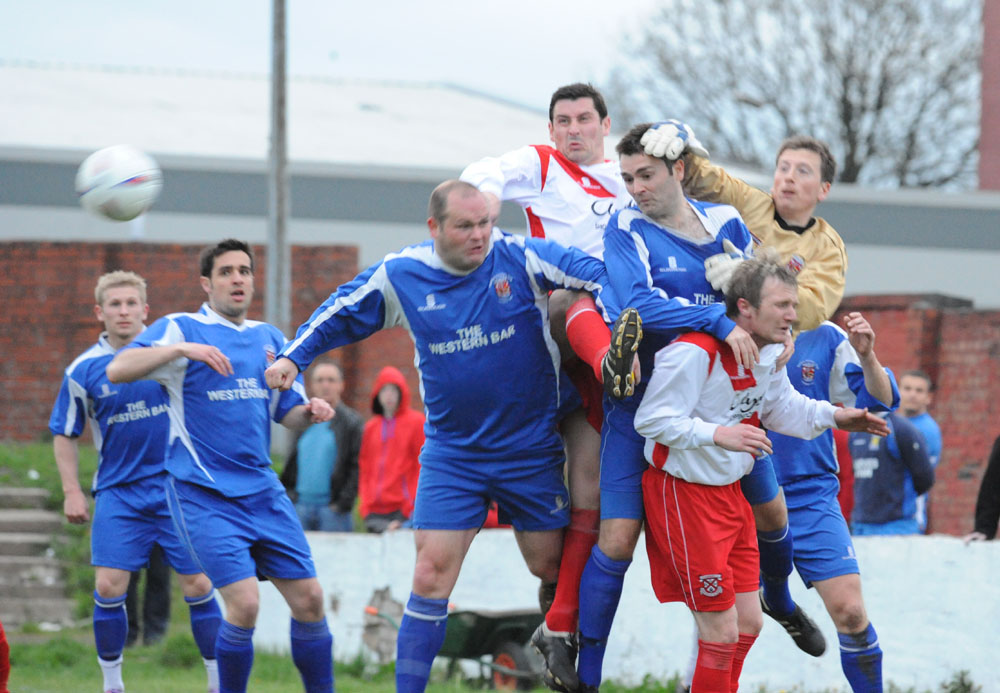 Clydebank moved to within six points of Renfrew after the Bankies deservedly triumphed by a goal to nil as the two sides clashed at Holm Park tonight. Substitute, Chris Mackie headed a late winner to give Clydebank a great chance of claiming the third place play off slot, at the very least.

Budgie McGhie made two changes from the line up at Annbank on Saturday with Gonet and Jack replacing Liam Campbell and Molloy who dropped to the bench.

The first half was a drab affair with both sides guilty of misplaced passes, and long, aimless punts up the park. The pitch was fiery due to the recent dry weather, so if you are being kind you could add this to the equation.

The Bankies created the two best chances of the half. The first was after quarter of an hour when Dymock powered a header over the bar from a John Harvey free kick, and towards the end of the period McInnes fizzed a header wide of the post from a great Billy Jones corner kick. Renfrew’s sole opportunity came when Reid cut inside from the left wing and cracked a shot well wide of the mark.

Budgie McGhie urged his players at the break to up the tempo in the second half and the players responded. Within a minute Harvey hit a first time ball into the box that deceived Quigley. Cairney controlled the ball but screwed his shot from 12 yards wide of the post. Minutes later and John Harvey’s cross-cum-shot had the goalkeeper scrambling to touch the ball over the bar.

With Clydebank looking to be more offensive, Renfrew began to pose a threat on the break. From a quick break, a long diagonal ball was played down the left wing, and Prentice swept the ball to the back post where Reid sclaffed the ball past the post when he really should have scored.

Clydebank continued to apply the pressure, and a mazy run from Cairney produced a through ball that was poked away by Currie from Dymock just in the nick of time for a corner kick. The Bankies were forcing a series of corners, and Jones’ deliveries were giving the Renfrew keeper all sorts of problems. A half-cleared effort by Sexton saw Brian Smith crash in a shot that was blocked by a defender. There was a huge shout from both the players and terraces for handball, but the ref waved the claims away.

Quigley was lucky to avoid a yellow card after conceding two bad free kicks in a row. Gary Lynn struck one of these from 25 yards, only for it to be deflected goalward by the wall. Sexton did well to adjust his footing, and scoop the ball away from his near post. At the other end, Renfrew’s most effective player, Fulton, had a snap shot from the edge of the box that Gonet dealt with comfortably.

With time starting to get on, Mackie replaced John Jack, and he made his mark almost immediately. With only 14 minutes remaining, the big striker rose above the Renfrew defence to head home a Harvey corner kick with virtually his first touch of the ball.

Defeat was unthinkable for Renfrew, as third place in the league was visibly slipping from their grasp. They began to throw men forward, and as they left gaps at the back they paid a heavy price. Clydebank broke up field with Dymock and Mackie in a two against one situation with Currie. Dymock attempted to skip past the Frew defender, and he blatantly handled the ball. Action replays will be needed to determine whether the incident took place in the box, or not. In any event, the ref said it was outside. Currie was given straight red card for the offence, and as he walked off the park, so did Renfrew’s chances of getting anything out of the match. From the resulting free kick, Lynn slipped the ball inside to Cairney who smacked the ball sweetly. With the goalkeeper beaten it took a defender to just get his head to the ball and turn it over the bar.

The ref added on three minutes of stoppage time, and the Bankies cruised over the finish line. Results elsewhere were kind tonight with Whitletts going down to Glenafton, and Cumnock losing at Girvan. This means that Clydebank now have the play off slot firmly in their sights. It is important not to take the eye off the ball now, as there is still work to be done.