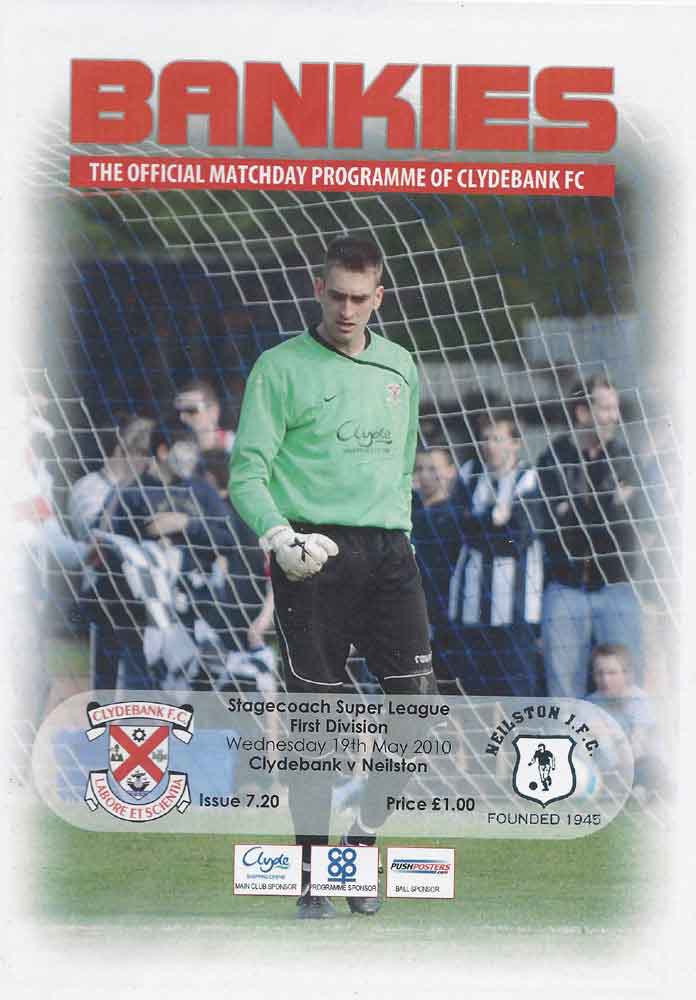 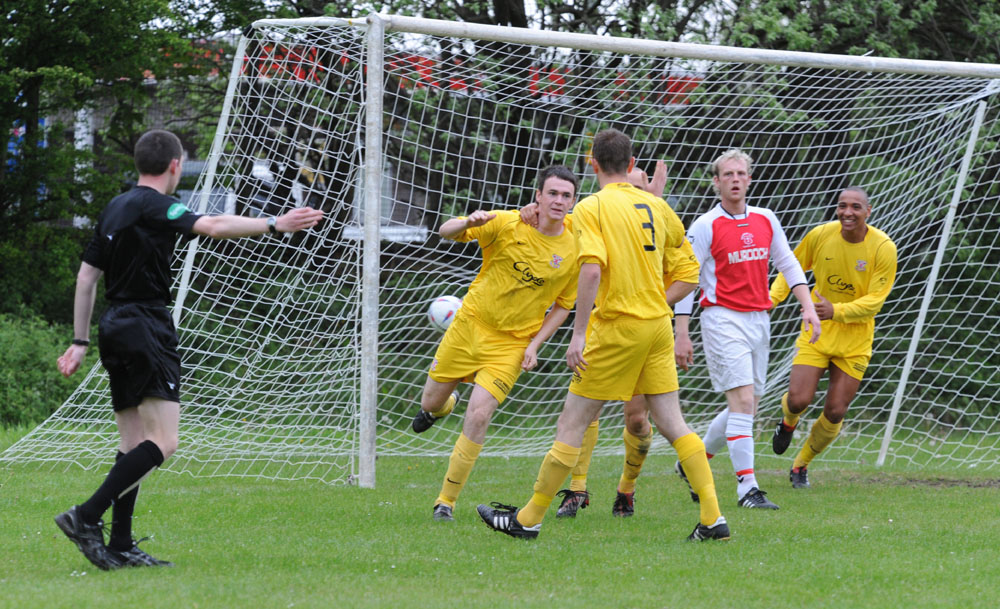 Clydebank’s dreams of automatic promotion to the Super Premier League faded away tonight as they could only muster a draw against bottom and relegated club, Neilston. Despite the club now being on a nine match unbeaten streak, the mammoth task that was in front of them finally became too much.

After Monday’s stunning win at Rutherglen, Budgie McGhie made several changes, many of which were enforced. Liam Campbell, John Harvey, Alan Vezza, Martin McInnes, and Mark Kilpatrick all came in to the starting line up. And, trialist Mark Fitzsimmons kept his place in the side after his superb injury time winner at the Clyde Gateway Stadium.

It was the young midfielder who made his mark yet again when he opened the scoring for the Bankies after two minutes. A Gary Lynn free kick from the right hand side was knocked across the six yard box by Kilpatrick and Fitzsimmons timed his run perfectly to ram the ball into the net. A minute later and the youngster almost scored again when he collected the ball at the edge of the box and hit a fierce shot that Wilson did well to hold.

The Bankies were in the position of not only needing wins, but goals as well to try and overcome Cumnock in the lead, and it really did look promising at this early stage. However, Clydebank failed to capitalise further on their good start, and gradually Neilston - with nothing to play for - started to come into the game.

A warning was sent out after 15 minutes when McMillan shot past narrowly after a neat passing move on the right wing. Two minutes later and the visitors levelled from a corner kick. Vezza was marking Hobbs at the near post, but ran out to try and cut off a short corner. As a result Hobbs wasn’t picked up and when the ball came into the box, the ex-Bankie was free to head the ball into the corner of the net.

Clydebank tried to respond positively, and Fitzsimmons had a low shot well saved by Wilson after 22 minutes. Neilston were threatening just as much at this stage with Acquah and Hobbs both having long range shots.

Alan Vezza missed, perhaps, two of the best chances the Bankies created either side of the interval. The first one was a dangerous inswinging cross from a trademark John Harvey free kick. Unfortunately, Vezza just got too much on it and the ball flew about a foot over the bar. Five minutes into the second period, Chris Mackie strode down the left wing, when he released Kilpatrick who outpaced Fraser and whipped in a cross from the bye-line. Vezza shot from around six yards at the back post, but as bodies were thrown in front of the ball, it deflected handily straight to the goalkeeper.

Clydebank were building good pressure and this was the spell when a goal looked most likely. McInnes got his head to a Jones corner, but Kilpatrick got in his way and the ball flew past the back post. Then, after 56 minutes, Cairney was handed a fantastic chance by Kilpatrick who neat ball through was completely missed by a defender. It was a tight-ish angle, but Cairney should have done better than lashing the ball over the bar.

With the Bankies pushing up the park, Neilston almost scored twice with breaks in quick succession. Substitute, Evans dribbled forward and cracked in a low shot that Campbell saved comfortably. Then, in the next passage of play, the pacy Acquah got behind the Bankies defence. He seemed certain to score when he slipped it past Campbell but the ball wet wide of the post much to the relief of the home support.

With only 11 minutes remaining the Bankies tried to up the tempo once more, and Vezza missed his third great chance of the night when he toe poked the ball wide from close range after Paul Allum sent in a teasing cross from the left wing. It was underlined that it just wasn’t going to happen for the Bankies when minutes later a huge clearance up the park by Liam Campbell was chased down by Allum. He lifted the ball over the advancing Wilson only to see his effort bounce off the top of the cross bar.

Neilston could have stolen it near the death when Armour had a shot from the edge of the box brilliantly save by Campbell who had to dive full length to his right to turn the ball away to the right. There was still time for Billy Jones to get a header on target, but again Wilson saved it with ease.

The referee added on five minutes of stoppage time due to Neilston’s incessant time-wasting which included a protracted substitution caused by a “mix-up” with shirt numbers, and the surreal sight of a Neilston player pretending he couldn’t find the ball when it went out for a corner. It was an aside, as the Bankies should have done enough over the piece to earn victory, but the exertions of the past few weeks mean that automatic promotion was just a bridge too far.

Clydebank are not yet guaranteed a play off position, but Whitletts find themselves in the same position the Bankies were in, having to win all their matches and overturn a 12 goal differential. One more point will be enough to secure the spot for the Bankies, and the chance of promotion is still achievable if Lanark or Petershill can be overcome.